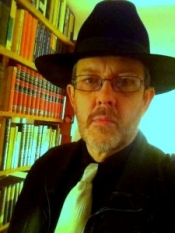 “I was dreamin' when I wrote this. Forgive me if it goes astray.”

After reading through their latest blog posts, this eloquently sums up what must be going on in the minds of some of our most beloved Neo-Catholics. As the Church burns in a five alarm helmet fire, I decided to peruse the Neo-Catholic best and brightest to see what light they were shedding on this crisis of unprecedented proportions unleashed by Hurricane Francis.

First I wandered over the National Catholic Register and clicked on the Commentary section. I quickly started scanning for any commentaries on Pope Francis. I scanned…and scanned…and scanned. Finally I came to an article entitled, “A Pope a President and a Bishop.” However, after clicking on it, I quickly learned it was about John Paul II, Ronald Reagan and Fulton Sheen. Another recent article reflected on Mother Teresa.

I then clicked on Fr. Dwight Longenecker’s page on the site and came across nothing about Francis, but did find an article from over a year ago titled, “Sts. Faustina and John Paul Prove Providence Triumphs Over Politics.” Good to know.

I then wandered over to the Blogs section. I found another article on Mother Teresa, (who the article notes has now been dead twenty years).

Finally I did find an article with Pope in the title called, “When the Pope Praises You and the World Puts You on a “Hate” List.” I scanned the article looking for the reference to Francis and found this:

Pope Francis, easily recognized by not only Catholics but by other Christians and those of various faiths around the globe, is one of the few veritably unitive purveyors of love in modern times. As such, the discerning mind is correctly led to surmise that the Holy Father is a worthy assessor of what constitutes authentic love.

Wow. Then reading further in the article, what do you know? Look who shows up again:

Nearly 30 years ago, Saint John Paul II (who embraced essentially the same views on chastity, on marriage as between one man and one woman, on the importance of the family, on the right to life for the unborn, and other comparable positions that the modern culture finds repugnant to popular sensibilities) wrote his apostolic exhortation Christifideles Laici: On the Vocation and the Mission of the Lay Faithful in the Church and in the World. This man, who is now in heaven…

You get the idea.

Then I noticed a name I had not heard in quite some time.  The verbose Neo-Catholic apologist “Cowboy” Dave Armstrong.  Cowboy Dave is best known for the encyclopedic stream of consciousness rambling tomes he used to post on his now defunct website and now posts on Facebook. On his old website, which looks like it may have been hosted by Geocities, Dave devoted an entire webpage full of linked articles railing against every aspect of Traditionalism. We are proud to say that The Remnant alone comprises two of the links which take up almost 200KB of pure text.[1]

Any doubt I had that Dave would stick to his Neo-Catholic bona-fides was destroyed back in 2014 when, far from distancing himself from Francis, Dave did a reverse 4 and a half somersault pike off the high dive of papolatry right into the pool of Neo-Modernism by writing, “Pope Francis Explained: Survey of Myths, Legends, and Catholic Defenses in Harmony with Tradition.” 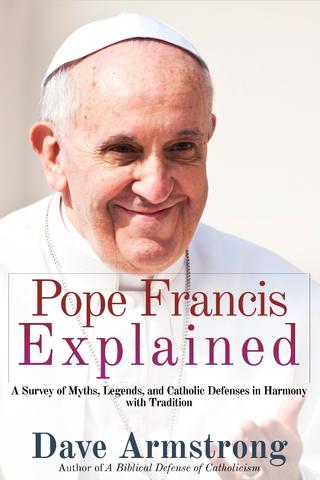 Yes for only $2.99 (no idea why the cost would be that low), you can learn the truth about how the following Francis blunders were all perfectly orthodox:

In any case, Dave’s latest on The Register is entitled, “Luther's Disgust Over Protestant Sectarianism and Radical Heresies.” Thus, while the Church burns, blind guides like Cowboy Dave prattle on about Protestant apologetics like it's still 1999 and all we have to worry about is debating James White on audio tape. All the while the man has zero clue that his own pope is rehabilitating Luther & praising him, not to mention that he also condemns Dave’s apologetics as “solemn nonsense.”

Meanwhile, as Dave and the rest of the Neo-Catholic blogosphere are driving their time machine DeLorean to relive their glory days, It's getting so bad in the real world that even if Francis proclaimed from St. Peter's that the Eucharist is merely symbolic, I doubt any Cardinal, Bishop or Priest would rise up and say "Anathema!" Instead, we'd probably just get a very respectful letter from Cardinal Burke and his one living Cardinal friend politely asking the Holy Father what he meant when he said the Eucharist is merely a symbol.

Then everyone would yawn and life would go on as our heresiarch pope blathers on. It might raise a Neo-Catholic eye-brow or two, but only Phil Lawler at Catholic Culture and a few others who are starting to move their eyelids as they come out of their coma.

We have to ask ourselves at what point does this man finally cross the line and whatever remaining Catholics we have left physically enter St. Peters and throw him in the Tiber? Francis has already obliterated Catholic teaching on Matrimony, Penance, and the Eucharist and in doing so, opened up a Pandora's Box of erroneous rationale to justify any sort of sin. Are we supposed to simply live as Catholics with a heresiarch as pope as long as he doesn't proclaim his errors ex cathedra? Are we going to have a cornucopia of modernist saints alongside our ecumenical directory & “irreversible” Novus Ordo Mass?

At this point we have indeed reached a scary moment where it is becoming apparent that not a single member of the hierarchy is willing to stand up for the teaching of Jesus Christ against a man who is spreading error, lies, and sin, throughout the universal Church. I honestly think he is so emboldened at this point that he feels he can do whatever he wants with absolutely zero consequence. For if tomorrow he denied Christ rose from the dead, would anyone care?[2]

For He said to him, “If they do not listen to Moses and the Prophets, they will not be convinced even if someone rises from the dead.”

[1] If you’d like to do penance experience Dave’s style of apologetics, please check to see his response to this article.  I predict it will consist of no less than 2,000 words, including Dave meticulously defining terms used in hyperbole in order to prove I exaggerated. I get bonus points if he name drops Fr. James Hardon, SJ.

[2] Some argue Benedict XVI denied the dogma of the Resurrection in his book Jesus of Nazareth. Thus Francis declaring it openly is not that far-fetched.

[Comment Guidelines - Click to view]
The Remnant values the comments and input of our visitors. It’s no secret, however, that trolls exist, and trolls can do a lot of damage to a brand. Therefore, our comments are heavily monitored 24/7 by Remnant moderators around the country.  They have been instructed to remove demeaning, hostile, needlessly combative, racist, Christophobic comments, and streams not related to the storyline. Multiple comments from one person under a story are also discouraged. Capitalized sentences or comments will be removed (Internet shouting).
The Remnant comments sections are not designed for frequent personal blogging, on-going debates or theological or other disputes between commenters. Please understand that we pay our writers to defend The Remnant’s editorial positions. We thus acknowledge no moral obligation whatsoever to allow anyone and everyone to try to undermine our editorial policy and create a general nuisance on our website.  Therefore, Remnant moderators reserve the right to edit or remove comments, and comments do not necessarily represent the views of The Remnant.
back to top
Last modified on Saturday, September 9, 2017
Tweet

More in this category: « Tea With the Curate: “Do you accept the Council?” Money Trail Revisited »