2022 America: The Fruit of Vatican II 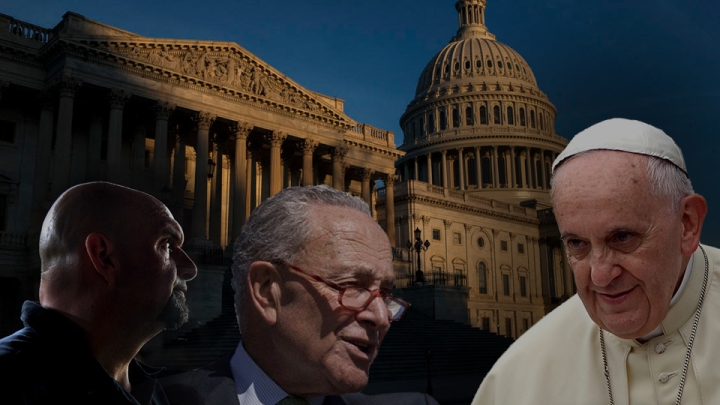 The midterms are the accent point on the decline of our nation ever since it adopted the pernicious doctrine of religious liberty at its founding. The same pernicious doctrine taught by Vatican II. Namely, the absurd notion that a secular agnostic state is somehow the Catholic ideal rather than one that recognizes Our Lord and His religion as true. What are the fruits? What began as a vast majority Christian nation has now devolved in under 250 years to a nation where only 63% of adults even identify as Christian and 30% of US adults are religiously unaffiliated. On top of that, of these 63% who identify as Christian, we know that a large % are "Christian" in name only.

Far from the conservative morality of the founding fathers, states in our nation are now enshrining "trans" rights and abortion past birth into their Constitutions with one state electing a man who has trouble forming complete sentences or thoughts. This is in addition to the moral evils of no fault divorce, contraception, same sex "marriage" and adoption, as well as pornography, immodesty, casual sex, and shacking up becoming the norm between the sexes. In addition to that you have churches vandalized at will with no repercussions and those Christians who disagree with moral depravity being sued in federal court for violating “constitutional rights.”

We were cast off from the protection of the Catholic Confessional state to rely on secularists, heretics, schismatics, apostates, agnostics, atheists, pagans, and adherents of false non-Christian religions.

This is the doctrine, referred to by Gregory XVI as an "insanity," that Vatican II and John Courtney Murray attempted to illicitly foist upon the Catholic Church pretending that such a previously condemned doctrine could ever be Her doctrine. It has been crystal clear for some time now where the fruits of this evil doctrine lead. For is it not madness to believe a religion is the one true religion and then propose that it should have no more rights in the public square than satanism, paganism, or any of the other myriad false religions? Is it not madness to not have a political state in place that respects and shows reverence for Our Lord and His religion as well as protects and respects those citizens who are members of His Church?

Instead of this natural order of things, we were instead cast to the wolves of secularism by our supposed pastors. We were cast off from the protection of the Catholic Confessional state to rely on secularists, heretics, schismatics, apostates, agnostics, atheists, pagans, and adherents of false non-Christian religions to secure whatever meager civil rights we are afforded by an increasingly hostile and anti-Christian state.

Instead these men at Vatican II, in full complicity with Paul VI, condemned us to live in an agnostic prison.

Look around you at these latest mid-terms and take it all in. These are the rotten fruits of the political system adopted by Vatican II. The rotten fruits of a secular system of government set up by Masonic Deists. A system that the architects of Vatican II dared to try to adopt as the Church's own political system. They proudly dared to try to cast off the supernatural responsibility every Catholic has to try to bring about a state that recognizes Our Lord Jesus Christ as King over society and government and every facet of our public life as well as our private and spiritual lives.

This architects of this robber Council have deprived all of us of our birthright and natural right as Catholics to live in a state that protects us, our Faith, and our moral doctrine with the legitimate power and enforcement of a Catholic government. Instead these men at Vatican II, in full complicity with Paul VI, condemned us to live in an agnostic prison. One increasingly growing more hostile to us and our Catholic religion by the day as the inevitable rot of societal decay sets in. A rot that is the sure result of an agnostic state that refuses to recognize the one source of all legitimate authority, Christ the King.

Latest From RTV — NYPD COP: On Vaccines, Violence & Victims of the New Normal

[Comment Guidelines - Click to view]
The Remnant values the comments and input of our visitors. It’s no secret, however, that trolls exist, and trolls can do a lot of damage to a brand. Therefore, our comments are heavily monitored 24/7 by Remnant moderators around the country.  They have been instructed to remove demeaning, hostile, needlessly combative, racist, Christophobic comments, and streams not related to the storyline. Multiple comments from one person under a story are also discouraged. Capitalized sentences or comments will be removed (Internet shouting).
The Remnant comments sections are not designed for frequent personal blogging, on-going debates or theological or other disputes between commenters. Please understand that we pay our writers to defend The Remnant’s editorial positions. We thus acknowledge no moral obligation whatsoever to allow anyone and everyone to try to undermine our editorial policy and create a general nuisance on our website.  Therefore, Remnant moderators reserve the right to edit or remove comments, and comments do not necessarily represent the views of The Remnant.
back to top
Last modified on Sunday, November 13, 2022
Tweet

More in this category: « Has Rome Lost the Faith? (Viganò's Letter to a Cloistered Nun) The Red Waive: “Conservatives” Sidestep Pro-Life »