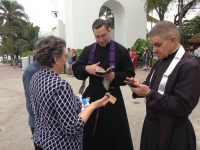 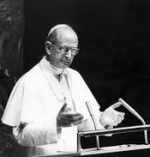 Everybody’s favorite whipping boy these days, the Society of St. Pius X (SSPX), is evidently not in schism after all—at least according to a recent EWTN report featuring a Vatican bishop (Mons. Juan Ignacio Arrieta, of the Pont. Council for Legislative Texts) admitting what The Remnant has maintained for two decades—that the SSPX is not in schism. “We can say that the problem with the SSPX is only a problem of trust,” said Arrieta, “because they are people who pray, people who believe the same things we believe in…they have their heart in Rome. I can assure you of that since I know them well.”

EWTN reported this? Yes, and kudos to them for having the courage to say what needs to be said about a difficult and most complex question.

The SSPX 'Schism': EWTN vs. CMTV 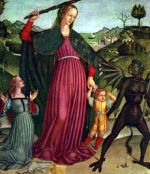 Scripture relates about Satan the following: “Now the serpent (Satan) was the most cunning of all the animals that the Lord had made…But the Serpent said to the woman: “You certainly will not die! No, God knows well that the moment you eat of the fruit of the tree in the middle of the garden, your eyes will be opened and you will be like gods who know what is good and what is evil. So she took some of its fruit and ate it; and she gave some to her husband…Then the eyes of both were opened and they realized they were naked.”

We have here the Head of Satan, with its fangs of hatred of God and man, stripping Adam and Eve and the whole human race of the wedding garment of Sanctifying Grace and leaving us all in the nakedness of sin, in the death of the soul, in the nothingness of damnation as enemies of God.


Would the brilliant French poet, Charles Pierre Péguy, still compose these imaginings uttered by God about France? How would the poetry of the devout Péguy capture the Catholic faith in post-modern France? Surely, Péguy would notice the empty cathedrals, the greying congregation, and the apathy of baptized, but lapsed Catholics and the grim reality of Catholicism supplanted by secularism.

Will the terrorist massacres of Charlie Hebdo bring France back to its knees?

Pope Francis’ homily for the latest consistory of cardinals meeting in Rome this week is being called a re-statement of his programme for his pontificate. Fr. Thomas Rosica, his English language spokesman, wrote on Twitter: “More than anything I’ve heard from (the pope) today’s homily is his mission statement.”

Let us assume for a moment that the pope knows the implications of what he is saying, and that the people closest to him are telling the truth when they say, repeatedly, that the things that are happening are happening at his behest, and examine what this “mission statement” has to say to the Church.

Francis is clearly signaling, again, his intentions for the Synod and the future envisioned at it by the Kasper faction. The question of Communion for the divorced and remarried is never named, but the terms describing the issue are unmistakable. And they are wholly on the side of the Kasperites, adhering without an iota of divergence from the basic presumption in Kasper’s proposal: that the law of God must be overturned or ignored for the sake of extending the mercy of God. A contradiction that is totally incompatible with all of Catholic theology, with logic and natural reason.

At first consideration, one might not think of "On the Waterfront" as a promising movie to portray Catholic values. The director, Elia Kazan, was of Greek heritage and born in Istanbul (old Constantinople) of Greek Orthodox parents in the final days of the Ottoman Empire.  Kazan turned his back on his faith as an adult. The producer, Sam Spiegel, was a Jew born in the later years of the Austria-Hungarian Empire in what is now southern Poland.  Screenwriter Budd Schulberg was Jewish-American, the son of a Hollywood producer.

The film’s musical score was written by Leonard Bernstein, a Jew who would become infamous for his notorious left-wing political views.  The film’s lead actor, Marlon Brando, was an irreligious method actor who would be conspicuous for his decadent life-style.  How did this non-Catholic group of individuals construct a film that was not only extraordinary in its power but Catholic in its values?