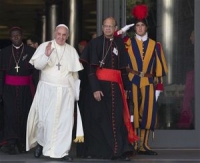 Does the Catholic Church Still Believe in Mortal Sin? Hell? Damnation? Sins that Cry to Heaven for Vengeance? The Ten Commandments?

The New York Times, Time and The New Yorker are exuberant about the contents of the mid-Synod document on homosexuality. The Huffington Post calls it a “dramatic shift.” Reuters says the document challenges the Church to “change its attitude” toward those who practice perversion, the sin of Sodom. These times are interesting indeed.

Synod Nods to Sin of Sodom 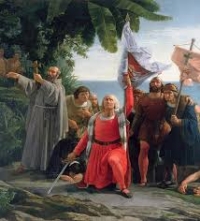 Many others, and not just traditionalists, have already expressed outrage over the disastrous “Relatio post disceptationem,” which appeared on the Vatican website today, October 13. This is the anniversary of Pope Leo’s vision of Satan’s attack on the Church (leading to his composition of the Leonine prayer suddenly abandoned after Vatican II), the Miracle of the Sun at Fatima, and the derailing of the Second Vatican Council by Cardinal Liénart’s violation of the procedural rules in seizing the microphone in order to demand new drafting committees for the conciliar documents.

The Secret Synod Does What We Expected: Evil

There is an old political axiom that has apparently been totally lost on the people in charge of the Synod: how something looks is often more important than what it is. In our times, the question asked most often by smart political advisors is "How does this look?" Optics, and how to avoid other people manipulating it for you, is particularly now in the age of Twitter at the heart of modern political life, but also seems to be one thing the Vatican simply can't grasp.

But what outsiders need to remember is that this is a very common problem in Italian politics in general. For centuries, Italian rulers have just done whatever they wanted, and whoever didn't like it could just go jump. The Italian national characteristic most abhorred by the other races is certainly their arrogance and total disinterest in anyone who does not seem immediately useful. Anyone who has ever taken a walk in Rome and had to stop and specifically ask the Romans crowded around the outside of the coffee bar to please move over the three inches required to pass on the sidewalk - and received the cold, blank Roman stare in response - will be familiar. They will often simply treat other people as though they are not there, and will pretend to be surprised when a person magically appears out of nowhere asking them to get out of the way.

A shockingly blunt title indeed. But as entirely predictable events unfold in the New Synod Hall—wherein, we are told, all things will be made new—why should we bother with nuance? After all, we have a Pope who is no friend of nuance and whose intentions could not have been more crudely expressed over the past eighteen months of astonishing insults and denigration of practically all the elements of apostolic and ecclesiastical tradition. Francis has clearly been preparing for this moment since the day of his election, if not before, and now it has arrived in all its inglorious splendor.

Let us call this Synod what it is: a secretive, manipulated, progressive-dominated cabal, led by septuagenarian and octogenarian diehards of the conciliar “renewal,” who are rushing to finish their “work”—so rudely interrupted by Pope Benedict—lest death release the Church from their clutches before they are quite done.

The Secret Synod Freak Show, Brought to You by Pope Francis

Let’s just pass on from all the debate on what Francis intends and face up to this, and ask some questions about what the concrete effects this change will have on the Church. I am not a prophet and I don’t have any occult scrying device. No crystal ball is needed when one has the basics of the Faith and logic. Let’s see what we come up with.
Monday, October 6, 2014

In honor of the 100th anniversary of St. Pius X’s death, I am re-printing an article originally written by the Rev. Simon FitzSimons and published in The American Catholic Quarterly Review in 1908. Over a century later, Rev. FitzSimons’ brilliant insight into the driving forces behind this heresy as well as its remedy are needed more than ever. Writing shortly after Pascendi was published Rev. FitzSimons is able to give us a unique “fly on the wall” perspective of a Catholic living at that time. In this fourth installment, Rev. FitzSimons exposes the fallacies behind the Modernist quest and explains why it is doomed to failure. Without further ado, I give you the Rev. SimonFitzSimons…Chris Jackson

“…they seem to forget that it has not been the Church's custom to remodel her beliefs to suit the epoch or to adapt them to the changing follies of the times; nay, that, on the contrary, her proudest boast is that she has remained unchanged in the midst of a constantly changing world; indeed, that her immutability is bound up in and inseparable from her indestructible vitality. They seem to overlook the important fact that if you change the essence of a religion, you have no longer the same religion, but a new one, and that when you expunge from a creed all that is vital you may indeed make a new creed, but you have the old one no longer.” Rev. Simon FitzSimons

The other day, a bishop in Algeria, the former head of the Dominican Order in France, Bishop Jean-Paul Vesco, on the website of the weekly magazine La Vie, made defense of the Kasper plan, to “pardon” those who have left their marriage, taken a civil “divorce” and entered into a second adulterous connection. The Catholic world is in turmoil over the possibility that this apparently common practice in Germany will be allowed formally throughout the world, and some powerful voices thunder against it, with the Pope, except for a few brief words of warm praise in the beginning, still silent.

Now we have the “pardon” instead of forgiveness of sins, covering instead of deleting them. Obviously, for the simple reason that repentance is difficult, too difficult for ordinary people.

(Penned by the son of the famous British novelist, Evelyn Waugh, Reprinted from The Remnant, July 31, 1977)

"If Paul VI excommunicates the Archbishop he will effectively be announcing that he has set up a new Church in rivalry to the old one."

After all the saber rattling and threats to excommunicate Archbishop Marcel Lefebvre, leader of the traditionalist faction within the Catholic Church, a curious silence has descended on the Vatican.

Nobody has brought out the traditional bell, book and candle.  No comment has been made of any sort.

The Archbishop’s next move was to celebrate Mass before a crowd of 4,000 in the casino at Nice in the South of France – perhaps he’ll turn up at the Lyceum Ballroom one day.

A caution to the reader: What follows is a very harsh assessment of the current pontificate. I felt compelled to write it, but no one is compelled to read it. I am nothing and nobody in the great scheme of things, although I am privileged to contribute to the record of a venerable traditional Catholic journal that will surely have its place in the history of these times. I have no illusions that my little lamentations will have any effect on the Pope, for whom I pray each day, or on events in the Church. But at least I, at least The Remnant, at least traditionalists in general will be able say one day, concerning what was done to the Bride of Christ, “Not us. Not us.”

Here is an inescapable truth that ought to trouble every Catholic: Francis is the first Pope in the history of the Church to be universally lauded by “the rulers of the world of this darkness… the spirits of wickedness in the high places.” (Eph. 6:12) Even Barack Obama, a veritable forerunner of the Antichrist, is “hugely impressed” by Francis. There is no need to demonstrate yet again the copious outpouring of the world’s unprecedented praise for a Roman Pontiff. The world’s love affair with Francis has woven itself into the very Zeitgeist, as any Internet search for the terms “Pope Francis” and “revolution” will reveal. “Woe unto you when all men shall speak well of you! for in the same manner did their fathers to the false prophets.”