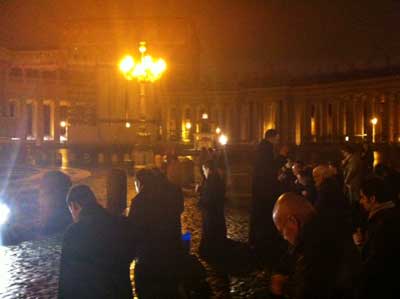 (ROME) On a cold and rainy night here in Rome a fairly sizable gathering of Catholics gathered in the Piazza San Pietro to pray the rosary (in Latin). Led by five or six young priests in cassocks, they knelt on the wet stones of the Piazza and begged Mary's intercession, with a final prayer to St Joseph (this time in Italian). As I was walking back to my hotel when I discovered them kneeling there in the light rain, I filmed them for a moment and then joined them. After all, I suppose that’s exactly where we all need to be during this dark night for the Church...on our knees, praying for the beloved Bride of Christ.

(ROME) Like the song says—no, there’s really not much news to tell you. The conclave is all set. Tomorrow is the big day. Solemn Mass will be offered at 10 am in St Peter’s by the Dean of the College of Cardinals, Angelo Cardinal Sodano.