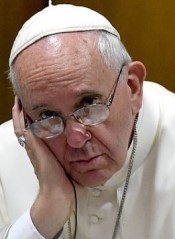 THE REVOLUTION OF Pope Francis is far more vulnerable than he wants the world to think it is. By his own admission, Francis set out to fundamentally change the Church founded by Christ Himself, whose doctrine is based on Holy Writ and whose praxis is rooted in 2000 years of Catholic Tradition.

Even despite Vatican II, such papal hubris is unprecedented in the history of the Church and is bound to encounter significant opposition.

Today, February 12, 2020, we have been given welcome proof of the extent to which this pontificate has jumped the shark.

After all their threats and boisterous bloviating at the Amazon Synod about the coming ordination of women deacons, the Apostolic Exhortation turned out to be much ado about nothing, with the pope quite rightly admitting that to admit women to Holy Orders “would in fact narrow our vision; it would lead us to clericalize women, diminish the great value of what they have already accomplished, and subtly make their indispensable contribution less effective.”

Francis’ Exhortation is called Querida Amazonia, which means “Beloved Amazon”, and although it argues that “inculturation” is “necessary” for the Amazon people—and praises “indigenous expressions of religiosity”—it falls well short of the mark when it comes to the threatened ordination of women and married priests, causing the German bishops to accuse the pope of lacking the courage needed to truly "reform" the Church.

Is this only a temporary setback for the Francis agenda? It would seem so.  After all, they’re still recovering from their Pachamama Pagan Pope scandal, which not only blew up the entire Catholic world but also caused the Vatican's Protestant "dialogue partners" to go into full-on scandal mode.

Damage control was in order. But let's not underestimate the power of the Holy Ghost. Let's pray Francis is finally beginning to realize that the Church is not his plaything, and that his duty before God is to preserve and defend what was handed down to him, not "reform" it.

So for the moment at least, and even through Francis is still hell-bent on turning the Church over the United Nations and the climate change gestapo, let’s thank God that Francis blinked in the face of worldwide opposition to his radical ecclesial agenda.

Let’s also thank God for Cardinal Raymond Burke, Archbishop Carlo Maria Viganò, Bishop Athanasius Schneider, Cardinal Robert Sarah, Cardinal Muller and the other brave bishops and priests who sent a clear message to Francis that they would not remain silent in the face of the Amazon Synod’s scandal and promised violation of the Church’s constant, infallible and unchangeable teaching.

And, finally, hats off to the entire traditional Catholic world of “rigorist” “neo-Pharisees” who stood up and resisted Francis to his face. The Apostolic Exhortation offers proof that the Holy Ghost has not left us orphans, that Our Lady’s intercession is powerful indeed, and that traditional Catholic resistance is absolutely vital now as God continues to strengthen the resolve of key members of proper authority in the Church who, even after fifty years of diabolical collegiality, are beginning to break ranks and stand with Christ and Tradition against the Modernist revolution of Vatican II.

Keep praying, friends. This is far from over.

[Comment Guidelines - Click to view]
The Remnant values the comments and input of our visitors. It’s no secret, however, that trolls exist, and trolls can do a lot of damage to a brand. Therefore, our comments are heavily monitored 24/7 by Remnant moderators around the country.  They have been instructed to remove demeaning, hostile, needlessly combative, racist, Christophobic comments, and streams not related to the storyline. Multiple comments from one person under a story are also discouraged. Capitalized sentences or comments will be removed (Internet shouting).
The Remnant comments sections are not designed for frequent personal blogging, on-going debates or theological or other disputes between commenters. Please understand that we pay our writers to defend The Remnant’s editorial positions. We thus acknowledge no moral obligation whatsoever to allow anyone and everyone to try to undermine our editorial policy and create a general nuisance on our website.  Therefore, Remnant moderators reserve the right to edit or remove comments, and comments do not necessarily represent the views of The Remnant.
back to top
Last modified on Wednesday, February 12, 2020
Tweet

More in this category: « Nero and Bergoglio St. Valentine »