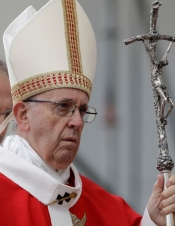 In our last installment we focused on parallels between King Herod and Jorge Bergoglio, occasioned by the parallel Francis of Rome made between Herod and those who build walls, namely, President Trump. This time The Last Word suggests a certain parallel between Bergoglio and another infamous biblical figure from the past, whose name does not appear in the Bible though his number does: 666-Nero Caesar.

Among the many atrocities committed by Nero Caesar, two stand out beyond the rest: the persecution of Christians and the murder of his own mother. It was Nero who imprisoned Saints Peter and Paul and had them executed and it was Nero who burned Christians as torches and fed them to animals for sport. As for his mother, multiple times he attempted unsuccessfully to murder her, with poison, by crushing her and by drowning her. Finally he sent assassins to stab her to death. As they approached her with their daggers drawn poor Agrippina exposed her belly and said, “Stab me here, in the womb that bore such a monster.”

Now we are not accusing Jorge Bergoglio of physical murder and matricide but we do accuse him of persecuting faithful Christians, spiritually murdering the souls he misleads, and attacking the Blessed Mother. The most recent examples of his spiritual matricide are the enthronement of Pachamama idols in Saint Peter’s Basilica by Jorge himself and his irreverent remarks on the Feast of our Lady of Guadalupe:

Faithful to her Master, who is her Son, the only Redeemer, Mary never wanted to take anything from her Son. She never presented herself as co-Redemptrix. No, disciple…She never stole for herself anything from her Son … When they come to us with stories saying we have to declare this, or make this or that other dogma, let us not get lost in nonsense [tonteras].

This is a free article from the January 31st Remnant Newspaper. Want more?

As with the ancient Roman Senate, which feared the monster Nero and so approved of his matricide, similarly modern Roman Prelates give their tacit assent to the Monster Bergoglio in his attacks upon the faithful and the Blessed Mother, with few notable exceptions. Most recent among these exceptions is the former Papal Nuncio to the United States, Archbishop Carlo Maria Viganò, who wrote this denunciation:

Pope Bergoglio once again gave vent to his evident Marian intolerance, recalling that of the Serpent in the account of the Fall, in that Proto-Gospel which prophesizes the radical enmity placed by God between the Woman and the Serpent, and the declared hostility of the latter, who until the consummation of time will seek to undermine the Woman’s heel and to triumph over her and her posterity. The Pontiff’s intolerance is a manifest aggression against the prerogatives and sublime attributes that make the Immaculate Ever-Virgin Mother of God the feminine complement to the mystery of the Incarnate Word, intimately associated with Him in the Economy of Redemption….

Pope Bergoglio no longer seems to contain his impatience with the Immaculate, nor can he conceal it under that seeming and ostentatious devotion which is always in the spotlight of the cameras, while he deserts the solemn celebration of the Assumption and the recitation of the Rosary with the faithful…

Papa Bergoglio uses the pachamama to rout the Guadalupana. The enthronement of that Amazonian idol, even at the altar of the confession in St. Peter’s Basilica, was nothing less than a declaration of war on the Lady and Patroness of all the Americas, who with her apparition to Juan Diego destroyed the demonic idols and won the indigenous peoples for Christ and the adoration of the “Most True and Only God,” through her maternal mediation. And this is not a legend!

Finally, a Prelate has denounced unequivocally the Monster creating spiritual mayhem: Jorge Bergoglio! And not only for his outrages against the Blessed Mother but also his attacks upon Holy Mother Church:

The tragic story of this failed pontificate advances with a pressing succession of twists and turns. Not a day passes: from the most exalted throne the Supreme Pontiff proceeds to dismantle the See of Peter, using and abusing its supreme authority, not to confess but to deny; not to confirm but to mislead; not to unite but to divide; not to build but to demolish.

Material heresies, formal heresies, idolatry, superficiality of every kind: the Supreme Pontiff Bergoglio never ceases stubbornly to humiliate the highest authority of the Church, “demythologizing” the papacy. His action seeks to violate the Sacred Deposit of Faith and to disfigure the Catholic Face of the Bride of Christ by word and action, through duplicity and lies, through those theatrical gestures of his that flaunt spontaneity but are meticulously conceived and planned, and through which he exalts himself in a continuous narcissistic self-celebration, while the figure of the Roman Pontiff is humiliated and the Sweet Christ on earth is obscured.

But wait, there is more! Not only does the Archbishop denounce Papa Bergoglio, as he refers to him in his declaration, but also the Vatican II Revolution that has been undermining the Church for decades:

For more than six years now we have been poisoned by a false magisterium, a sort of extreme synthesis of all the conciliar misconceptions and post-conciliar errors that have been relentlessly propagated, without most of us noticing. Yes, because the Second Vatican Council opened not only Pandora’s Box but also Overton’s Window, and so gradually that we did not realize the upheavals that had been carried out, the real nature of the reforms and their dramatic consequences, nor did we suspect who was really at the helm of that gigantic subversive operation.

Thus, over these last decades, the Mystical Body has been slowly drained of its lifeblood through unstoppable bleeding: the Sacred Deposit of Faith has gradually been squandered, dogmas denatured, worship secularized and gradually profaned, morality sabotaged, the priesthood vilified, the Eucharistic Sacrifice protestantized and transformed into a convivial Banquet...

Now the Church is lifeless, covered with metastases and devastated. The people of God are groping, illiterate and robbed of their Faith, in the darkness of chaos and division. In these last decades, the enemies of God have progressively made scorched earth of two thousand years of Tradition. With unprecedented acceleration, thanks to the subversive drive of this pontificate, supported by the powerful Jesuit apparatus, a deadly coup de grace [death blow] is being delivered to the Church.

Lastly, Archbishop Viganò implies that this unprecedented apostasy may be ushering in the Apocalypse:

The advent of the Antichrist is inevitable; it is part of the epilogue of the History of Salvation. But we know that it is the prerequisite for the universal triumph of Christ and his glorious Bride. Those of us who have not let ourselves be deceived by these enemies of the Church enfeoffed in the ecclesial Body, must unite and together face off against the Evil One, who is long defeated yet still able to harm and cause the eternal perdition of multitudes of souls, but whose head the Blessed Virgin, our Leader, will definitively crush.

Thank you, Archbishop, for your courageous and timely words. The Last Word could not have said this nearly so well and with such impact. Blessed Mother, please continue to bless and protect your faithful son, Archbishop Viganò. As for the Bergoglio papacy, please crush the head of this horrible monster! 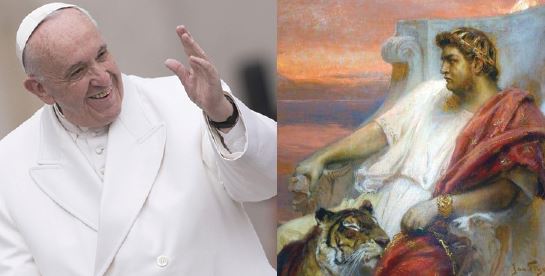 [Comment Guidelines - Click to view]
The Remnant values the comments and input of our visitors. It’s no secret, however, that trolls exist, and trolls can do a lot of damage to a brand. Therefore, our comments are heavily monitored 24/7 by Remnant moderators around the country.  They have been instructed to remove demeaning, hostile, needlessly combative, racist, Christophobic comments, and streams not related to the storyline. Multiple comments from one person under a story are also discouraged. Capitalized sentences or comments will be removed (Internet shouting).
The Remnant comments sections are not designed for frequent personal blogging, on-going debates or theological or other disputes between commenters. Please understand that we pay our writers to defend The Remnant’s editorial positions. We thus acknowledge no moral obligation whatsoever to allow anyone and everyone to try to undermine our editorial policy and create a general nuisance on our website.  Therefore, Remnant moderators reserve the right to edit or remove comments, and comments do not necessarily represent the views of The Remnant.
back to top
Read 2983 times Last modified on Friday, February 7, 2020
Tweet