Why Modernists Hate the Immaculate Conception 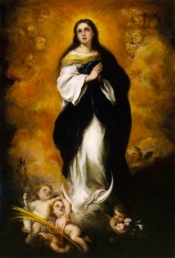 On this Feast of the Immaculate Conception, I have compiled some quotations, which tell us precisely why we will not see many liberals and Modernists celebrating with any amount of enthusiasm today. For, as these quotes explain, this Dogma implicitly destroys the foundations on which their ideology rests. In addition to being a jewel in the crown of Our Lady, this dogma, above all other Marian dogmas, is one of the primary instruments she uses to crush the head of the serpent…Chris Jackson

From AD DIEM ILLUM LAETISSIMUM (On the Immaculate Conception)

Encyclical promulgated on 2 February 1904
…22. But lest it be thought that We have lost sight of Our subject, which is the Immaculate Conception, what great and effectual succor will be found in it for the preservation and right development of those same virtues.

What truly is the point of departure of the enemies of religion for the sowing of the great and serious errors by which the faith of so many is shaken? They begin by denying that man has fallen by sin and been cast down from his former position. Hence they regard as mere fables original sin and the evils that were its consequence. Humanity vitiated in its source vitiated in its turn the whole race of man; and thus was evil introduced amongst men and the necessity for a Redeemer involved. All this rejected it is easy to understand that no place is left for Christ, for the Church, for grace or for anything that is above and beyond nature; in one word the whole edifice of faith is shaken from top to bottom. But let people believe and confess that the Virgin Mary has been from the first moment of her conception preserved from all stain; and it is straightway necessary that they should admit both original sin and the rehabilitation of the human race by Jesus Christ, the Gospel, and the Church and the law of suffering. By virtue of this Rationalism and Materialism is torn up by the roots and destroyed, and there remains to Christian wisdom the glory of having to guard and protect the truth. It is moreover a vice common to the enemies of the faith of our time especially that they repudiate and proclaim the necessity of repudiating all respect and obedience for the authority of the Church, and even of any human power, in the idea that it will thus be more easy to make an end of faith. Here we have the origin of Anarchism, than which nothing is more pernicious and pestilent to the order of things whether natural or supernatural. Now this plague, which is equally fatal to society at large and to Christianity, finds its ruin in the dogma of the Immaculate Conception by the obligation which it imposes of recognizing in the Church a power before which not only has the will to bow, but the intelligence to subject itself. It is from a subjection of the reason of this sort that Christian people sing thus the praise of the Mother of God: "Thou art all fair, O Mary, and the stain of original sin is not in thee." (Mass of Immac. Concep.) And thus once again is justified what the Church attributes to this august Virgin that she has exterminated all heresies in the world.

…And   if   we study   the   nature   of   the doctrine defined, we shall   see abundant   reason   for heart­ felt gratitude. Modern civilization is based   upon naturalism, and naturalism derides the idea of the fall of man. Original sin is a doctrine utterly in­ consistent with the fundamental   principles   of   a system which emancipates the flesh, glorifies nature, and proclaims the   sovereignty   of   human   reason. The doctrine   of   the   Immaculate   Conception, and its declaration as an article of faith are an affirmation of the fall of man and of original sin, as decided and categorical as they are of the fact that one pure creature   was supernaturally exempt   from all such taint of corruption. By insisting on the sole exception and its causes, the Church only inculcates the general rule with the greater force. And by thus fixing the minds of her children upon the   truth which is most diametrically antagonistic to the fundamental heresy of modern times, she furnishes them with an antidote   to its insidious poison, and cuts away from them the errors which lie at the root of the fascinating theories so sedulously maintained by the revived paganism of the age.

From The Definition of the Immaculate Conception, found in the book “Our Faith and Belief” (Murphy & McCarthy 1917):

…But if the Incarnation is thus continually honored by the Church, it is not less true that it is the object of the incessant attacks of heresy (insidious or open); and from Arius to Luther, as predicted by St. John, the mark of Antichrist has been the denying or impairing of the doctrine that God "come in the flesh," and taken our nature upon him, of the substance of the Blessed Virgin. In the Church there is not a doctrine, a discipline, or a practice, which has not for its end and object, direct or indirect, the preservation or application of the wondrous fact which we commemorate at Christmas - God­ man.
But all forms of error, from that of the Galatians to those of Luther, Calvin, and Cranmer, and all other subsequent sects to which these have given birth,-all attempts of the secular power against the Church, from the Roman emperors to Elizabeth and Victoria, are only devices of the serpent to reverse the prophecy, that in this mystery "the Woman" should "crush his head." In England it has only just been made lawful for the Clergy to administer even the Sacraments of the Church, and thus apply to individuals the benefits of the Incarnation; and we know that in the lifetime of some of us a Catholic Bishop has been prosecuted for saying Mass and giving Confirmation.

Protestantism is the last, the subtlest, and perhaps the most pernicious form of error that has appeared; and the doctrines of the Anglo-Irish Establishment are all the more pernicious, in consequence of the disguise which it has assumed; for, having borrowed certain forms and ceremonies, words and formulas, from the Church, it is capable of much greater success in its deception than other forms of Protestantism. "It has been for her," states a recent writer ''to pretend to an Apostolical succession of Bishops", to steal large fragments of old Catholic prayers, to chant old Catholic hymns, to repeat old Catholic creeds and to ape the very exclusiveness of the Church. She commands the proudest of all races to admit with one breath the Athanasian Creed and the Royal Supremacy, and bribes her victims to assent with a revenue of £3,000,000 sterling."

But the nominal retention of the creeds of Athanasius and Nicaea has not secured the acceptance of the doctrine of the Incarnation by her members, who are for the most part simply ignorant of the belief that the Divine and human natures are indissolubly united in one Person; and that of this Divine Person the Blessed Virgin is the real and true Mother. It was this mystery which was the cause of the fall of Lucifer; and it will ever be the great object of his attacks. Arius openly denied the Divinity of Our Lord; Protestantism, subtle and cunning, concealing its end and object, and pretending zeal for the honor of Our Lord, has attacked the Incarnation more insidiously and effectually by reducing his Blessed Mother to the level of a "mere (ordinary) woman" (as some of its writers do not hesitate to call her), and denying all those doctrines and rites which were the result or growth of this mystery.

But at Trent as at Nicaea, and now at Rome, the Catholic has defended by her definitions and her an­ anathemas the true doctrine; and, as at Ephesus, fourteen centuries ago, she condemned the errors of Nestorius, and by proclaiming the Divine Maternity of Mary, effectually guarded the true doctrine of her Son's Incarnation; so now, in this age of unbelief and irreverence, when so many Christians refuse to honor the Mother of God, has she declared that other great mystery -the first in order of time, and the preparation for the former, being required for the honor of Our Lord himself -of her Immaculate Conception. The glories of Mary (to quote the title of one of Dr. Newman's discourses) are "for the lake of her Son," and they are never entirely separated in the commemoration of the Church…

As Dr. Faber observes in one of his recent sermon the honor or dishonor of Mother and Son invariably go together; and we know from the history of the Reformation in this and other countries, that the destruction of the images and altars of Mary quickly followed profanation of the Blessed Sacrament ; while, on the other hand, those who cherish devotion to Our Lord in the Holy Eucharist are also devout in proportion to his Blessed Mother. And when he is exposed on the altar to the adoration of the Faithful, it is his Holy Mother whom we invite to present our prayers to him, addressing her by all the titles with which the Church has taught us to invoke her assistance, concluding with of her Immaculate Conception.

[Comment Guidelines - Click to view]
The Remnant values the comments and input of our visitors. It’s no secret, however, that trolls exist, and trolls can do a lot of damage to a brand. Therefore, our comments are heavily monitored 24/7 by Remnant moderators around the country.  They have been instructed to remove demeaning, hostile, needlessly combative, racist, Christophobic comments, and streams not related to the storyline. Multiple comments from one person under a story are also discouraged. Capitalized sentences or comments will be removed (Internet shouting).
The Remnant comments sections are not designed for frequent personal blogging, on-going debates or theological or other disputes between commenters. Please understand that we pay our writers to defend The Remnant’s editorial positions. We thus acknowledge no moral obligation whatsoever to allow anyone and everyone to try to undermine our editorial policy and create a general nuisance on our website.  Therefore, Remnant moderators reserve the right to edit or remove comments, and comments do not necessarily represent the views of The Remnant.
back to top
Last modified on Thursday, December 8, 2016
Tweet

More in this category: « Can the Church Judge a Heretical Pope? Francis's Scatological Christmas »