Voice of the Family statement on the encyclical Laudato Si 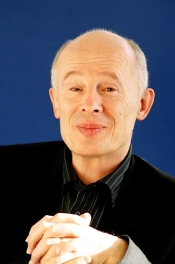 Prof: H. Schellnhuber, advocate of a supreme global government, population control extremist, and now appointed by Francis as a member of the Pontifical Academy of Sciences
Our friends at Voice of the Family released a powerful statement on the Pope's new encyclical.  Here is an excerpt: "ROME, 18th June 2015: ​ The international coalition Voice of the Family is deeply concerned by the omission from the encyclical letter Laudato Si of a reaffirmation of the Church’s teaching against contraception and on procreation as the primary end of the sexual act.

"The encyclical, published this morning, contains the welcome assertions that “concern for the protection of nature is also incompatible with the justification of abortion” (No. 120) and “that demographic growth is fully compatible with an integral and shared development” (No. 50).

"However the omission of any reference to Church teaching on the use of contraception leaves Catholics ill-prepared to resist the international population control agenda.


“God commanded man to ‘increase and multiply, and fill the earth’ (Gen 1:28)” said Voice of the Family manager Maria Madise “but the environmental movement commonly regards population growth as a threat”. Madise continued: “Developing nations are being flooded with contraceptives and subjected to pressure to legalise abortion. Given that contraception and environmentalism so often go hand-in-hand it is deeply troubling that Church teaching on the primacy of procreation is not reaffirmed.”

"Patrick Buckley, UN lobbyist for the Society for the Protection of Unborn Children (SPUC), noted that “The encyclical calls for increased international environmental action in paragraphs 173-175, while neglecting to prepare Catholics for what such action will undoubtedly involve: renewed attempts to further impose contraception and abortion on the developing world.”

"Professor Hans Schellnhuber was among those chosen by the Holy See to present the encyclical to the press this morning. Schellnhuber has previously stated that the “carrying capacity of the planet” is “below 1 billion people”. The global population would have to be reduced by more than 80% to meet this target.

"John-Henry Westen, co-founder of Voice of the Family and editor-in-chief of LifeSiteNews commented “Professor Schellnhuber is an advocate of the establishment of a supreme global government that would have the power to take action to resolve the perceived environmental crisis, which in his view requires population reduction. In this context the references in the encyclical to the need for a ‘world political authority’, which should have the power to ‘sanction’, is deeply troubling.”

"Yesterday it was revealed that Professor Schellnhuber has been appointed a member of the Pontifical Academy of Sciences (PAS) by Pope Francis." READ MORE HERE


REMNANT COMMENT: Let’s cut to the chase: Those Catholics who are defending this encyclical are at least inadvertently endorsing the United Nations’ diabolic population control agenda, and, whether they realize it or not, they are making common cause with advocates of the international revolution against God and family.  The encyclical's perfunctory and weak-kneed pro-life nod changes nothing.

I have no idea how complicit Pope Francis is with all this. I don’t claim to know the extent of his knowledge of what’s really going on here. But you and I as faithful Catholics and defenders of life, the family and the rights of God must stand and object. If that makes us unpopular with men, so be it. It will keep us in the favor of our merciful God.

Sister Lucia of Fatima told the world what to do when this day comes: "Recite the Rosary every day. Our Lady repeated this in all Her apparitions, as if to arm us in advance against these times of diabolical disorientation, so that we would not let ourselves be fooled by false doctrines, and that through prayers, the elevation of our soul to God would not be diminished."

Darkness and diabolical disorientation have fallen over the whole earth. . . don’t be deceived by that which is contrary to God’s word—even if it is spoken by an angel of light…or a pope.

And pray for Pope Francis. Pray for him every day. Pray for him as though your life and the lives of your children depend on your prayers. For, indeed, they just might.

[Comment Guidelines - Click to view]
The Remnant values the comments and input of our visitors. It’s no secret, however, that trolls exist, and trolls can do a lot of damage to a brand. Therefore, our comments are heavily monitored 24/7 by Remnant moderators around the country.  They have been instructed to remove demeaning, hostile, needlessly combative, racist, Christophobic comments, and streams not related to the storyline. Multiple comments from one person under a story are also discouraged. Capitalized sentences or comments will be removed (Internet shouting).
The Remnant comments sections are not designed for frequent personal blogging, on-going debates or theological or other disputes between commenters. Please understand that we pay our writers to defend The Remnant’s editorial positions. We thus acknowledge no moral obligation whatsoever to allow anyone and everyone to try to undermine our editorial policy and create a general nuisance on our website.  Therefore, Remnant moderators reserve the right to edit or remove comments, and comments do not necessarily represent the views of The Remnant.
back to top
Last modified on Saturday, June 20, 2015
Tweet

More in this category: « Why I’m Disregarding Laudato Si and You Should Too The Pope's Encyclical: A Statement from Elizabeth Yore, International Child Rights Attorney »