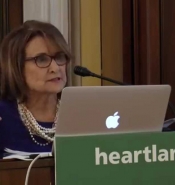 Remnant Columnist, Elizabeth Yore
As a member of the Heartland Institute delegation that travelled to Rome to urge the Vatican to reconsider its embrace and adoption of the United Nations’ Sustainable Development radical agenda, Pope Francis’ Laudato Si Encyclical validates my greatest fears.

Throughout the last two years, in preparation for the encyclical rollout, the Vatican has relied solely upon global warming alarmists in its rush to judgment to meet the UN 2015 Sustainable Development Goals’ timetable.   Additionally, during this process, the Vatican consulted primarily with and continues to rely upon radical population control proponents who exploit discredited climate change science to justify their extremist population reduction policies under the nuanced UN ‘reproductive sexual health’ rubric.


Instead of welcoming our heartfelt disapproval of papal experts who promote policies in direct contravention of Catholic moral teaching, the Vatican authorities mocked and scoffed at our serious and faithful objections, by calling us ‘Tea Partiers’ and ‘deniers’. This callous and flippant response exposed the Vatican’s political agenda.

The release of the Laudato Si provides the long awaited moral authority for an immoral and radical UN environmental strategy to reduce the global population through the articulated Sustainable Development tactics of abortion, sterilization and other reproductive sexual health services. Ironically, the Vatican has repeatedly expressed hope that the encyclical will be used to promote the UN Sustainable Development Goals in September and the Paris Climate Treaty in November.

In January, 2015, the Administrator of the U.S. Environmental Protection Agency met with high level Vatican officials to coordinate this encyclical with the Obama Administration’s environmental regulations and policies. From the beginning stages of this unholy alliance, the Vatican, the Obama Administration and the United Nations have closely coordinated with their biased experts, their alarmist message, and their radical policies to manufacture a climate crisis in order to promote a new radical world order.

The greatest danger to the global environment and survival of mankind is the continued promulgation of worldwide abortion. As we repeatedly warned the Vatican, the Pope’s encyclical will be used by the United Nations to continue its global domination of abortion as the means to control the world’s population using the false science of global warming and its accompanying alarmist tactics to intimidate, coerce, and entice developing countries to employ policies that reduce fertility of its poor people and abort its children. Notwithstanding standard pro life language in the document, this encyclical will be cited as the moral platform for the UN radical population control movement embedded in the Sustainable Development Goals.

This is the new global religion of environmentalism being promoted by the Catholic Church.

For Further Discussion: EWTN's The World Over...

[Comment Guidelines - Click to view]
The Remnant values the comments and input of our visitors. It’s no secret, however, that trolls exist, and trolls can do a lot of damage to a brand. Therefore, our comments are heavily monitored 24/7 by Remnant moderators around the country.  They have been instructed to remove demeaning, hostile, needlessly combative, racist, Christophobic comments, and streams not related to the storyline. Multiple comments from one person under a story are also discouraged. Capitalized sentences or comments will be removed (Internet shouting).
The Remnant comments sections are not designed for frequent personal blogging, on-going debates or theological or other disputes between commenters. Please understand that we pay our writers to defend The Remnant’s editorial positions. We thus acknowledge no moral obligation whatsoever to allow anyone and everyone to try to undermine our editorial policy and create a general nuisance on our website.  Therefore, Remnant moderators reserve the right to edit or remove comments, and comments do not necessarily represent the views of The Remnant.
back to top
Last modified on Monday, June 22, 2015
Tweet

More in this category: « Voice of the Family statement on the encyclical Laudato Si Like Harry Always Says: “But there are good things in Pope Francis’ encyclical…” »