Francis to Beatify 'Jimmy Carter of Popes' at Close of Synod? 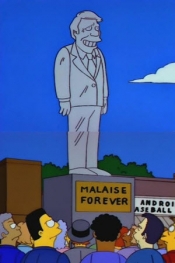 It seems that in order to survive as a Catholic in the post-Conciliar era of devastation, a sense of humor is a necessity. If this is the case then it has never been more necessary than right now. A Vatican statement now tells us that Pope Francis is set to beatify Pope Paul VI at end of synod on the family on October 19th. This is, no doubt, the first step in Paul VI’s fast tracked sainthood.

Therefore Pope Francis must be of the opinion that Paul VI is deserving of being held up as a great papal example worthy of emulation. So what exactly did Paul VI do to deserve such an honor? Well, after inheriting a thriving Church from his predecessors, I will let Paul VI himself describe his performance:

The Church finds herself in an hour of anxiety, a disturbed period of self-criticism, or what would even better be called self-demolition [auto-destruction]. It is an interior upheaval, acute and complicated, which nobody expected after the Council. It is almost as if the Church were attacking itself. We looked forward to a flowering, a serene expansion of conceptions, which matured in the great sessions of the council. But ... one must notice above all the sorrowful aspect. It is as if the Church were destroying herself.[i]

We have the impression that through some cracks in the wall the smoke of Satan has entered the temple of God: it is doubt, uncertainty, questioning, dissatisfaction, confrontation.... We thought that after the Council a day of sunshine would have dawned for the history of the Church. What dawned, instead, was a day of clouds and storms, of darkness, of searching and uncertainties.[ii]

Ironically, Paul VI himself recognized that the Church was falling apart under his watch. Thus, it seems clear that even Paul VI would not beatify Paul VI…and for good reason. The statistics bear out Paul VI’s argument against his own beatification. Consider the following trends in statistics in the US alone from 1965 to 1980:[iii]

What makes this even more depressing is that all of the previous totals should have been rising just to keep up with population growth. During this same period, the total number of self-identified Catholics increased by 8.3 million people!

Judging by these statistics and Paul VI’s own assessment, his pontificate was a complete disaster. Yet he is apparently going to be raised to the altars soon as a Saint worthy of emulation. Would this type of decision pass muster in any other organization? By this logic, the United States should induct Jimmy Carter into the Presidential Hall of Fame.

[i] Pope Paul VI, December 7, 1968, Address to the Lombard Seminary at Rome
[ii] Pope Paul VI, June 29, 1972, Homily during the Mass for Sts. Peter & Paul, on the occasion of the ninth anniversary of his coronation in his response to Vatican II
[iii] http://cara.georgetown.edu/caraservices/requestedchurchstats.html
Published in Fetzen Fliegen
back to top
Last modified on Wednesday, September 10, 2014
Tweet

More in this category: « Imagine That! Blending Pop Culture with Pope Culture The Latest Pope Francis Blooper: The Catholic Faithful Are No Better than Criminals in Prison »