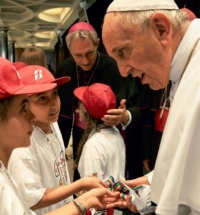 There he is, amidst the provocative poses of supermodels Gisele Bündchen and Gigi Hadid, between the latest fashion trends of Versace and Chanel, nestled among Saint Laurent and Prada.

The Vicar of Vogue.

In the midst of the Vatican’s greatest global child sex abuse scandal, the Vatican communication flunkies coordinate with the Leftists at Vogue Magazine, to hail the conquering hero, Pope Francis, as the champion of children!

The August Vogue issue is perfectly timed to land on the magazine stands right when the American Catholic Church is reeling from the decades long sex abuse revelations of prominent and powerful Cardinal Ted McCarrick. Is the Vatican tone deaf or simply arrogantly dismissive of the pain and shock exploding among the Catholic laity and the victims? 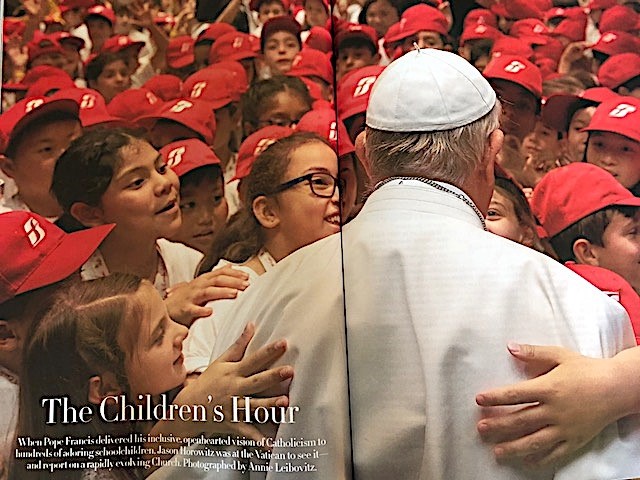 The personality cult of Francis the Merciful continues to dominate the left in hopes that it will surely override any of the multitude of Vatican scandals involving unrelenting clerical sexual abuse and theological abuses. As the voice of the fashionable left, Vogue ramps up the endless Francis fawning of the media global elites.

Are you sitting down? The title of the gushing hagiographic human interest story is, The Children’s Hour. Vogue editors even contracted with the famous and very pricey photographer of the stars, Annie Leibowitz to snap a few cute candids of the pontiff surrounded by, you guessed it, lots of little children. How cool of the merciful Pontiff to share his papal stage and precious time with the globalist gal pal, Leibowitz for a slick press photo op. The marketing of Francis, Inc. to the global elites demands only the best of photographers. After all, Leibowitz photographs all Bergoglio’s buddies, like George Clooney, Angelina Jolie, Leo “Global Warming” DiCaprio.

Nothing like a splashing centerfold article with Francis and the kiddies to distract the public from the Vatican’s exploding cover up clerical sex scandals dominating the headlines. How endearing are these snapshots of little children enveloping the Pontiff in a love scrum. No doubt about it. Francis is the children’s Pope.

The author, Jason Horowitz, wastes no time highlighting the special relationship between Francis and the children:

“{W}hen the kids ask him questions, Francis brightens dramatically. He suddenly radiates ebullience and avuncular warmth. As a journalist who has covered Francis for years, I’ve seen this shift before—when he’s broken from sermons to share homespun wisdom or embraced a Muslim asylum seeker in a refugee camp….I knew I was in the presence of a natural.”

Oh, he’s a natural, all right. Francis masterfully plays to the cameras and the global elite mouthing support for their favorite causes of climate change, mass migration, anti-death penalty, and LGBT advocacy. Horowitz is dazzled by Francis’ “visceral humanity.” Apparently, these naive and unsophisticated elites are swayed by the staged humility of a Fiat car, a simple apartment, washing Muslim feet, all carefully orchestrated and announced for public consumption by the Vatican press office. Francis even jokes with the kids!

The mainstream media laps up the carefully choreographed Vatican productions starring the Humble One, since he deftly promotes their leftist causes. Still awestruck with the papal photo ops, with kissing babies, chatting up with children, and blessing sick infants, as if they have never seen a Pope before. The Francis Papalotry is derived from the knowledge that he is one of them.

There is nothing more dangerous than a demagogue, especially one that exploits children for his own personal power and benefit. Be assured, that this glowing Vogue feature story with very expensive photos of children was masterfully concocted and collaborated with the Vatican press office. Yes, Greg Burke and Spadaro can sip vino with Annie after the shoot, but remain conspicuously silent over the clerical sex abuse scandals involving thousands of children.

The Vogue article ends with a final, warm and fuzzy scene from the Vatican:

“And now, here he (Francis) is at the Vatican, surrounded by kids with red hats on their heads, many carrying balloons.”

Oh, yes, those red hats. When he looks out at the children in red hats, does Francis think of all the cardinals in their red hats who abused children and covered up the clerical sex abuse?

Because the Children’s Hour has arrived and is long overdue.

And this time it won’t land Francis in the pages of Vogue.

[Comment Guidelines - Click to view]
The Remnant values the comments and input of our visitors. It’s no secret, however, that trolls exist, and trolls can do a lot of damage to a brand. Therefore, our comments are heavily monitored 24/7 by Remnant moderators around the country.  They have been instructed to remove demeaning, hostile, needlessly combative, racist, Christophobic comments, and streams not related to the storyline. Multiple comments from one person under a story are also discouraged. Capitalized sentences or comments will be removed (Internet shouting).
The Remnant comments sections are not designed for frequent personal blogging, on-going debates or theological or other disputes between commenters. Please understand that we pay our writers to defend The Remnant’s editorial positions. We thus acknowledge no moral obligation whatsoever to allow anyone and everyone to try to undermine our editorial policy and create a general nuisance on our website.  Therefore, Remnant moderators reserve the right to edit or remove comments, and comments do not necessarily represent the views of The Remnant.
back to top
Last modified on Tuesday, August 7, 2018
Tweet