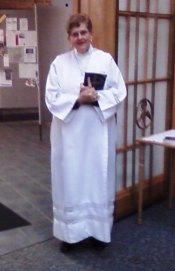 No, this headline is not from the Remnant’s satire site, Allium Cepa. Unfortunately it is all too real. As the Democrat & Chronicle newspaper reported on July 19th:

For the better part of 40 years in churches across the Roman Catholic Diocese of Rochester, clergy ceded the floor to laypeople for the delivery of the homily — the sermon that follows the reading of the Gospel at Mass.

Thus for FORTY YEARS an entire diocese of Catholics have been subjected to illicit lay preaching at Sunday Masses they are required under pain of mortal sin to attend. I have a question. Where have the Neo-Catholic apologists been for the last forty years regarding this situation? Aren’t these the same people we hear thumping their canon law books, waving them in the air, as they lecture Catholics about such canonical terms as “faculties”, “jurisdiction”, etc. when it comes to SSPX marriages and confessions?

Yet here is an entire diocese that absolutely flouted and disregarded the same canon law, with the apparent complicity of its former Bishop Matthew Clark, for four decades, and apparently little to no peep or organized action from the apologists was to be found.

Thus, it is becoming apparent that canon law is only considered important and to be enforced if one happens to be of the traditional persuasion. However, if you are a liberal innovator with the backing of your local bishop, all bets are off. Especially since, as we have seen for the past two years, the Pope can defy canon law at will with regard to Holy Thursday regulations. Thus, how can Pope Francis now, with any credibility, force a bishop to obey canon law when he himself does not? And if the Pope will not force liberal bishops to obey canon law (which practically no pope has done since 1958) of what use is it, except as a pretext for selectively disciplining traditional priests?

Thankfully, Rochester’s current bishop, Bishop Salvatore Matano is putting an end to “lay homilists.”. But in doing so, Bishop Matano seems to cite obedience to the law as the primary reason:

But what good does it do to cite the “universal law of the church” when, as we know from the Communion in the Hand and Altar Girl experiences, “universal” liturgical laws are seen to the left as mere challenges to get those laws changed. For if the only rationale against lay homilies is a rule in a rulebook, then why not just change the rule and then get Neo-Catholic apologists to defend the rule as the new “Church Law?” Such is the legal positivist air that most Catholics have been inhaling since the Council.

But where did all of these canon laws come from? If we listen long enough to our Neo-Catholic apologist friends, we start to believe that they are a set of rules arbitrarily decided upon in the past and recorded in a book which could change at any time. In addition, they tell us that the Pope can violate any and all of the rules in the book with impunity. But is this all canon law is?

Far from it. Canon law was not organized and written into a Code until the time of Pius X. Before that, canon law consisted of the collective wisdom of the Church as regards its governance which had been worked out for the previous 2,000 years. The laws which had developed were treated with respect as they had been formed for centuries based on the customs, traditions, and experiences of the Church.

Though codifying these laws into one book in a systematic fashion aided efficiency and clarity, it also risked the psychological severing of these laws from their historical and traditional history and context. For where priests in St. Pius X’s day understood the historical context and roots of the laws they studied, future priests would simply have to be familiar only with the rules themselves in the new book. Fast forward to today, and we can see that these rules, many of which were arrived upon through centuries of wisdom and practice, are treated as nothing more than arbitrary do’s and don’ts that can be changed or disregarded at the fiat of the Pope.

Nevertheless, in the case of the “lay homilists” Bishop Matano tries to attribute their actions not to disobedience, but rather to a mere “misinterpretation”:

Matano called the ubiquity of the practice "a bit perplexing" and attributed it to a misinterpretation of canon law.

"In the life of the church today, there are many interpretations that people might give to a particular ruling with no malintent present, but that do need clarification," Matano said.

The canon is question reads as follows:

Canon 767§1 :  Among the forms of preaching, the homily, which is part of the liturgy itself and is reserved to a priest or deacon, is preeminent; in the homily the mysteries of faith and the norms of Christian life are to be explained from the sacred text during the course of the liturgical year.

Further, paragraph 66 of the General Instruction of the Roman Missal (GIRM) states in relevant part:

66. The Homily should ordinarily be given by the priest celebrant himself. He may entrust it to a concelebrating priest or occasionally, according to circumstances, to the deacon, but never to a lay person…

Thus, can anyone explain to me how a canon stating that the homily is “reserved to priest or deacon,” especially in light of the words right in the GIRM, can possibly be interpreted to mean laypersons can give homilies? It can’t. Thus, with all due respect to Bishop Morlino, the ubiquity of the practice is not perplexing at all, malintent to violate the law was present, and the canon, at no time, needed clarification.

The Remnant Needs Your Help!

Click here to find out how you can become a subscriber to The Remnant--America's oldest traditional Catholic newspaper. By subscribing, you also help ensure that content on this website will continue to be provided for free.

To donate to The Remnant's tax-exempt foundation, please click here. The Remnant is on the frontline every day fighting against the Christophobes, but we can't do it without you!  Please help us maintain the Catholic counterrevolution.

"It's a 40-year-old custom that's been part of the tradition of our local church, and people are saddened, people are frustrated and people are asking, 'Why can't you do this?' " DeRycke said. "They're not satisfied with saying, 'Because it's the law.' "

The first part of DeRycke’s statement is humorous. One wonders whether she sees the irony. How can one who helped upend 2,000 years of priest-given sermons now appeal to a 40 year disobedient custom in her diocese as an unchangeable law that must be respected? Indeed those that live by novelty are destined to die by novelty.

The second part of DeRycke’s statement, however, is true. This goes to my earlier point. A Church which has allowed liturgical law to change with impunity over the last 40 years, and that has refused to discipline an entire diocese for creating its own illicit law for decades can hardly expect members of this diocese to be satisfied with a “because it’s the law” answer. As they have seen, “the law” is changing, selectively enforced by bishops, and ignored by the Pope himself.

The real answer for Ms. DeRycke involves making a distinction between the ordained priesthood and the layman. Unfortunately this is a subject which is taboo in our current “priesthood of all believers” and anti-clericalist time. Nevertheless, to what authority does Ms. DeRycke or any other layperson cite giving them the mission to authoritatively preach the application of Holy Scripture to the lives of the faithful in the name of the Church? The sermon was made for the priest as it is part of his mission and leadership role over his flock. The word “sermon” more effectively captured this thought.

Since the advent of the “homily” after Vatican II, however, the “sermon” has often been replaced by a sort of reflection, meditation, or discussion on the readings with no authoritative moral preaching or direction involved. Thus, is it any wonder why people like Ms. DeRycke have imbibed the message from the Conciliar Church that anyone can give a homily?

Then again, “Ms. DeRycke” is not exactly your ordinary layman. Although the news report gives only her first and last name, it turns out that “Nancy DeRycke” is really Sister Nancy DeRycke, SSJ. Not only that, she was quoted in a 1995 article for Human Life International covering a Woman’s Ordination Conference (WOC) as follows:

If WOC is thinking about giving up the agenda of renewing the church, where does

that leave everybody who has been trying so hard?" wailed Sister Nancy DeRycke,

another Rochester SSJ. "For 20 years we've been saying 'It's our church!' We can't just

drop it and start something else from scratch! Schism isn't the only way! Ordination

doesn't have to mean subordination.

For more detailed information regarding “lay homilists” in the Diocese of Rochester, please check out the website Cleansing Fire. It has been documenting the liturgical abuses in this diocese for years.

Published in Fetzen Fliegen
back to top
Last modified on Tuesday, July 22, 2014
Tweet
More in this category: « The New Evangelization: Salvation Without Conversion? Men of Iron: Another Portrait of the Preconciliar Catholic Priest »