The New Evangelization: Salvation Without Conversion? 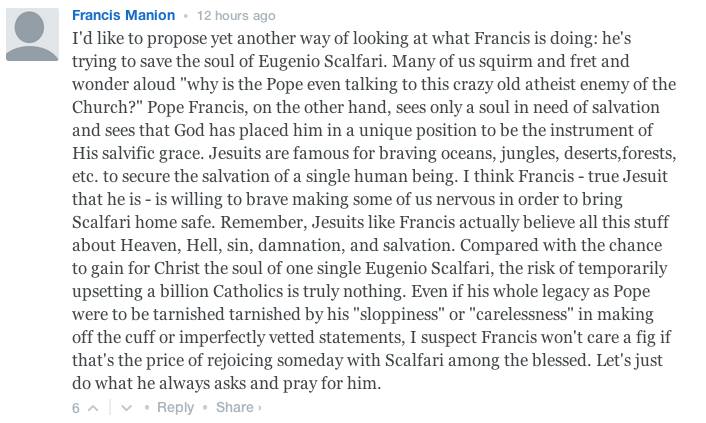 Interesting perspective. However, in order to be true, Pope Francis will somehow have to save Scalfari’s soul without his converting to Catholicism. For as Scalfari himself wrote in his first interview of Pope Francis:

Scalfari: Your Holiness, you said that you have no intention of trying to convert me and I do not think you would succeed.

Pope Francis: "We cannot know that, but I don't have any such intention."

Earlier in the interview the Pope had elaborated on this point:

Scalfari: The Pope comes in and shakes my hand, and we sit down. The Pope smiles and says: "Some of my colleagues who know you told me that you will try to convert me." It's a joke, I tell him. My friends think it is you want to convert me.

He smiles again and replies: "Proselytism is solemn nonsense, it makes no sense. We need to get to know each other, listen to each other and improve our knowledge of the world around us. Sometimes after a meeting I want to arrange another one because new ideas are born and I discover new needs. This is important: to get to know people, listen, expand the circle of ideas. The world is crisscrossed by roads that come closer together and move apart, but the important thing is that they lead towards the Good."

Further, Pope Francis has recently stated he has no intention of converting evangelicals either. In a July 9th story on his meeting with Pope Francis, Brian C Stiller, Global Ambassador for the World Evangelical Alliance writes:

At lunch I asked Pope Francis what his heart was for evangelism. He smiled, knowing what was behind my question and comment was, “I’m not interested in converting Evangelicals to Catholicism. I want people to find Jesus in their own community.  There are so many doctrines we will never agree on. Let’s be about showing the love of Jesus.”

Thus, it seems Shea and others would try to force an intention upon Pope Francis which he has explicitly stated he does not have. That is, of course, if one equates helping to save another’s soul with attempting to bring about his conversion to Catholicism. For if one can certainly save one’s soul without converting to Catholicism, then why try to convert anyone? Further, what exactly would the atheist that Shea, Manion, or Pope Francis is dialoguing with have to do in order to demonstrate that his soul was being saved other than converting and being baptized?

In any case, how far this thinking is from the Catholic approach to helping save souls. To demonstrate the contrast, here is a quote from Dr. Alice Von Hildebrand in an interview with Latin Mass Magazine from 2001. It is in regard to her late husband, Dr. Dietrich Von Hildebrand; a man Pius XII called “The 20th Century Doctor of the Church”:

TLM: I take it by your remarks about ecumenism that you don’t agree with the current policy of “convergence” rather than “conversion”?

AVH: Let me relate an incident that caused my husband grief. It was 1946, just after the war. My husband was teaching at Fordham, and there appeared in one of his classes a Jewish student who had been a naval officer during the war. He would eventually tell my husband about a particularly stunning sunset in the Pacific and how it had led him to the quest for the truth about God. He first went to Columbia to study philosophy, and he knew that this was not what he was looking for. A friend suggested he try philosophy at Fordham and mentioned the name Dietrich von Hildebrand. After just one class with my husband, he knew he had found what he was looking for. One day after class my husband and this student went for a walk. He told my husband during this time that he was surprised at the fact that several professors, after discovering he was Jewish, assured him that they would not try to convert him to Catholicism. My husband, stunned, stopped, turned to him and said, “They said what?!” He repeated the story and my husband told him, “I would walk to the ends of the earth to make you a Catholic.” To make a long story short, the young man became a Catholic, was ordained a Carthusian priest, and went on to enter the only Charter House in the United States (in Vermont)!

Published in Fetzen Fliegen
back to top
Last modified on Monday, July 21, 2014
Tweet