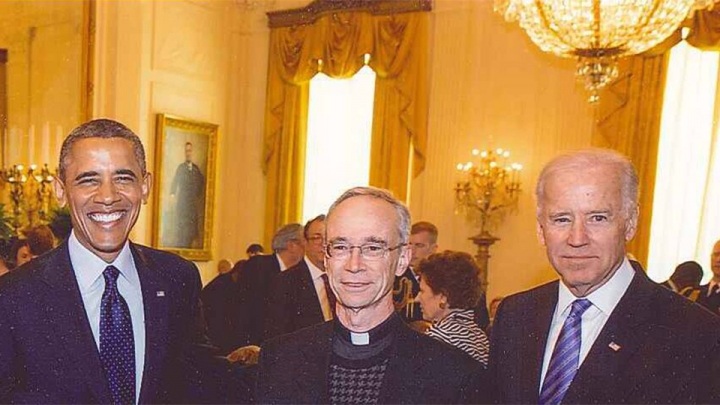 Fr. Thomas Reese with two of his buds.

I pray this letter finds you well and in good health. First, I want you to know that I am writing to inform you that your statement about children and youth not being allowed to attend the Latin Mass is wrong. I cannot be silent on this subject, because it is one too close to my heart and too important to be dismissed as "just another Jesuit speaking badly about the Latin Mass.”

I, myself, am a young person that appreciates the Latin Mass and the rich connection that it provides to my Catholic Faith. I attended the Novus Ordo as a child and never had a connection to the Mass; it was a drudge and, truth be told, I didn’t want to attend. It was lifeless and it held no beauty or clarity for me.

Then my family and I discovered the Latin Mass. That’s really all I need to say, but I think I need to clarify what I mean. The first Latin Mass I attended absolutely held me riveted. I couldn’t take my eyes off of what the priest was doing. The fact that I was able to be present at this Great Sacrifice was amazing to me.

As I grew older, I began to read why the Latin Mass was celebrated the way it is. The mystery and truths revealed in the Mass gave me a richer and deeper appreciation for what Holy Mother Church taught--something never happened to me while attending the Mass brought about by Vatican II.

There is no need to have a new liturgical revolution. The only revolution that needs to happen is that against speaking ambiguity rather than truth. The experiment of modernism is coming to an end. Faithful Catholics are breaking out of the confined petri dish of Vatican II.  Young people are flocking back to the Latin Mass. They do not want what the 1960s hippies have to offer. They want the Mass of the Saints.

It is not for us to be concerned about the liturgy of the Latin Mass being “boring” or “out of touch with local culture”, but whether or not Catholics are willing to place the bar of virtue high enough to be heirs of Heaven rather than sons of the earth.

I see youth and young adults around my age having such a zeal for the Latin Mass that after experiencing it, they ask all sorts of questions about how they can learn more about the fullness of the Catholic Faith.

This is the Mass that inspired martyrs, monks, religious, and the great Doctors of the Church. Why do you want youth and children to be robbed of such awe, wonder, understanding, and liturgical beauty?

What truth does the Latin Mass hold that makes you afraid of it? Do you fear that children and youth will finally discovering what the Catholic Faith is really about?

What satisfaction could it possibly give you to see children and youth in the Novus Ordo leave the Catholic Faith? Can you not see that the experiment has failed? Catholics and all men and women on earth want the truth. Deep down, every man, woman, and child--no matter how blinded by the lies and deceit fed to them--know truth when they hear it, whether or not they resist it. “Veritas liberabit vos.” - John 8:32.

I live in 2021 and I have no desire to go back to the social, moral and liturgical revolution of the 1960s. I instead, desire to see the true Faith preached and taught in all nations as Christ Himself commanded, but has been clearly disobeyed by the revolutionary men of your generation.

The only way forward is to restore the Latin Mass--not false ecumenism--to its rightful place as the crown jewel of Holy Mother Church. Ecumenism  has been brought nothing but ruin and death to the mission of the Church. Even Protestants have moved farther away, not closer.

Why did Pope Francis bring the Pachamama and other pagan idols into the Vatican, the place where St. Peter, our first pope, is buried?  Has the human element of the Church today forgotten her lineage and dignity?

They want to change the words of the Our Father. Why? Must everything--even the prayers of our grandmothers--be changed?

We young people of the Catholic Church can not follow you all down this broad road.  Instead, we choose and desire to do what is difficult, to follow the narrow road traced out lovingly for us by Christ and His Church.

Catholics do not need “scholars, poets, musicians, artists and pastors to develop liturgies for their specific cultures,” because the Mass is not about the “community”, but rather the worthy Sacrifice offered to God in union with the sacrifice on Calvary. From each “specific culture” comes a different language. So, naturally, the words of the prayers used in the Novus Ordo will also be different.

For nearly two thousand years, it was so much simpler to just celebrate the Latin Mass all over the world. Or is that to be considered “boring” as it does not incorporate how people feel?

No one can change the definitions of Latin words and, as a result, the doctrines, dogmas, and traditions of the Catholic Church are clear and protected. This is why the revolution had to change the language from Latin to the vernacular, because the liturgy was then more pliable.

“I believe in the One, Holy, Catholic, and Apostolic Church.” Is this not in our own Creed? Why, then, is it not followed? Can the modern world really prevent us from doing so? Or is this simply another excuse to ignore the laws set down by doctrine and tradition? We desire to be one Church, a Church that is universal, and a Church that a person can know, love, and serve no matter what part of the world he or she is in.

People desire to honor something higher than themselves. They desire to worship God, and God has laid out for us how He desires to be adored. Through divine revelation, doctrine, and tradition, He has given us His ultimatum on how He should be worshipped through the words of the great Pope St. Pius V, “Let all everywhere adopt and observe what has been handed down by the Holy Roman Church, the mother and teacher of the other churches [parishes], and let Masses not be sung or read according to any other formula than that of this Missal published by Us.” -Encyclical: Quo Primum, July 14, 1570.

[Comment Guidelines - Click to view]
The Remnant values the comments and input of our visitors. It’s no secret, however, that trolls exist, and trolls can do a lot of damage to a brand. Therefore, our comments are heavily monitored 24/7 by Remnant moderators around the country.  They have been instructed to remove demeaning, hostile, needlessly combative, racist, Christophobic comments, and streams not related to the storyline. Multiple comments from one person under a story are also discouraged. Capitalized sentences or comments will be removed (Internet shouting).
The Remnant comments sections are not designed for frequent personal blogging, on-going debates or theological or other disputes between commenters. Please understand that we pay our writers to defend The Remnant’s editorial positions. We thus acknowledge no moral obligation whatsoever to allow anyone and everyone to try to undermine our editorial policy and create a general nuisance on our website.  Therefore, Remnant moderators reserve the right to edit or remove comments, and comments do not necessarily represent the views of The Remnant.
back to top
Last modified on Thursday, April 29, 2021
Tweet
More in this category: « FRANCIS THE MERCIFUL AND JEFFREY SACHS: Moving the Goalpost in Human Trafficking SATAN IS ON THE MARCH: The Francis Court's “disturbing gallery of horrors” »