FRANCIS THE MERCIFUL AND JEFFREY SACHS: Moving the Goalpost in Human Trafficking 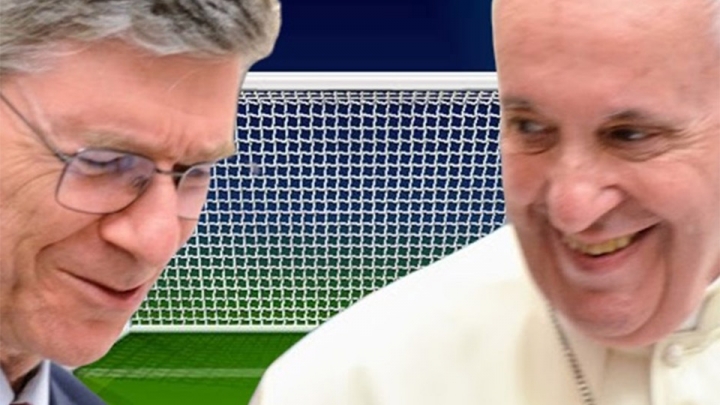 “Humanity’s special place in the cosmos is one of abandoned claims and moving goalposts.”  — FRANZ DE WAAL

Francis the Merciful, along with his UN sidekick,  Jeffrey "The Unsustainable" Sachs, have orchestrated powerful Vatican support for the UN Sustainable Development Goals (SDGs).  Francis endorsed the 17 Commandments, i.e., the UN Sustainable Development Goals years ago, believing they were the gateway to heaven on earth. Included in the sustainable manifesto was goal 8.7, which promised the eradication of global human trafficking.

In the United Nations, promises are made, promises are broken. Goals set, goals moved. The Vatican and the UN were hoping that people wouldn’t pay attention to the goals they set, especially the one involving human trafficking (8.7). After all, no one should be able to hold these men accountable for failing to fulfill their promise.

The Merciful One often chastises the world for its “globalization of indifference.” Catchy phrase, and especially ironic coming from one so indifferent to the suffering victims of clergy sex abuse.

Nevertheless, The Merciful One promised that his pet project of ending human trafficking would meet its goal in 2020. Finally, with the implementation of the UN’s SDGs, the globalization of indifference would end.

2020 is the human trafficking carrot dangling in front of  the UN member states to pressure them to vote for the UN SDGs.

The Vatican’s Pontifical Academy of Social Sciences held 5 conferences on Human Trafficking, bringing experts from around the world. Jeffrey Sachs spoke at many of the events,  curiously posing as an expert on human trafficking.

Because Jeffrey Sachs presents as an uber expert on everything from climate change to economics,  the Vatican invited him to speak at no fewer than 30 of their conferences over the last 8 years. After all, Sachs is the premier advocate for the UN SDGs -- an office which he oversees at the UN.

On December 2, 2014,  Francis personally pontificated on the crisis of human trafficking. Along with interfaith religious leaders, they crafted a joint declaration to eradicate modern slavery by 2020, calling it a crime against humanity.

Francis and his fellow holy ones crated a document declaring that the Vatican established its goalpost of ending human trafficking by 2020 (see below). 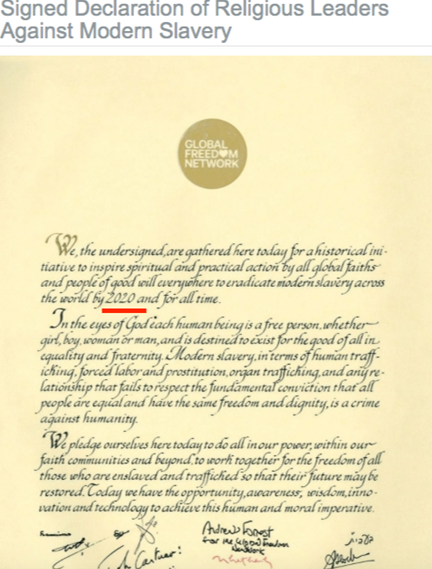 On April 17-21, 2015, in a prominent Vatican speech, Jeffrey Sachs promised his audience that if the UN SDGs were passed by the General Assembly, human trafficking would end in 2020! At this conference, the Vatican and the UN declared and embraced the same human trafficking timeline of 2020!

Imagine, in just 5 years, the world would see the end of the crisis of human trafficking.  It's a miracle!

In his opening sentence, in fact,  Sachs couples the upcoming vote and passage of the Sustainable Development Goals with the elimination of Human Trafficking by 2020 -- human trafficking being the carrot dangling in front of  the UN member states to encourage them to vote for the UN SDGs. Giving the goal a measurable and specific timeline assures an expectation of success, or so it seemed.

as Sachs speaks with confidence and certitude about the goal.

On September 25, 2015,  Pope Francis spoke at the UN General Assembly. Not surprising, he mentioned human trafficking twice in his speech. Coincidentally, on that day, the SDGs passed and adopted by consensus vote of the 193 member states.

At that moment, the clock started ticking toward 2020--the great moment when the world would celebrate the end of human slavery. Right? Isn’t that what Jeff Sachs and Francis the Merciful had promised?

Then on Dec. 13, 2016, Jeffrey Sachs in an interview with Reuters in Rome announced that the world has the chance to eliminate human trafficking in the year of 2025!

2025? What happened to 2020? Welcome to the world of movable goalposts. The world is watching the game as the globalists move the goalposts.

Sachs has been playing the promise game for a long time. William Easterly, a prominent Sachs critic, attacks both Sachs’ promises and solutions over ending global poverty:

“No doubt such promises satisfy the urgent desires of altruistic people in rich countries that something be done to alleviate the grinding misery of the billions who live in poverty around the world. Alas, upon closer inspection, it turns out to be one big Potemkin village. These grandiose but unreal visions sadly crowd out better alternatives to give real help to real poor people.”

“The new proposals to end world poverty are, for one thing, not new. They are recycled ideas from earlier decades that have already failed.”

On April 7, 2016, nearly a year after the passage of the UN SDGs, the Holy See convened a major conference at the United Nations Headquarters in New York.  The theme of the conference was “Ending Human Trafficking by 2030: The Role of Global Partnerships in Eradicating Modern Slavery."

So I guess the Vatican goal of eradicating modern slavery by 2020 didn't pan out then?

Francis the Merciful forgot the wise admonition of Winston Churchill, “The UN was set up not to get us to heaven but only to save us from Hell.”

No word, no announcement, no explanation was given by the Vatican as to the reason why its publicly stated goal had been changed and moved forward another 10 years!

Archbishop Bernardito Auza, the Holy See observer to the UN moderated the Human Trafficking conference and read a special letter from Pope Francis to the attendees of  the event, in which he urged speakers and attendees to focus on the most vulnerable victims of the scourge of modern slavery and human trafficking. He never uttered a word about the aforementioned extension of the 2020 eradication goal to 2030.

Bishop Sanchez Sorondo at the UN

The UN/Vatican conference ended with an intervention from Bishop Marcelo Sanchez Sorondo, Chancellor of the Pontifical Academy of Social Sciences in the Vatican. At Pope Francis’ behest, Sorondo had organized and promoted all the Vatican Human Trafficking Conferences, notably the ones with the stated goal of eradicating human trafficking in 2020. Curiously, Sorondo never mentioned the 10-year postponement of the human trafficking goal.

Surely, Sorondo was acutely aware of the promises publicly made by the Vatican to numerous international experts, judges and victims that human trafficking would end in 2020.

So now that the Human Trafficking goalpost has been quietly moved from 2020 from 2030 without explanation. Is there any realistic expectation that human trafficking will be eradicated by then?

Welcome to the world of the elite globalists at the United Nations. They promise Utopia and never deliver. They promise Nirvana and give us business as usual.

Sachs and the UN are like the barkers at the circus: ‘Step right up and get your ticket to the Greatest Show on Earth.’ One is always left feeling betrayed and befuddled.

There’s only one thing worse than a conniving UN bureaucrat and that's a Pope who plays along with the hoax.

None of this should be a surprise, of course.

Francis is deaf to the cry of the sex abuse victims, although apparently not to the ‘cry of Mother Earth.’

The Merciful One owes his allegiance, not to his flock, but to his global masters. The globalists exploit the poor by saying they want to end poverty, yet end up impoverishing more.

They feign concern for human trafficking, yet advocate for open borders which foster more human slavery. Human trafficking victims, like the poor, serve as convenient prop to promote the agenda of the global new world order.

Apparently, Francis learned nothing about human trafficking from his 5 papal conferences. His ignorance about the protection offered by border walls against human trafficking defies credulity. Recall that Francis called Trump’s border wall “unchristian” and “cruel.” Only a fool or a globalist would promote open borders, since the net result is a huge spike in human trafficking and human misery.

As a result, Francis and his globalist guru, Jeffrey Sachs, won’t be eradicating trafficking in 2030, or any time soon.

Get ready to move that goalpost, again.

Francis the Merciful forgot the wise admonition of Winston Churchill, “The UN was set up not to get us to heaven but only to save us from Hell.”

Elizabeth Yore is a child protection attorney who has investigated international child trafficking cases. Her website is: YoreChildren.com

[Comment Guidelines - Click to view]
The Remnant values the comments and input of our visitors. It’s no secret, however, that trolls exist, and trolls can do a lot of damage to a brand. Therefore, our comments are heavily monitored 24/7 by Remnant moderators around the country.  They have been instructed to remove demeaning, hostile, needlessly combative, racist, Christophobic comments, and streams not related to the storyline. Multiple comments from one person under a story are also discouraged. Capitalized sentences or comments will be removed (Internet shouting).
The Remnant comments sections are not designed for frequent personal blogging, on-going debates or theological or other disputes between commenters. Please understand that we pay our writers to defend The Remnant’s editorial positions. We thus acknowledge no moral obligation whatsoever to allow anyone and everyone to try to undermine our editorial policy and create a general nuisance on our website.  Therefore, Remnant moderators reserve the right to edit or remove comments, and comments do not necessarily represent the views of The Remnant.
back to top
Last modified on Tuesday, April 27, 2021
Tweet