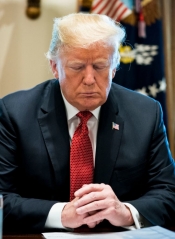 We now know how and why the media, and even our false conservative allies, conspired to paint a picture of a Biden/Harris landslide victory in the weeks leading up to the election. They wanted to keep President Trump’s voters at home and isolated, so they scared us into thinking we needed to anti-social-distance anytime we weren’t engaging in COVID-free activities, such as BLM riots.

They wanted to make us feel like outcasts, so the “anti-fascist” party bullied us into thinking that we were even more deplorable for supporting President Trump’s reelection than we were in voting for him initially. They wanted to suppress our enthusiasm and our votes. They wanted us to give up without a fight.

Now that the nation has voted, we see that we were not outcasts — well over 70 million fellow Americans wanted four more years of President Trump. Even after the media prematurely declared Biden/Harris the winner, we saw the enthusiasm on full display in Washington D.C at the MAGA March. Many thousand people turned out to boldly and joyfully show their support for President Trump and America.

The MAGA March also provided us a clear representation of what our enemies want — a small and ugly group of anti-Trump demonstrators (presumably ANTIFA) attacked and terrorized our president’s supporters. They went after the soft targets, those who would not fight back. They specialize in terror, intimidation and vulgarity. They want us to surrender our beliefs, or at least our willingness to act upon them.

Do we understand that they would not be trying to suppress our enthusiasm and our faith now if it were truly over? We saw the media rush to anoint Biden/Harris as the winners even when critical battleground votes were still being counted. They control what they can control, but they also seek to control what we now control. That only happens if we let them. They would not be wasting their time or effort if they did not fear the power we actually have. To them, we are dangerous prey who must be coaxed or cudgeled into the cage. Once they have us, they have us. Until then, their game is to “look big and mighty” when necessary, and peaceful when necessary, so that we keep backing into our cage. These people — who will always hate us so long as we stand for truth and goodness — are using every trick they have to convince us to surrender.

It is difficult for us to grasp how important this moment is in American history and we may tend to minimize the significance in attempt to “stay sane” or avoid stepping out of line. But we can see that it is of monumental importance if we consider the immense worldwide effort to remove Trump leading up to November 3rd, the rush to declare victory after the votes were cast, and the extensive efforts to silence us now. Even if we had not heard of the “Great Reset,” we could easily observe that removing President Trump is the goal that unites all those who hate everything we hold dear. Is this the right time to listen to them as they tell us to give up and go along?

If we still have time, we must use the weapons Our Lord has given us. We “must pray as if everything depends upon God, and act as if everything depends on ourselves.” We are strongest when we entrust everything to God, especially when we do so by placing all we have in the hands of Mary. In this time, it seems especially vital for us to recall the message of Fatima. To that end, Archbishop Marcel Lefebvre’s sermon for the Feast of the Immaculate Heart in 1987 in Fatima is particularly relevant:

Let us try then to put ourselves into this setting today too, because what happened in 1917 is still true today, and perhaps even more than at that time, because the situation in the world is even worse now than it was in 1917. The faith is disappearing, atheism is advancing everywhere, and the Most Blessed Virgin Herself announced it. For although She wished to show us a vision of heaven, She also wished to speak about the earth. She told these children essentially: It is necessary to pray, it is necessary to do penance so as to stop the devastating effects of this terrible error, Communism, which will dominate the world if people do not do penance and if they do not pray and if they do not carry out my will.”

We must follow Our Lady of Fatima’s peace plan from heaven: prayer and penance are the weapons we have that our enemies cannot control. Their great strategy is to make Catholics lay down these weapons voluntarily. They do so by limiting the number of people who can wield the weapons effectively. This crusade to reduce the number of faithful Catholics began in earnest with Vatican II and found new impetus with COVID shutdowns. They also need to convince us that the time for prayer is either past or yet to come. And yet we know that there has never been a more important time in our nation’s history to earnestly seek God’s assistance.

Let us leave the outcomes of the individual battles to God, but trust and love Him enough to fight every one of them as best we can. The wicked one knows that his army cannot ultimately prevail against God. “If God be for us, who is against us?” (Romans 8:31). But there is a sense in which the devil can inflict more damage until we, as the Mystical Body of Christ, decide to fully enlist and submit ourselves entirely to God. In his Uniformity with God’s Will, St. Alphonsus de Liguori wrote, “there is no better way to serve God than cheerfully to embrace His holy will.” No matter what happens between now and inauguration day, we can and should cheerfully embrace God’s holy will by doing all we can to call down God’s blessings on America. Saint Alphonsus also wrote that St. Teresa would offer herself to God by saying, at least fifty times a day, “my God, behold me in thy presence; do with me and all that I have as thou pleasest.” When we can say that and truly mean it, we will know victory is near. We need to start now.

[Comment Guidelines - Click to view]
The Remnant values the comments and input of our visitors. It’s no secret, however, that trolls exist, and trolls can do a lot of damage to a brand. Therefore, our comments are heavily monitored 24/7 by Remnant moderators around the country.  They have been instructed to remove demeaning, hostile, needlessly combative, racist, Christophobic comments, and streams not related to the storyline. Multiple comments from one person under a story are also discouraged. Capitalized sentences or comments will be removed (Internet shouting).
The Remnant comments sections are not designed for frequent personal blogging, on-going debates or theological or other disputes between commenters. Please understand that we pay our writers to defend The Remnant’s editorial positions. We thus acknowledge no moral obligation whatsoever to allow anyone and everyone to try to undermine our editorial policy and create a general nuisance on our website.  Therefore, Remnant moderators reserve the right to edit or remove comments, and comments do not necessarily represent the views of The Remnant.
back to top
Last modified on Tuesday, November 17, 2020
Tweet

More in this category: « WAR IN HELL: I. Blitzkrieg and the Book of Esther A BRAVE NEW POST-PANDEMIC WORLD? »