WAR IN HELL: I. Blitzkrieg and the Book of Esther 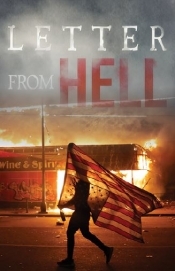 A. The Attempted Coup d’État

Saturday, November 7th, was the moment that I realized that these articles of mine had to change their name. What I once called “Letters From Hell” now must be labeled “War in Hell”. For war is what in fact broke out with the beginning of the coup d’état still being attempted against the real winner of the 2020 election.

I suppose that I should not have been surprised by the audacity of the traitors engaged in this coup. After the destruction of the minds of several generations of young Americans, after the assiduous pursuit of their seduction through the promotion of endless permutations on human sexual depravity, after four years of propaganda on the part of a news media perfecting a mixture of the techniques of Joseph Stalin and Joseph Goebbels through its incessant parroting of political lies and its effective liquidation of any knowledge of the existence of an opposition, what else should I have expected?

Was it really likely that the assault on the American Constitution by the arrogant journalists pontificating for decades regarding what the government must and must not do would not end in a clear, public assertion of their supreme authority by illegally usurping the “right” to declare who was President of the United States?  They long ago privately, in Uriah Heep like fashion, decided that they would one day possess all the cards, all three powers---executive, legislative, and judicial, wrapped up in one---in their dirty hands.

But one would need a poet like Horace, with his gift for lapidary judgments---“Captive Greece Led Her Captor Rome Captive”—to explain to the generally “useful idiots” of the mainstream Press that their supposed Supreme Authority is itself ironically enslaved to still more powerful illicit forces than these slimy wholesale word merchants could ever manage to wield. For, whatever they themselves might think, the media Napoleons---“Little Napoleons” to use Victor Hugo’s satirical title for Bonaparte’s nephew in mid nineteenth century France---are themselves for the most part merely paid agents of what the Great Proletarian Cultural Revolution might have called the “Six Bigs”: “Big Money”, “Big Pseudo-Science”, “Big Computer Technology”, “Big Think Tanks”, “Big Baby Killers”, and “Big Perversion” It is these forces that have now pushed their pathetic minions to crank up their pestilential presses for the final blow. Final blow against what? Against the “Six Littles”, which, moving upwards from the natural world to the supernatural, are “Reason”; “Morality”; “The Family”; “Normal Social Life”, “The Legitimate State”; and, most importantly of all, “The Roman Catholic Church”.

Despite the logic of this coming out of the closet, I still have to confess that it shocked me to the core to have to witness all of the fools who accept the pronouncements of the useful idiots of the Leviathan Press as Gospel Truth dancing their body-snatched dead souls through New York City, celebrating nothing less than the end of free speech, free elections, and the general right to live as human beings, both individually and socially. They howled their way through the streets and parks of the Rotted Apple until the wee hours of Sunday morning, reveling in the proclamation of the coup d’état by the Associated Press and Fox News as though it were the announcement of The Rapture. I guess for them it was. For they are by now so depraved, brainless, and enslaved that a Biden-Harris Regime, with its promise of an endless continuation of phony pandemic lockdowns and atomistic isolation, must amount in their eyes to nothing less than the offer of the Beatific Vision.

B. Delay Preparations No Longer---This is It!

There is not the slightest doubt in my mind that we are now at war; at total war; at grips with an enemy that has signed an aggressive alliance with Satan and is ready to fight until the bitter end. It has no choice but to attempt to crush us entirely, for should it lose, its Crimes Against Humanity would drag down not just Biden, Harris, Pelosi, Fauci, Cuomo, de Blasio, Governor Nuisance of California, the Press, and other domestic opponents of the laws of God and Nature, but the whole international household of horrors along with them.

The corrupt mass media will ratchet up every tool to demoralize us: claims of the baselessness and hopelessness of a fight for an accurate vote count; threats of millions flopping instantaneously dead from their parlor windows at the hands of the Covid God if we do not divert our attention from elector fraud to fear and trembling before that awesome divinity’s irresistible strength; psychological studies of our abnormal behavior and our need for surgery under the scalpels of Truth and Reconciliation Commissions to enter the ranks of the body snatched, dead soul army. And if this does not do the trick---God help us if we succumbed under such ultimately petty pressure---it will call out the riotous Biden-Harris mobs to terrorize us and burn down our country and make us put on our Slave Muzzles once and for all.

We cannot sit and wait for our psychological and physical torture to intensify as though this were just another prelude to the final battle. This is the final battle. Put on the armor of the Lord, right now, today, and do not take it off until the Unconditional Surrender of our opponents. Let us dedicate ourselves to two offensives simultaneously in the process.

First of all, deep and steady prayer that there are enough honest and courageous justices left in our troubled land---especially at the level of the Supreme Court---to recognize the evil that has been done, continues to be done, and will not stop being done until every remnant of the True, the Good, and the Beautiful is obliterated from this society suffering a sickness unto death. And, secondly, preparation for massive and consistent civil disobedience should all honor and sense of duty have disappeared from the bench; should the coup leaders, in consequence, temporarily gain the upper hand to impose their dictatorial, anti-God and anti-human will upon a prostrate country. We simply have no choice any longer. The alternative will be to wait, hopelessly, until our final consignment to the Gulag. The time for serious, practical, ORGANIZATION, alongside deep and persistent prayer, is now!!! The enemy counts on its Blitzkrieg tactics to end the war before it really fully begins.

It is also important that we remember that we Catholics have non-Catholic allies in this final battle. Here in New York City, the strongest of these have been the Jews of Brooklyn, who have repeatedly spat in the faces of our local Hitler and Stalin—Cuomo and De Blasio---aided, legally, by our indefatigable legal “David”, Chris Ferrara. May the God of Israel lead all of them in the long run to faith in Christ and Christ’s Church.

Right now, however, both they and we can steel ourselves for immediate combat with the hope that comes from a source that we share in common: the Book of Esther. Here, we read of the plot in the Persian Empire to exterminate God’s People promoted by Haman, who casts lots (purim) in order to determine what date the coup against them should be unleashed. His chief opponent, Mordecai, puts on sackcloth and ashes, calling upon the Lord of Hosts to save them. All of his fellow Jews follow his lead and dedicate themselves to prayer and sacrifice.

But Mordecai does not just pray. He also mobilizes in a very practical way his relative and ward, Esther, to plunge into the centers of Persian power to overturn Haman’s wicked plans. She succeeds, and Haman is literally “hoisted on his own petard”, hung on the gallows from which he planned to murder Mordecai. Rather than the People of God, it is now their bitter enemies who are completely eradicated.

The Six “Bigs”, their Little Napoleon allies in the Press, a senile Joe Biden and the real “President-Elect” of the leaders of this coup d’état have “cast their lots” against us. Mordecai and Esther have shown us what needs to be done to thwart their project. Let us follow their lead and live to see our current Hamans hoisted on their own petard. Put on the Breastplate of St. Patrick spiritually, organize like crusaders, and let them see that we are not the “Littles” that they think we are. Deus lo vult! We are at war; a just war; a war we did not want; a war that has been forced upon us by the Enemy of Mankind and his servants; a war they ultimately cannot win.