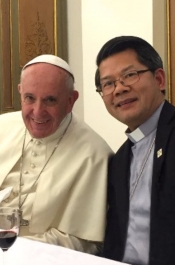 Catholic educators should have little excuse to stray from the clear guidelines set forth by the magisterium. For example, Pope Leo XIII wrote that in Catholic schools, the Faith “is to be preserved, whole and entire”.[1] In this same encyclical, he also asked that parental freedom be respected. Pope Pius XI taught that “ that there can be no true education which is not wholly directed to man’s last end...:”[2] And it was Pope Paul VI who said that parents are the “primary and principle educators” of children and that teachers are only the “partners” of Catholic parents. [3] How disappointing it was, then, to learn of the new curriculum being trialled by Parramatta Diocese in New South Wales, Australia - the content of which poses a significant threat to the faith of its students and which is deliberately being kept from parents.

The draft programme is endorsed by Bishop Vincent Long and was released in a limited fashion in February of this year. Bishop Long gained notoriety during Australia’s 2017 referendum on marriage equality when he voiced his support for same-sex ‘marriage.’ In 2019, Bishop Long’s teachers were given a document on LGBTI resources which lists books by the dissident Fr James Martin and websites such as the Global Network of Rainbow Catholics. As if to confirm the heterodox agenda, the Diocesan Facebook page is littered with posts from Cardinal Tagle, Archbishop Gregory Wilton, calls for ‘integral ecology’ and posts about a recent workshop on Centering prayer.

According to the introductory section of the draft curriculum, it is based on what its creators refer to as a “transformation” model that “puts the personal learning growth of young people at the centre.” This model favours process over content and is Pope Francis’ preferred system of education. It echoes the Pope’s “head, heart and hand” approach to learning, which is a hallmark of his pedagogy and which underpins his Global Education Pact.

The transformation model has its basis in the work of the Jesuit Bernard Lonergan, a theologian who was an associate of Karl Rahner. He was known to have disagreed with the Church’s teaching on contraception[4] and he also promulgated the doctrine of Immanentism.[5] This is the heresy which teaches that the truth can be found within man, rather than revelation needing to be handed down by the magisterium. It is, as Dr. Dennis Q. McInerny, explained, “recklessly subjective”, replacing the true God with “a fiction of one’s own devising, a pseudo-being having its source nowhere else but in the demands of deep-set emotions.”[6]

The curriculum was authored mainly by theologian Anthony Maher. Maher is a proud  Modernist who wrote a book defending the excommunicated Jesuit, George Tyrrell, in which he slams Pope Pius X’s encyclical Pascendi for its “vitriolic language, personal threats, and the projected images of narrow-mindedness [which] represent the death rattle of Neo Scholasticism.”[7] Ironically, Maher’s draft curriculum is promoted as being structured in the tradition of St. Thomas Aquinas, but its contents bear little resemblance to the work of the Angelic Doctor. Rather, it reads more like a litany of the very errors condemned by Pius X. 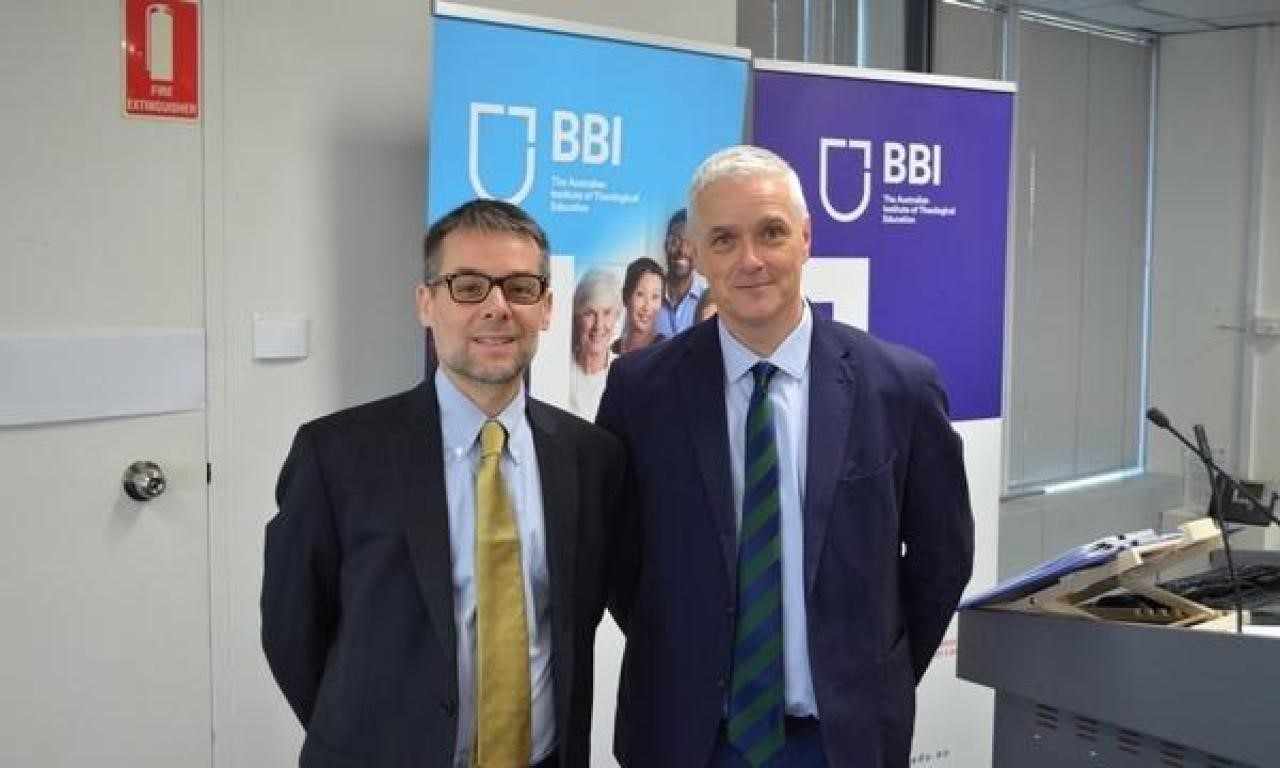 In praising the new curriculum, Bishop Long says that Catholic schools should provide a Catholic education for all[8] which explains one of the core principles of this course: it is designed to cater to non-Catholics. Its creators have done an admirable job in that regard, as there is little that would offend a non-Catholic’s sensibilities.

This attempt to placate non-Catholics is known as ‘Receptive Ecumenism” a term that does not exist in pre-conciliar - or even conciliar - documents. It was coined in 2008, in response to the self-confessed ineffectiveness of the ecumenical movement. This updated form of ecumenism dispenses with the idea of evangelisation; Catholics should no longer promulgate Catholic teaching but rather, should “listen to the other”. According to the draft document, the concept of Receptive Ecumenism will be introduced at the Grade 3 level along with the principles of dialogue, encounter and interfaith relations.

The course includes what has sadly become the norm for Diocesan Catholic schools: sloppy catechesis on sin, which has been substituted for the reminder that people sometimes make “wrong choices.” The topic of evil is covered in Grade 6 under the heading of “mystery, myth and metaphor”, a title which does not inspire confidence in its ability to convey the objective reality of satan and his iniquitous works. Liberation theology also makes an appearance in Grade 6, which is somewhat unsurprising given Anthony Maher’s predilection for this heresy.[9]

Another clear heresy contained in the course is that of indifferentism, which was condemned by Pope Gregory XVI in Mirari Vos.[10] The outline for Grade 3 states that “in God’s plan of salvation, there are a variety of different beliefs and pathways to God.” This statement, which is the theme for the module, is the very essence of indifferentism; the same module states that “holiness is open to all people of good will.”

The course contains a heavy emphasis on indigenous Australian spirituality. Grade 5 children are to be taught that “the Dreaming”, which is an important part of Aboriginal spirituality, has relevance for their everyday lives. One of the learning outcomes for Grade 6 children is that they will “receive insight from Indigenous Peoples with regard to Spirituality and Care of our Common Home.”

Perhaps the most concerning aspect of the course for parents in our contemporary societal climate is its emphasis on sexuality, specifically in relation to same-sex attraction and transgenderism. In an August 20 newsletter to the Cathedral parish[11], the Dean and Administrator, Fr Peter Williams, sought to reassure parents that these topics are covered only at the grade 10-11 level, but this is simply not the case.

According to the draft curriculum, children as young as ten are expected to learn that “respect [for] sexual identities is an essential attribute to human flourishing and to “recognise sexuality as an exploration in forming personal identity as a prerequisite for human flourishing”. Children are encouraged to question whether or not sexual identity is a result of nature or nurture and whether sexuality is “optional.” The lesson plans for Grade 6 (eleven year olds) will be discussing how to recognise an authentic life partner - note that this is not restricted to a spouse, much less to a partner of the opposite sex.

Thankfully, some are speaking out publicly against the new curriculum. Latin Mass chaplain for the Wagga diocese, Fr Terence Mary Naughtin OFM,Conv. told LifesiteNews that the word, “inclusion”, which features prominently in the programme, effectively means “compromising the Gospel of our Lord Jesus Christ in order to accommodate sinful lifestyles” and should be rejected.[12]

Additionally, two priests, Fr John O’Neill and Fr John Rizzo, wrote responses to a Daily Telegraph article, slamming the new programme. Fr O’Neill wrote that the Catholic Education Office has no authority over parish schools and that he has placed a ban on use of the course in his school.

Fr Rizzo, who was subsequently summoned to the Parramatta Chancery, wrote to “ …  remind the Catholic Education Office of Parramatta of their crucial responsibility in teaching their students of the importance of the 10 Commandments; likewise the Catholic teachings of morality, especially in regards to the Church’s teachings on proper relationships, marriage between a man and a woman; abstinence before marriage; the evils of pornography; the love of purity; the avoidance of homosexuality…”

The Diocese of Parramatta would be wise to put the breaks on this draft curriculum which is causing so much consternation. It contains outright heresy, as well as enough ambiguity to make the authors of the conciliar documents blush. In promulgating indifferentism, liberation theology, indigenous spirituality, sexual deviance and gender theory, this programme will feed some of the worst aspects of Modernism to our most vulnerable minds whilst simultaneously denying them the fullness of the beauty of our Catholic Faith.

[Comment Guidelines - Click to view]
The Remnant values the comments and input of our visitors. It’s no secret, however, that trolls exist, and trolls can do a lot of damage to a brand. Therefore, our comments are heavily monitored 24/7 by Remnant moderators around the country.  They have been instructed to remove demeaning, hostile, needlessly combative, racist, Christophobic comments, and streams not related to the storyline. Multiple comments from one person under a story are also discouraged. Capitalized sentences or comments will be removed (Internet shouting).
The Remnant comments sections are not designed for frequent personal blogging, on-going debates or theological or other disputes between commenters. Please understand that we pay our writers to defend The Remnant’s editorial positions. We thus acknowledge no moral obligation whatsoever to allow anyone and everyone to try to undermine our editorial policy and create a general nuisance on our website.  Therefore, Remnant moderators reserve the right to edit or remove comments, and comments do not necessarily represent the views of The Remnant.
back to top
Last modified on Wednesday, September 9, 2020
Tweet

More in this category: « AN AMERICAN IN TOKYO: Catholic Japanese Take Pro-Life Message to the UN THE NEW HESSIANISM: Spare the rod, prepare the tear gas »