THE NEW HESSIANISM: Spare the rod, prepare the tear gas 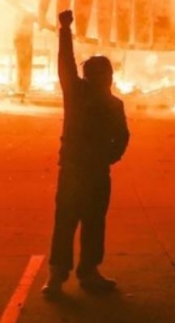 A Reason article from earlier in August reports that police officers in Key West were called to Gerald Adams Elementary School to arrest an eight-year-old boy. The boy was so slight of frame that the handcuffs the police used to detain him fell off of his wrists. Undeterred, the police brought the boy to the station and booked him with felony battery.

In February of this year, Orlando police were called to a charter school where they arrested a six-year-old girl. The same officer had arrested another six-year-old at a different school that very same day.

The first response by many on learning of the arrests—and they are far from uncommon—of elementary-school kids will be to lament police brutality. This is understandable given the fact that incidents involving police officers have dominated the news these past few months.

But consider that in the three cases mentioned above, the police officer was called to the school. These were not instances of a rogue policeman looking for a child to haul off to the station. The people charged with caring for the children decided to pass the responsibility, at least in part, on to someone else.

When I was a kid I misbehaved a lot in school. I spent most of the third grade sitting in the “desk of honor” right next to Mrs. Glaser so she could keep an eye on me. (My hobby was drawing tank-and-fighter-plane battle scenes in pencil in the margins of the parish’s nice new geography textbook. Mrs. Glaser was an avowed philistine when it came to my battle art.)

I spent much of my after-school hours in the sixth grade writing on the chalkboard that I would not do such-and-such a thing again. I spent about half my time in high school with a plastic five-gallon bucket walking around my parents’ property picking up rocks and then dumping them into a useless mound in the corner by the woodpile—a punishment for mouthing off (it happened a lot) that gave me a lifelong sympathy for my soulmate, Sisyphus.

The only time the police were called on me was when I and my soccer-team buddies had gone skinny-dipping in beautiful Chickamauga Lake one warm summer’s night when we were about seventeen. We were discreet about it (except for the part where we shouted with pure joy while diving off a low roadway bridge along a very rural stretch of road into the inviting waters below). A passing car must have seen one of us climbing back up to the bridge to practice a gainer. A police car showed up a little later and the officer stopped, got out, told us not to be loud, and drove away. We finished our swim and slunk back, nekkid and chastened, to our cars parked in a clearing around the bend.

I kept my nose clean after that showdown with Johnny Law. Truth be told, I was infinitely more terrified of telling my parents that I had had a run-in with the police than I was of the lawman himself. I would still prefer Sing Sing to bucketing chunks of Tennessee limestone.

Looking back, I can see that the reason I didn’t end up in prison for some fool thing or another is that my parents and teachers took the time to discipline us right. That included paddling us every now and then. Paddling, I think, ought to make a comeback in our Covid Year. If you want to stave off Marxist revolution, the best thing you can do is sear sass-mouth punks on the hindquarters with a shapely bit of two-by-four. It worked for me. I will never, ever be a Marxist.

One of my favorite classes in middle school was civics because I loved and respected, and feared, the teacher, a rail-thin black man who was a quick draw with the paddle. He liked to point out that he had drilled holes in the paddle to reduce wind resistance and “improve efficiency”. We gulped at that, and he kind of grinned. He kept us in line, God bless that man. And the community applauded him for it.

On any given day our civics teacher was liable to bring up one of the usual suspects to the front of the class where the boy (nobody, but nobody, dreamed of hitting a girl) would have to bend down, grab his ankles, and wait for a wallop on the backside with a slab of oak as thick as uncut bacon. The paddlee would wince, his eyes would smart tears, and he would go back to his seat, pride and butt both bruised a little, there to reflect on what he had done. I saw many a budding criminal reformed in civics class.

But all of that messy business of the stern teacher and the stern parents and the school principal who was, literally, also the sheriff seems lost now. When I was growing up I didn’t know anyone—most especially the bad kids—who questioned that there was a right and a wrong. But now we are told that right and wrong are racist (huh?) and that kids ought to be allowed to express themselves. Well, Kenosha, look at the kids expressing themselves. And the police stand in the breach between the lawless, unpaddled kids and the society that never brought itself to discipline them. The police have gone from being the last resort when a robust social order breaks down, to being the only social order that America has got left. Spare the rod, prepare the tear gas.

What we seem to be creating for ourselves, by involving the police in things that used to be settled with a timely application of belt to posterior or of soap to mouth—of shame to sin, right where shame belongs—is a civilizational Hessianism, whereby the only way we know how to solve interpersonal problems and enforce the moral code is by having armed phalanxes show up and open fire. I submit that that isn’t working very well, and that we ought to think of another way to do things.

Growing up, the one indispensable lesson we learned was that those who flaunted the moral code of the cosmos would get some instant karma, and good, via the Furies known as parents and teachers. Our elders were far from perfect, but that was beside the point. They had the authority and they also had the obligation to use it when we crossed a line.

Putting kids in handcuffs is to expose them to a different kind of authority, one wholly unsuited to the problem. The little girl who was put in the back of a police cruiser learned nothing that day except that her teachers saw her as a problem to be shunted off to someone else, and that authority was capricious, meaningless, and cruel. My civics teacher’s paddle, though—now, that’s the instrument of justice. Would that there were more teachers, and parents, like him today.

[Comment Guidelines - Click to view]
The Remnant values the comments and input of our visitors. It’s no secret, however, that trolls exist, and trolls can do a lot of damage to a brand. Therefore, our comments are heavily monitored 24/7 by Remnant moderators around the country.  They have been instructed to remove demeaning, hostile, needlessly combative, racist, Christophobic comments, and streams not related to the storyline. Multiple comments from one person under a story are also discouraged. Capitalized sentences or comments will be removed (Internet shouting).
The Remnant comments sections are not designed for frequent personal blogging, on-going debates or theological or other disputes between commenters. Please understand that we pay our writers to defend The Remnant’s editorial positions. We thus acknowledge no moral obligation whatsoever to allow anyone and everyone to try to undermine our editorial policy and create a general nuisance on our website.  Therefore, Remnant moderators reserve the right to edit or remove comments, and comments do not necessarily represent the views of The Remnant.
back to top
Last modified on Friday, September 11, 2020
Tweet

More in this category: « Parramatta Diocese Builds a Bridge to Heresy INTERVIEW BY MARCO TOSATTI WITH ARCHBISHOP CARLO MARIA VIGANÒ »