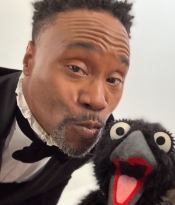 He’ll even appear in a massive, steam punk-esque ball gown (because, why? Who knows!) and he’ll discuss the “issues of the day” including, of course, the LGBT program with the cast of fuzzy puppets.

Billy Porter’s gonna tell your kids “how to get, how to get to Sesame Street."

YAWN! Sorry, Bill, but we're all kinds of over getting triggered by guys like you. In this cartoon world of ours, you're just another prop wheeled out from stage left -- another abused kid who doesn't have a thought in his head that wasn't put there by the social engineers that created you.

Bill's a puppet, which is why he's on Sesame Street.

I've got seven children and, regardless of Bill in his fancy dress -- my kids have never and will never watch Sesame Street. In other words, they're only abusing their own kids down on Sesame Street.

Just like Drag Kween Storytime at the local library, the only story here is the monumental cluelessness of Left-leaning parents who'll let the guys in the raincoats on Sesame Street drag their little kids into the psychological drama of gender-confused adults. The parents are the abusers here.

They used to make movies about guys like our Buffalo Bill here. The Silence of the Lambs comes to mind. Now they put them on kids' shows so that maladjusted people can use them to conduct social experiments on their own kids.

Again, Bill, no offense but there's nothing new here. You were always in the Sesame Street closet.

But let’s talk about the costume for a second. It's Halloween all year long for these cats, I realize. But seeing as how nobody short of Dolly Parton at the CMAs wears sequins, why do they treat drag like it’s normal in an everyday environment? When you’re leaving your house on a regular basis, tricked out like it’s Friday night at the Peppermint Hippo, it shouldn’t be difficult to guess why people give you a wide berth.

If Bill and the rest of the fragile, attention-craving kweens would like to try the role of “normal human individual” for a second, they wouldn’t need to fight so hard for acceptance, and they certainly wouldn’t need to go desperately seeking it from children.

And as for Sesame Street? It's all par for the course. Traditional Catholics were onto that brainwashing rot a half-century ago.

Writing in these very same columns, my father used to excoriate Sesame Street, Mr. Roger's Neighborhood, The Muppets, etc., on a regular basis. Why? For being little more than televised anti-Catechism lessons produced by the anti-Christians.

He used to argue that children's television programs in the 1970s were programming whole generations to accept without question the entire Christophobic philosophy of the sexual and Marxist revolution and its new world order.

And he wasn't messing around.

I was seven years old, sitting in our second grade classroom at St. Agnes Catholic School in St. Paul, Minnesota when my teacher announced that next week and every week after that, the class would be watching The Electric Company-- the Emmy-winning "instructional series" (1971-1977) served up by Children's Television Workshop (now called Sesame Workshop), the creators of "Sesame Street."

Ostensibly, The Electric Company was all about teaching basic grammar and reading skills to kids 6-10 through skits, songs, sketch comedy and animated segments. Yeah, right! (This was PBS, and it was financed by the Department of Health, Education and Welfare, the Ford Foundation, the Carnegie Corporation of New York, etc.)

My father got wind of my teacher's fascination with The Electric Company and two things happened: 1) He came to school with me the next day to tell my teacher there was no way in hell his son was going to be watching The Electric Company and 2) I was pulled out of St. Agnes--the most conservative Catholic school in the state--at the end of the year.

But for the rest of that year, there was little Mikey Matt sitting in the classroom by himself once a week, while everyone else went down the hall to the AV room to watch The Electric Company.

Watch this clip if you want to understand why I thank God for my parents every day:

People ask me all the time: What was your parents' secret? How did they keep all nine of you in the traditional Catholic faith through the worst revolution in history?

You know what? I think this little anecdote is at least part of the answer to that question. My father challenged everything -- from the puppet show going on at the New Mass, to the Modernist puppeteers running the Church of Vatican II, to the brainwashing puppetry going on inside the TV.

Paranoid? Extreme? Yeah, whatever! My mother and father died a few years ago, leaving behind 135 practicing traditional Catholic grandchildren and great-grandchildren.

How'd they do it?  They took St. Paul seriously and, to whatever extent possible, "came out from among them"-- no Novus Ordo Mass, no rock 'n' roll music in the house, very few movies and absolutely zero tolerance for children's television programs. And we loved them for it!

And now they're trotting out drag queens on Sesame Street.

Well of course they are!

[Comment Guidelines - Click to view]
The Remnant values the comments and input of our visitors. It’s no secret, however, that trolls exist, and trolls can do a lot of damage to a brand. Therefore, our comments are heavily monitored 24/7 by Remnant moderators around the country.  They have been instructed to remove demeaning, hostile, needlessly combative, racist, Christophobic comments, and streams not related to the storyline. Multiple comments from one person under a story are also discouraged. Capitalized sentences or comments will be removed (Internet shouting).
The Remnant comments sections are not designed for frequent personal blogging, on-going debates or theological or other disputes between commenters. Please understand that we pay our writers to defend The Remnant’s editorial positions. We thus acknowledge no moral obligation whatsoever to allow anyone and everyone to try to undermine our editorial policy and create a general nuisance on our website.  Therefore, Remnant moderators reserve the right to edit or remove comments, and comments do not necessarily represent the views of The Remnant.
back to top
Last modified on Monday, February 3, 2020
Tweet