Can the Church Canonize a Pope While Ignoring His Papacy? 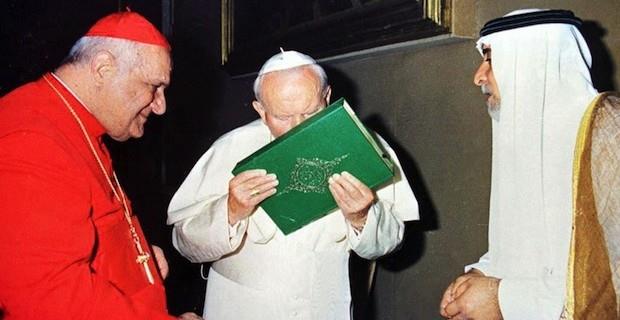 Pope John Paul II is being beatified not because of his impact on history or on the Catholic Church, but because of the way he lived the Christian virtues of faith, hope and love, said Cardinal Angelo Amato, prefect of the Congregation for Saints' Causes…

Cardinal Amato said the sainthood process is one of the areas of church life where the consensus of church members, technically the "sensus fidelium" ("sense of the faithful"), really counts."From the day of his death on April 2, 2005, the people of God began proclaiming his holiness," and hundreds, if not thousands, visit his tomb each day, the cardinal said. A further sign is the number of biographies published about him and the number of his writings that are translated and re-published…

Cardinal Amato said, "the pressure of the public and of the media did not disturb the process, but helped it" because it was a further sign of Pope John Paul's widespread reputation for holiness, which is something the church requires proof of before it moves to beatify someone…

[Joaquin Navarro-Valls, who served as Vatican spokesman under Pope John Paul], a member of Opus Dei, said he had the blessing of personally knowing three saints: Josemaria Escriva de Balaguer, founder of Opus Dei; Blessed Teresa of Kolkata; and Pope John Paul.What all three have in common, he said, was a good sense of humor, a ready smile and an ability to laugh.As for those who question beatifying Pope John Paul only six years after his death and those who say the explosion of the clerical sex abuse scandal during his pontificate casts a dark shadow on his reign, Navarro-Valls said people must remember that beatification is not a judgment on a pontificate, but on the personal holiness of the candidate.The key question, he said, is: "Can we be certain he lived the Christian virtues in a heroic way?"

Thus, Cardinal Amato and former John Paul II spokesman Navarro-Valls make the unprecedented assertion that the Church can beatify, and therefore canonize, a pope based solely on the exhibition of virtue in his personal life, while not even considering his almost three-decade long pontificate. As anyone can see, this idea is preposterous. Candidates for formal canonization have always been judged on the heroic virtues of their lives as a whole. This is especially true for popes, as their pontificates are integral to their lives as Catholics.

This being the case, did John Paul II truly live out the heroic Catholic virtues of faith, hope, and charity in his pontificate? Does Assisi I &II, praying with animists at Togo, and asking St. John the Baptist to protect Islam display a heroic exercise of the virtue of faith? To the contrary, the Catholic virtue of faith would forbid these things in virtue of the First Commandment.

As for the virtue of hope, it is the hope that if we as Catholics cooperate with grace we will save our souls. But how can one say John Paul II heroically exhibited this virtue, when through the words and actions of his pontificate, he consistently gave the appearance of hope that non-Catholics can be saved through their own false religions? Also the Catholic virtue of Hope presumes the possibility of going to Hell or else there would be no need for hope. But since John Paul II questions whether any human souls are even in Hell, how can one say he exhibited the virtue of hope to a heroic degree?

Also, the Catholic virtue of charity would demand that a pope correct and discipline numerous prelates and priests who spread heresy and error in the Church. To the contrary, the only notable prelate John Paul II disciplined during his pontificate was Archbishop Lefebvre. Similarly, the virtue of charity demands the correction of widespread liturgical abuse for the sake of God, who deserves right worship, for the sake of the souls of the priests who commit these sacrileges, as well as the sake of the souls of the faithful who were constantly scandalized by such actions. Instead, although John Paul II apologized for liturgical abuses, he did little or nothing to stop them.

In response, some have brought up St. Celestine V as a pope who was personally holy but failed to have a successful pontificate. But the cases of John Paul II and St. Celestine are entirely different. First of all Celestine was only pope for six months. Secondly, while Celestine’s heroic holiness and severe penances as a monk are beyond dispute, he simply did not have any experience whatsoever in the government of the Church. Because of this naiveté he proved to be a terrible administrator by the world’s standards. But never during the course of his papacy did Celestine fail to exhibit any Catholic virtue, much less participate in public acts that would give reason to question that virtue.

Indeed, it is impossible to divide the one person of John Paul into two separate and distinct entities for canonization purposes. The Church cannot canonize the part of John Paul II who people say exhibited private heroic virtue, while ignoring the consistent lack or even opposition of those virtues in the course of a twenty-seven year pontificate.

Published in Fetzen Fliegen
back to top
Last modified on Friday, March 28, 2014
Tweet

More in this category: « Vatican unexpectedly ends crackdown of US nun group A Fourth Person in the Blessed Trinity? A Comment on the Latest 'Chris and Mike Show' »