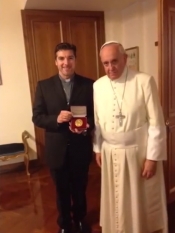 Pope Francis and Tony Palmer
In a recent interview, Bishop Fellay, Superior General of the SSPX, was asked what we should think of the recent beatification of Pope Paul VI. He responded as follows:

It simply isn’t serious. The conclusion is that anyone can be a saint, especially if they are pro-Vatican II! Anything to do with Vatican II is now holy, beatified, canonized. Yet again, it is a way of trivializing holiness. It is no longer serious, it just isn’t serious! It hurts, it hurts us deeply. Religion is being ridiculed. A saint must shine by his virtues, his heroic virtues; he must be an example to be followed. And it is sad to say, but what they are doing here is not serious.

On October 10th, Pope Francis had a meeting with the International House of Bishops of the The Communion of Evangelical Episcopal Church. The meeting had been previously set up by the late Tony Palmer. Palmer was a Protestant friend of the Pope’s who received a Catholic requiem Mass and was buried as a bishop by order of Pope Francis. This despite the fact that Palmer was a Protestant and did not have valid orders. During the meeting Pope Francis stated the following:

…Right now in Middle East, and Africa, and so many other countries, how many Christians are being killed! They’re not asked if they are Pentecostals, or Lutherans, Anglicans, Catholics, Orthodox. They’re Christians; and they’re being killed because they believe in Jesus Christ. This is ecumenism of the blood.!

I remember one time in Hamburg, in 1986-87, and I met a parish priest. And that parish priest was bringing the cause for the beatification of a Catholic priest who was guillotined by the Nazis for teaching the Catechism to children. During his research he saw the list of those sentenced to death that day and right behind him was a Lutheran pastor who was condemned for the same reason. So that the blood of the priest mixed with the blood of the pastor. The priest went to the bishop and said, “either I bring both the Cause for both together, or neither. That’s ecumenism of blood.

Thus, Bishop Fellay’s statement that “anyone can be canonized a saint” may be even more true than he intended.  The question then must be asked: Does Pope Francis believe that non-Catholics can be canonized Saints? And if he does, what does that mean for the validity of the canonizations he has already performed? For if a Pope does not hold to the Catholic definition of sainthood, does he intend to canonize true Catholic saints? And if he does not, is the formula of canonization alone enough to infallibly guarantee the result? Can a formula alone give a papal act a character the Pope himself does not wish it to give?

This is not the first time the Pope has mentioned the canonization story regarding “the ecumenism of blood.” He first told the story last October in an interview given to Andrea Tornielli.

Back in March, I examined this issue in detail in an article entitled, From the Devil’s Advocate: Will Saint John Paul Open the Door to Non-Catholic “Saints”? With the Pope now reiterating his admiration for the priest who proposed a Protestant canonization, and the canonization of Pope Paul VI looming before us, maybe this article deserves another read.

In the meantime, view the Pope’s meeting on October 10th below, and consider for yourself whether he holds to the traditional concept of Catholic Sainthood, or, for that matter, any traditional Catholic concepts regarding non-Catholics.

Published in Fetzen Fliegen
back to top
Last modified on Monday, November 3, 2014
Tweet