“I'm shocked to find out gambling is going on!”  ~ Casablanca

The Deep State Church mastered the art of crisis management talking points. Make no mistake that the diocese media consultants carefully synchronized their statements about the Cardinal Theodore McCarrick sex abuse debacle. The purpose of crisis management is to contain the scandal and thwart any further disclosures of wrongdoing.

They carefully coordinated and perfectly timed the press statements of the four targeted dioceses which were all released to the press on June 20, 2018. Sprinkled throughout the diocesan statements and the subsequent talking heads, was the recurring theme and operative word: Shocked. Yes, they were all shocked that Cardinal Ted McCarrick was accused of sexual misconduct. The more operative interpretation of the use of the word “shocked” is that they were all “shocked” that the all powerful, and uber connected Teflon Ted was finally outed after a clerical lifetime of sexual abuse. 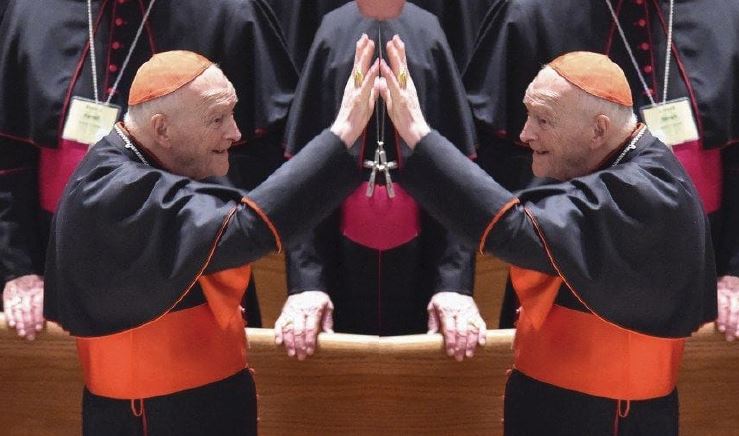 Despite their hyperbolic protestations, no one is buying the “shocked” line.

The first rule of crisis strategy is to insist that the team all stay on message. The second media principle is to get out in front of the story. The U.S. Catholic Church leaders made a concerted decision to release the N. J. abuse settlements and NY allegations before any rogue attorney or victim disclosed the scandalous information. They got out in front of the McCarrick story employing the coordinated strategy and talking points.

The Church Fathers were hoping for an intense, but short-lived 24 hour news story cycle about the McCarrick abuse allegations. They sorely misjudged the fury of the Catholic laity, many of whom had heard, but could never verify the persistent rumors of the predator McCarrick.

This sordid and outrageous scandal, as they say in the news business, has legs….much stronger than the Church’s shock troops.

This isn’t the first time that the Church scrambled to halt the cascading anger over the clerical sex abuse of children. The Boston sex abuse revelations forced the Bishops to impose new regulations on themselves by imposing a zero tolerance standard for sex abusing priests.

Conveniently, the Dallas Charter remained silent about Bishops who sexually abuse and cover up. And to quote that hypocritical and monstrous spokesman for the USCCB’s Dallas Charter to Protect Children in 2002, Cardinal Theodore McCarrick,

____________________
Elizabeth Yore is an international child protection and rights attorney who has investigated clergy sex abuse cases and sex trafficking.

[Comment Guidelines - Click to view]
The Remnant values the comments and input of our visitors. It’s no secret, however, that trolls exist, and trolls can do a lot of damage to a brand. Therefore, our comments are heavily monitored 24/7 by Remnant moderators around the country.  They have been instructed to remove demeaning, hostile, needlessly combative, racist, Christophobic comments, and streams not related to the storyline. Multiple comments from one person under a story are also discouraged. Capitalized sentences or comments will be removed (Internet shouting).
The Remnant comments sections are not designed for frequent personal blogging, on-going debates or theological or other disputes between commenters. Please understand that we pay our writers to defend The Remnant’s editorial positions. We thus acknowledge no moral obligation whatsoever to allow anyone and everyone to try to undermine our editorial policy and create a general nuisance on our website.  Therefore, Remnant moderators reserve the right to edit or remove comments, and comments do not necessarily represent the views of The Remnant.
back to top
Read 6201 times Last modified on Tuesday, July 24, 2018
Tweet