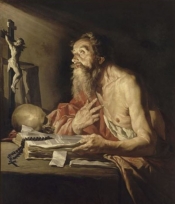 In our Gospel reading for the First Sunday of Lent it says that Our Lord and God Jesus Christ fasted forty days and forty nights, after which He was hungry.  It is traditionally understood that by being in the desert Jesus was without food or drink for forty days.  The Latin term for 'fast’ is jejunium which denotes an intestine which is always empty.  The Latin term associated with ‘Lent’ is quadragesima which refers to the ‘forty’ days.

In imitation of Christ, the Catholic Church also has a penitential period of forty days every holy season of Lent.  Beginning with Ash Wednesday through and including Holy Saturday, there are exactly forty days if one does not count Sundays.  Sunday, the day of Our Savior’s Resurrection, is not counted as a Lenten penitential day.

Unlike Our Blessed Lord, Who went forty days without food or drink, the Church permits us to eat and drink during the holy season of Lent with certain restrictions, which we call the Lenten Laws of Fast and Abstinence.

The Lenten Law of Fast, as in 1962, permits one full meal and two other meals, which when combined, are less than a full meal.   Today, as in 1962, the Lenten Law of Fast ceases to bind under penalty of sin once one reaches their 60th birthday.  In the present day the Law of Fast, under penalty of sin, only includes Ash Wednesday and Good Friday.  The traditional 1962 rules for fasting include every single one of the 40 days from Ash Wednesday through and including Holy Saturday.  When fasting, eating between meals is not permitted, but liquids are allowed, including milk or fruit juices.  The age for the Law of Fast has been lowered from 21 years old to the age of 18 in the United States.

The current Lenten Law of Abstinence, which requires abstention from flesh meat, begins at age 14 and only applies to Ash Wednesday and the Fridays of Lent.  The 1962 Law of Abstinence, which the Traditional Latin Mass Community is encouraged to follow, begins at one’s 7th birthday.  Both today and under the 1962 directives, the Law of Abstinence binds up to and including, the date of one’s death – there are no exceptions for advanced age alone.  However, when one’s health or ability to work would be seriously affected, the Laws of Fast and Abstinence do not oblige.

The current law does not prohibit soups or gravies made from meat.  However, the 1962 Lenten Law requires complete abstinence from meat, as well as soup or gravies made from meat on Ash Wednesday; all Fridays of Lent; and Holy Saturday.  All of the other days of Lent, under the 1962 Law, require partial abstinence; which means that once a day at the principal meal, meat and soup or gravy made from meat is permitted – again, only once per day.  The Laws of Abstinence do not apply to dairy products, eggs, or condiments and shortening made from animal fat.

Remember that while we are bound, under penalty of sin, to follow the generally relaxed Laws of Fast and Abstinence required in today’s Church; the Traditional Latin Mass Community is encouraged to adhere to the stricter 1962 rules in a spirit of penance, mortification and reparation.

The Holy Season of Lent is a time for the purification of our souls and the strengthening of our wills.  We follow the Traditional Catholic Laws of Fast and Abstinence because we recognize, as did the Saints that have gone before us, that the more we perform acts of penance, mortification and reparation, the stronger we will be to successfully resist temptation.

After His forty days and forty nights of fasting in the desert, Jesus repelled all the temptations of satan.  Our Dear Lord gave us an example to follow in order to strengthen us in the spiritual combat against the evil one.  The Traditional Latin Mass Preface for Lent teaches:

It is fitting indeed and just, right and helpful to salvation, for us always and everywhere to give thanks to Thee, O Holy Lord, Father Almighty, Everlasting God, Who by this bodily fast dost extinguish our vices, elevate our understanding, bestow on us virtue and its reward, through Christ our Lord.

The Traditional Latin Mass Laws of Fast and Abstinence can bring us victory against temptations, peace in this life, and lead us to happiness forever in the life of the world to come.

[Comment Guidelines - Click to view]
The Remnant values the comments and input of our visitors. It’s no secret, however, that trolls exist, and trolls can do a lot of damage to a brand. Therefore, our comments are heavily monitored 24/7 by Remnant moderators around the country.  They have been instructed to remove demeaning, hostile, needlessly combative, racist, Christophobic comments, and streams not related to the storyline. Multiple comments from one person under a story are also discouraged. Capitalized sentences or comments will be removed (Internet shouting).
The Remnant comments sections are not designed for frequent personal blogging, on-going debates or theological or other disputes between commenters. Please understand that we pay our writers to defend The Remnant’s editorial positions. We thus acknowledge no moral obligation whatsoever to allow anyone and everyone to try to undermine our editorial policy and create a general nuisance on our website.  Therefore, Remnant moderators reserve the right to edit or remove comments, and comments do not necessarily represent the views of The Remnant.
back to top
Tweet
More in this category: « "He Gassed His Own People!" Yeah, Right! UPDATED: Remnant Editor to Ski 50-K Race, Raise Money for Final Chartres Pilgrim Applicants »