"He Gassed His Own People!" Yeah, Right! 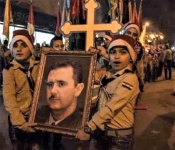 Back in May of 2017, The Remnant Underground asked the question: If Syrian President Assad is 'gassing his own people', why do the two million Christians in Syria support him?

Seems as though the media, and certain military bosses, have, since then, had to backpedal on that. According to an AP story:

Secretary of Defense James Mattis: the U.S. has “no evidence” that the Syrian government used the banned nerve agent Sarin against its own people. This assertion flies in the face of the White House (NSC) Memorandum which was rapidly produced and declassified to justify an American Tomahawk missile strike against the Shayrat airbase in Syria.…There were casualties from organophosphate poisoning in both cases; that much is certain. But America has accused Assad of direct responsibility for Sarin attacks and even blamed Russia for culpability in the Khan Sheikhoun tragedy. Now its own military boss has said on the record that we have no evidence to support this conclusion. In so doing, Mattis tacitly impugned the interventionists who were responsible for pushing the “Assad is guilty” narrative twice without sufficient supporting evidence, at least in the eyes of the Pentagon. READ THE FULL REPORT HERE

REMNANT COMMENT: It would seem that, in the case of the U.S. missile strikes against the Shayrat airbase in Syria, the still-new Trump Administration acted under the advice of neocon war hawks, but has perhaps since wisened up. At least let’s hope. The Syrian crisis has been put on the backburner for now, and one can only hope that the American people will remember this the next time that scary little story for children is trotted out---"he gassed his own people". Yeah, right!

[Comment Guidelines - Click to view]
The Remnant values the comments and input of our visitors. It’s no secret, however, that trolls exist, and trolls can do a lot of damage to a brand. Therefore, our comments are heavily monitored 24/7 by Remnant moderators around the country.  They have been instructed to remove demeaning, hostile, needlessly combative, racist, Christophobic comments, and streams not related to the storyline. Multiple comments from one person under a story are also discouraged. Capitalized sentences or comments will be removed (Internet shouting).
The Remnant comments sections are not designed for frequent personal blogging, on-going debates or theological or other disputes between commenters. Please understand that we pay our writers to defend The Remnant’s editorial positions. We thus acknowledge no moral obligation whatsoever to allow anyone and everyone to try to undermine our editorial policy and create a general nuisance on our website.  Therefore, Remnant moderators reserve the right to edit or remove comments, and comments do not necessarily represent the views of The Remnant.
back to top
Last modified on Saturday, February 17, 2018
Tweet