The Francis Effect Discussed in Rome Itself: The Catholic Church is Waking Up 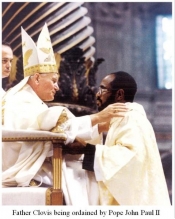 As Pope Francis continues his revolution against all things traditional, it is becoming clearer every day that faithful Catholics are beginning to wake up to what is really going on.

Please watch and share this video post.  Father Linus Clovis fearlessly addresses the issue of Pope Francis's compromise, the need to resist, the need to stay in the Church, the need to be ready to accept martyrdom rather than back down.

Father Clovis is a priest of the Archdiocese of Castries, St. Lucia in the West Indies.  He studied for the priesthood at the Angelicum in Rome and was ordained in 1983.  He holds a doctorate in Mathematics and degrees in Theology, Canon Law and Latin Literature.

Please keep in mind that Father Clovis is not addressing a Traditional Catholic conference. Rather he's addressing a group of pro-lifers who had gathered together, practically in the shadow of St. Peter's on May 8, 2015, to discuss the crisis in the Church--a crisis, they argued, that starts at the very top and that now threatens to 'come out of the closet' at the upcoming Synod on the Family.

Thank God for faithful priests such as Father Clovis for having the courage to stand up and speak the truth. Thank God for the men and women who organized this much-needed conference.

It goes without saying that our friends at Gloria.TV are doing monumental work in defense of our beloved Church under siege.

[Comment Guidelines - Click to view]
The Remnant values the comments and input of our visitors. It’s no secret, however, that trolls exist, and trolls can do a lot of damage to a brand. Therefore, our comments are heavily monitored 24/7 by Remnant moderators around the country.  They have been instructed to remove demeaning, hostile, needlessly combative, racist, Christophobic comments, and streams not related to the storyline. Multiple comments from one person under a story are also discouraged. Capitalized sentences or comments will be removed (Internet shouting).
The Remnant comments sections are not designed for frequent personal blogging, on-going debates or theological or other disputes between commenters. Please understand that we pay our writers to defend The Remnant’s editorial positions. We thus acknowledge no moral obligation whatsoever to allow anyone and everyone to try to undermine our editorial policy and create a general nuisance on our website.  Therefore, Remnant moderators reserve the right to edit or remove comments, and comments do not necessarily represent the views of The Remnant.
back to top
Last modified on Thursday, May 14, 2015
Tweet

More in this category: « CINOs and the Demise of the Neo-Catholic in America Get the Hell Out of Our Church, Your Excellency »