Novus Ordo Now Getting Its Liturgical Music From “My Little Pony?” 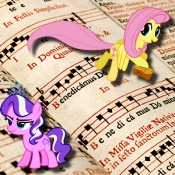 Although now a few months old, I recently came across the following story from Jeff Ostrowski on a blog entitled, “Views From the Choirloft: Reflections on Sacred Music & The Roman Liturgy.” Apparently Ex-Jesuit and Novus Ordo musical star, Dan Schutte, has been now reduced to drawing upon the theme to “My Little Pony,” a cartoon for girls, for melodic inspiration.

It is fascinating (and horrifying) to actually listen to the side by side comparison of Dan Schutte’s “Mass of Christ the Savior” (2010) and the theme from My Little Pony. As Jeff Ostrowski writes:

IN FEBRUARY, I asked if anyone else was uncomfortable with Dan Schutte’s “Mass of Christ the Savior” (2010)—which appears to be written in a secular style. 1 Here’s a brief recording showing Schutte’s melody (taken from YouTube) against the My Little Pony theme:

My original article was shared on Facebook 4,000 times, generated a surprising amount of hate mail, and was discussed on several radio shows.

A number of commenters said Schutte’s melody didn’t resemble the Pony theme. This assertion seems to have irritated one of my former students, who recently sent me a recording mixing both melodies:

Some might object to mixing the Sacred Mass texts with a secular Pony Song.

I agree … AND THAT IS PRECISELY MY POINT.

Having suffered greatly as a child due to trite & banal Church music, this is a subject I take very, very seriously.

1   The priest who discovered this Schutte/Pony similarity is currently Liturgy Director for a major Archdiocese in the United States. It was sent to me via email “chain letter.” Until I got his email, I had never heard Schutte’s Mass setting.

In a previous blog post on this topic from February, Ostrowski attempted to quote a John Paul II decree on Church music to justify his opposition to Schutte, and was almost apologetic for criticizing such a Novus Ordo musical legend. He writes:

ON 22 NOVEMBER 2003, Blessed John Paul II decreed that Church music must “avoid any concessions to frivolity or superficiality.” He went on to remind us of many other important things. For instance, he said neither vocal nor instrumental music can be used at Mass if it “does not possess a sense of prayer, dignity and beauty.”

A few years ago, we created this video which presented Church legislation on Sacred music and drew some conclusions. Some of my friends were angry we used the term “Disney” to describe certain liturgical music. Others thought we were kidding. However, I stand behind that term, because technical descriptions like “modal” and “rhythmically free” mean nothing to the vast majority of Catholics who lack professional training in music.

PLEASE, DON’T LEAVE ANY NASTY COMMENTS saying I am “anti-Schutte” or anything like that. I have absolutely nothing against Schutte, who is incredibly accomplished 2 and literally world-famous. He’s free to write whatever he wishes and folks are free to purchase it.

However, I do object to certain would-be “scholarly” publications treating this music in a serious fashion, using the most outlandish psychobabble. 3 Sometimes I’m tempted to scream: “How can such things be written about a tune lifted from My Little Pony?” Just a decade ago, I believed Musicology symposia had a monopoly on this kind of gibberish — I was wrong!...

2   Dan Schutte (b. 1947) is best known for composing the hymn “Here I Am, Lord.” He has received three honorary doctoral degrees, numerous Grammy nominations, and many other awards. He is considered one of the most influential living composers of “contemporary” Catholic liturgical music…


Ostrowski is on the right track, as his sensus Catholicus is screaming something is wrong. However, the previous post demonstrates the tragic problem a lot of “conservative” Catholics have in dealing with such nonsense.

First, poor Jeff is actually trying to demonstrate to the conciliar hordes that the music of Dan Schutte is inappropriate for Mass by using a decree of John Paul II. This is his first mistake. For no post-Conciliar decree from any post-Conciliar pope has ever successfully stopped any Novus Ordo liturgical abuse. Why? First of all, because these decrees are horribly ambiguous. Take the words from JPII quoted above:

Blessed John Paul II decreed that Church music must “avoid any concessions to frivolity or superficiality.” He went on to remind us of many other important things. For instance, he said neither vocal nor instrumental music can be used at Mass if it “does not possess a sense of prayer, dignity and beauty.”

So if I’m Dan Schutte, or one of his “fans”, I simply argue that his music is not frivolous or superficial and that it certainly does possess a sense of prayer dignity and beauty. Game over for poor Mr. Ostrowski! He can then either concede defeat or else proceed to embark on a pointless debate trying to “prove” to me that the music garbage Dan Schutte puts out is indeed frivolous and superficial.

In order for Mr. Ostrowski to win his argument with the Schutte fans he must be able to appeal to some authoritative decision by Rome which specifically and unambiguously condemns and forbids the type of music Dan Schutte puts out. But no such decision has ever been issued by Rome. Instead what we get are decrees which Neo-Catholic apologists interpret to forbid such music. Then the liberals proceed to ignore such neo-Catholic interpretations and go on infecting a majority of Novus Ordo Masses with their music.

Second, not only is there no clarity in these decrees, there are zero consequences for offenders. After all, who are faithful Catholics going to go to in their dioceses to “enforce” these ambiguous papal decrees on liturgical music? Their bishops? As of today I know not one single bishop in the United States who has ever restricted the musical tripe of Schutte and others from being played in his diocese. Even the so-called “conservative” bishops seem perfectly content to give liturgical license to the worst innovators. For if the charismatic movement is officially “approved” by the Conciliar Church, with their loud rock-music Masses, how can any bishop forbid any type liturgical music?

Mr. Ostrowski’s next mistake is giving entirely too much deference to deluded “Catholics” who object to him describing such music as “Disney” (that is an extremely mild adjective in my opinion) and accuse him of being “anti-Schutte.” Ostrowski then goes to great lengths to prove he is not anti-Schutte, and then actually praises Schutte as “incredibly accomplished.”

Seriously? What Mr. Ostrowski needs to realize is that he (and all of us) must necessarily be “anti-Schutte” in order to remain Catholic. Every single Catholic must rail against the desacralization and eroding of the Faith his horrendous songs engender.

Most importantly, however, Mr. Ostrowski needs to recognize that the self-absorbed and sacrilegious liturgical music found in a vast majority of Novus Ordo Masses is just a symptom of a larger disease. This is what our “conservative” brothers have yet to see. For every part of the revolution in the Church is interrelated. The man-focused and banal liturgical music Ostrowski condemns is simply a natural result of a man-centered liturgy where the priest faces the people, the tabernacle is off to the side or absent, congregants glad hand each other during the “sign of peace”, numerous congregants wear immodest and inappropriate clothing, and participants handle Our Blessed Lord with their hands with no more reverence than eating a potato chip.

And the man-centered liturgy itself is nothing more than a result of a man-centered theology worked into the Second Council through various contradictions and ambiguities which were later exploited by the very same people who put them there. Until our “conservative” friends can begin to connect the dots they will forever be trapped in a Conciliar Twilight Zone where arguing with “Catholics” over the merits of using “My Little Pony” as liturgical music (and trying not to offend them in the process) is considered an acceptable and worthwhile pursuit. This is losing game my friend. The only way to win is not to play.

In conclusion, please pray for Mr. Ostrowski and other conservative Catholics who have the sensus Catholicus. Pray that God may lift the veil from their eyes and give them the grace they need to recognize and resist the true causes of the pernicious symptoms in modern liturgical music they rightly recognize as offensive to God.


Published in Fetzen Fliegen
back to top
Last modified on Wednesday, December 10, 2014
Tweet