Christmas at the Front: December 23, 1943 Featured 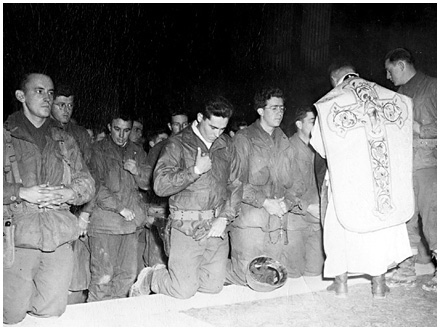 During World War II, all practicing Catholic GIs were traditional Catholics. All Masses offered on Christmas 'in the trenches' were Traditional Latin Masses. All chaplains were 'rad trads'. Makes you wonder--doesn't it?--are we sure the Catholic Church has been moving in the right direction these past fifty years?

Editor’s Note: In our continued quest for gold buried away in the archives of The Remnant and The Wanderer, I came across this one. It appeared in The Wanderer when my father was oversees fighting in the European theater of World War II. It’s unsigned, and it touched me somehow…as I hope it will touch you. MJM

Big guns wheel into position. Maps are scanned. Objectives marked. The fortress Europe will be hammered from every side; death and desolation will hit the cities of the continent with planned precision against a timetable of terror, unparalleled in the history of man.


In this blackest hour, there will be born again a King who never wore a royal robe, save once, who never wielded sword or shield, or rode away to war; but still His name will flash across the battle fields on every front and commandeer the night on Christmas Eve.

It is heartening to know that history’s darkest hour can still admit the light which streams from Bethlehem. There will be millions of fighting men who will pause beside their great machines of death and look, with wistful hearts, across the wastes which lead to Christ.

It is sad enough, these boys away from home, facing a dark unknown whereas in peace they could have sat about the blazing hearth, or made their way along the glancing snow to church, or gathered ‘round the tree in gratitude, in mirth, in song, in friendliness.

No doubt this thought plays back and forth in every lad away from home this day. Perhaps it troubles up a tear, perhaps a prayer that the frightful plague of death will soon be passed.

And it makes his fight a greater fight because of this. It makes the reason of his sacrifice more clear. The things he misses cannot return unless he wins the right to know and love them once again.

This war does not now fall into a pattern of policy or politics or push for power. It has resolved itself into a desperate struggle to survive. It is idle to argue what conspiracy of events dragged us into the most tragic war in history. It only serves to cloud the valor of the men who stand with heads unbowed, who knew that they must fight until the end, that we and all the things we love might live.

So Christmas comes with all these thoughts in mind. We wonder what to do, how to show our thanks, how to strike a shade from the loneliness they feel. A stalwart, somewhere in the far Pacific, wrote his sweetheart a request: “I’ll receive Communion at midnight Mass for you. Please do the same for me. It will make me feel so close to home.”

It seems the perfect clue to a happy Christmas, despite the vacant chairs and the heavy memories of days gone by. Christ can supply the common ground to draw all hearts together. His Body and Blood will find its way into Arctic wastes, the jungle trails, the burning desert sands, the deadly seas and sky and into the peaceful altars of our land, and make us one.

[Comment Guidelines - Click to view]
The Remnant values the comments and input of our visitors. It’s no secret, however, that trolls exist, and trolls can do a lot of damage to a brand. Therefore, our comments are heavily monitored 24/7 by Remnant moderators around the country.  They have been instructed to remove demeaning, hostile, needlessly combative, racist, Christophobic comments, and streams not related to the storyline. Multiple comments from one person under a story are also discouraged. Capitalized sentences or comments will be removed (Internet shouting).
The Remnant comments sections are not designed for frequent personal blogging, on-going debates or theological or other disputes between commenters. Please understand that we pay our writers to defend The Remnant’s editorial positions. We thus acknowledge no moral obligation whatsoever to allow anyone and everyone to try to undermine our editorial policy and create a general nuisance on our website.  Therefore, Remnant moderators reserve the right to edit or remove comments, and comments do not necessarily represent the views of The Remnant.
back to top
Last modified on Saturday, December 24, 2016
Tweet

More in this category: « A Scary Merry Christmas: Francis Lectures Roman Curia On Mothers and Kings: A Christmas Message »