On Mothers and Kings: A Christmas Message 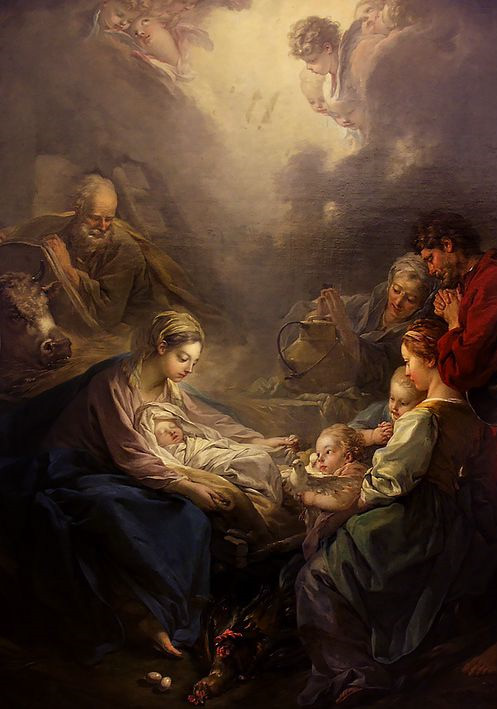 As I write this little greeting to friends and allies around the world at Christmastime, I must confess to a growing sense of unease at the thought of ghosts of Christmases yet to come. Even the joy of the Holy Feast cannot completely eclipse the hard realities of our weary world at war with everything true, good and beautiful.

This would-be new world order of ours has taken on all the trappings of a global refugee camp where families are broken and separated, children are orphaned and aborted, and the desperate sadness of the homeless is everywhere in evidence. Broken and burning, the world seems to be waiting for a messiah of its own creation to save it from itself, having long since lost interest in the real One.

I don’t fear the future for myself anymore. For one thing, he’s much smaller than he used to be. But I turned fifty this year, and have become increasingly aware of the years piling up behind me, far outnumbering those still to come. It’s almost amusing, in fact, getting older, as age has a way of reinforcing the reality of Adam's fall, regardless of our effort to ingore its effects. With nothing left to prove, one begins to take comfort in the diminished number of challenges that come at the summit, as he shuffles along and tries not to fall off. So it’s not for myself that I fear, but for my children and for all children who may live to see a kind of hell on earth.

For me, “time is a gentleman” as the Italians say, bringing with him the pleasant surprises of the next stage as life moves along. I’ll be up late tomorrow night, for example, waiting for our two eldest children to come home from college for Christmas break, driving 12 hours through snow and subzero temperatures. I’m so eager to see them, though I still can’t quite figure out how these “kids” will manage without me.

Our youngest son is five years old now, and seems to gain an inch every hour, as if to remind us all that it won't be long before he too will be heading off. Our happy home is filled less with the sounds of little ones playing house and more with those of home-schooled youngsters, working hard on growing up. I call them “our replacements”, for soon enough they’ll take over, and we’ll retire into back seats and overstuffed chairs, bespectacled and gray, looking on from a place a bit farther away, but comfortably resigning ourselves to let them take the wheel.

I’m an 'orphan' for the first time this Christmas, too, my mother of such happy memory having gone to her eternal reward January last. But her passing, aside from leaving a gaping hole in our lives, also served as an important reminder that “we’re next”— that we’ve reached the platform and that ours is the next generation to board the train.  Time is moving on and Death is not quite as remote as he once seemed.

Even as the back goes out more than I do, there is consolation in the awareness of the children running alongside now, making their own way, putting the things of the child aside and growing into capable soldiers of Christ in their own right. I lean on them more now, and am thankful for their shoulders even if they’re too big to ride on mine anymore.

People like to ask: What’s the secret to a happy life? The answer? Children…lots of them. The horror of abortion and contraception is decidedly more pronounced at this time of year, especially when recalling all those broken, aborted and divorced families here in our age of ‘progress’. What a waste! So much happiness washed away by the tsunami of the tears that results from turning against the source of all happiness—God and family.

When I think of so many mothers killing their sons every day, I thank God for my own mother and the unselfish blessing that she was. She never had two nickels to rub together, and yet she bitterly lamented the three miscarriages she had, which would have made her the proud mother of twelve, rather than nine.

Outnumbered and overworked, she was the one about which everything good and stable revolved. It was her words that disciplined, to be sure, but it was also her arms that embraced, her voice that consoled, her approval that was needed, her love that mattered, and her tears that caused the most anguish.

Christmas morning. What a flood of memories that evokes. Mother in her housedress waging a kind of happy battle against time and deadlines, with clanging pots and pans her weapons, stubborn turkeys and hot stoves her adversaries…always moving, never standing still, dusted with flour -- it was happy maternity versus the baron specter of ugly modernity.

Christmas was her time. Advancing with spatula in hand, moving the troops and preparing the way for the birthday of the King. Tables were set, napkins folded, glasses filled, small children admonished, larger ones ordered into action, and lucky little boys sometimes overlooked in all the happy hubbub. Everything she did was everything that mattered.

In contrast, Christmas Eve the night before had seen nine children kneeling before the manger in the old living room. It was quiet, except for the sound of Mother’s voice calling to mind deceased relatives for which we would pray, relating again the story of the First Christmas, and softly prompting Father to tell the old stories about who we are and whence we come. She was teaching—always teaching—but never forgetting that children need to be loved and nurtured, protected and made to laugh. With all her heart, she believed that children can have fun and love God all at the same time.

Then there were the gifts, all carefully chosen over the course of the preceding year. We didn’t have any money, but she bargained with every dime-store clerk in the county to give her children gifts that left their jaws on the floor. And what she couldn’t buy for them, she made.

Then it was up again! An army on the move, the general at the helm—Midnight Mass waits for no man. Hair brushed, ties tied, toys stowed, chapel veils passed out and it was off to church over a frozen tundra in the old station wagon, not to return home again until the early morning hours of Christmas Day. Mother and God were working things out, teaming up to make Christ’s birth the biggest day of the year.

A long time ago—seems like another life, in fact. And now it’s our time, our turn, our responsibility to try to repeat the performance, to keep Christ in Christmas and to make it just as holy and happy for our children as she made it for hers.

It may be a cliché, but that doesn’t make it any less true: Life’s a funny thing—the more it changes, the more it stays the same. We’re all just understudies, preparing to assume the bigger roles as the acts play out. Getting older, feeling uncertain, losing, loving, baptizing, burying and gaining anew—it’s all part of the drama. And in the end, whether we’re young or not so young, the central Character never changes. Always the same, He plays Himself and is surrounded by the familiar extras—shepherds and kings, sheep and angels—reaching out, beckoning, encouraging all who see to never forget, to never doubt that He is the Star and the reason for it all.

The world of commerce and politics no more recognizes Him today than it did two thousand years ago, and yet millions of “little people”—half the world, in fact—stop what they’re doing every year to celebrate His birth.

What a privilege it is to call Him King... and to follow Him.

Let’s think about that happy reality this Christmas, and not the advancing years or the troubles or the tears. He is Who He said He was—of that we can be sure. He was born to a virgin in a stable in Bethlehem. He lived, loved and died on this stage—no serious historian questions this. And He is still Emmanuel—God with us—just as He was when John the Baptist was a child, when Charlemagne reigned in holy Christendom, and when we were kids. And He will be with us still, when we’re too old to remember.

[Comment Guidelines - Click to view]
The Remnant values the comments and input of our visitors. It’s no secret, however, that trolls exist, and trolls can do a lot of damage to a brand. Therefore, our comments are heavily monitored 24/7 by Remnant moderators around the country.  They have been instructed to remove demeaning, hostile, needlessly combative, racist, Christophobic comments, and streams not related to the storyline. Multiple comments from one person under a story are also discouraged. Capitalized sentences or comments will be removed (Internet shouting).
The Remnant comments sections are not designed for frequent personal blogging, on-going debates or theological or other disputes between commenters. Please understand that we pay our writers to defend The Remnant’s editorial positions. We thus acknowledge no moral obligation whatsoever to allow anyone and everyone to try to undermine our editorial policy and create a general nuisance on our website.  Therefore, Remnant moderators reserve the right to edit or remove comments, and comments do not necessarily represent the views of The Remnant.
back to top
Last modified on Monday, January 2, 2017
Tweet

More in this category: « Christmas at the Front: December 23, 1943 Papal Chess: King vs. Bishop and Knights…of Malta »