Written by  Christopher A. Ferrara
Rate this item
(1 Vote)

Six months before the Iraq war began, The Remnant was warning that there were no “weapons of mass destruction,” that the pretext for war was a patent fraud, and that the invasion of Iraq would be a debacle of massive proportions.  Right on every count.  And yet The Remnant suffered the loss of hundreds of subscribers—“super patriots” as the Editor rightly called them—who were enraged that this newspaper would not “support our troops.”  In fact, the best way to support our troops was to demand that they not be sent to suffer and die in that jingoistic folly.

Five thousand American soldiers lost their lives in Iraq, and many thousands more suffered crippling physical or psychological wounds, or both, from which they will never recover. The irreparable damage to them and their families will reverberate down through the generations.

And for what?  Today, Iraq is in the hands of a radical Shiite Muslim government friendly to Iran.  As Iraqi Prime Minister Nouri al-Maliki recently declared, Iraq and Iran enjoy  “a ‘friendly’ and ‘brotherly’ relationship that he and the Iranian leadership hope to continue. Iran is one of four countries listed as a ‘state sponsor of terrorism’ by the U.S. State Department…. ‘The Republic of Iraq and the Islamic Republic of Iran, as two Muslim countries and with rich cultural and historical background, have friendly and brotherly relationships,’” said al-Maliki.

Since “Operation Iraqi Freedom” ended, Iraqi Christians have been murdered or driven from the country by Muslim fanatics.  In 2010, “reports emerged in Mosul of people being stopped in the streets, asked for their identity cards, and shot if they had a first or last name indicatingAssyrianorChristianorigin.” Since 2003 upwards of 70% of Iraq’s Christian population has fled the country, reducing the Christian population “from 850,000 pre-war to 250,000 today.” Of the approximately 300 church buildings that existed before the Iraq invasion, only 57 remain.

And, as the whole world knows, in October of 2010 an Al-Qaeda affiliate group bombed Our Lady of Salvation Cathedral in Baghdad, killing 58 Catholics.  In fact, precisely as the result of America’s insane invasion of Iraq, Al-Qaeda has established an Iraqi beachhead that never existed before “Operation Iraqi Freedom.”

And now the Republicrat Uniparty is clamoring for a new war with Syria.  The aim of this pointless exercise is to “punish” Syria because President al-Assad—with whom the war-mongering Uniparty leader, John Kerry, our laughable “Secretary of State,” once enjoyed dinners and drinks—allegedly authorized deployment of chemical weapons, causing some 1,300 civilian deaths.  Only America, you see, can cause civilian deaths in Arab nations by bombing them back into the Stone Age with proper bombs, not improper chemical weapons. Thus a mere 100,000 civilians were killed—properly killed—during the American invasion. The right way to kill people is to bomb them or rip them to pieces with 30 mm canons fired from Apache helicopters, as America did to some Reuters journalists who appeared to be carrying something that could be a weapon. Bradley Manning’s leak of that video to Wikileaks will cost him most of the rest of his life in jail.

The idea for this latest war is to drop a few bombs, launch a few cruise missiles, destroy a few buildings, kill a few people, and then declare that we have sufficiently punished Syria and al-Assad for using the wrong type of weapon in a civil war that had already claimed 100,000 lives while America did nothing.  This will prove America’s “resolve” never to allow killing by improper weapons to go unpunished.  Al-Assad must learn to kill with proper weapons if this civil war is to continue.

Now, the Syrian “rebels” seeking to overthrow the Assad government are clamoring for this war in the hope that it will aid their attempt to gain power. But at the core of the rebel uprising are—wouldn’t you know it?—Al-Qaeda fighters.  As CNNreports:

Al Qaeda’s affiliate in Syria, Jabhat al-Nusra, is generally acknowledged to be the most effective force fighting al-Assad. Its fighters are willing to sacrifice themselves for the cause, are widely viewed as uncorrupt and are not involved in looting as other opposition forces are. A number of them are battle-hardened from other conflicts such as the Iraq War.  Al Qaeda's Syrian affiliate is also well supplied as it benefits from the support of Sunni ultra-fundamentalists in the wealthy Gulf states such as Qatar and Saudi Arabia.

Follow this carefully:  the Uniparty now proposes to attack Syria, to the benefit of Al Qaeda rebels linked to Sunni fundamentalists, after we invaded Iraq to overthrow a Sunni government and ostensibly to oppose Al Qaeda, which was not even there.

The result, of course, will be the same result that seems always to follow US military intervention in the Middle East: the persecution, killing, and dislocation of Christians. As one retired Army colonel, Lt. Col. Robert L. Maginnis, now a national security advisor, observed:

“Former dictator Saddam Hussein protected Christians but once Saddam was replaced the American-installed Shiite government sat back while Christians were run out of the country… Today Iraqi Christians are living in Jordan and Turkey, meanwhile, the few Christians left in Iraq live in fear of Islamist attacks…”

Maginnis also told CP that he expected “a similar outcome in Syria” given the direction of the current civil war.  “That country under Assad has been diverse but since the civil war sectarian tension has increased and many Christians fled to Jordan and Turkey,” said Maginnis, who is a senior analyst with the U.S. Army. “Should Islamists take over Syria, with or without American help, Christians will face increased persecution and thus will flee in greater numbers."

Quite understandably, American military personnel have gone public (under disguise) to oppose this madness and even to suggest that it constitutes a treasonable undermining of what America was supposed to have accomplished in Iraq.  One picture will replace a thousand words: 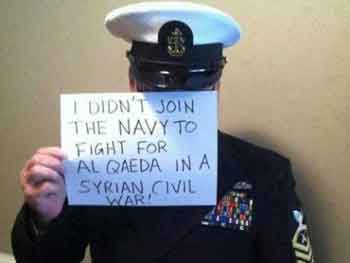 Remnant readers know that I have had some very serious public disagreements with Tom Woods on issues related to Catholic social teaching the Popes have insisted is binding on the Catholic conscience. But no one can improve on Woods’s description of the insanity at work in this latest eruption of American war-mongering. It is worth quoting in full:

Awesomest Country Ever About to Embark on More Awesomeness

The neocon headline on Drudge is “US Ready to Follow on Syria.” The idea being that the Awesomest Country Ever should be ready to “lead” on Syria, which means launching another idiotic war with murky consequences, while exploiting people’s love of country to lure them into supporting another fiasco.

The real problem is not “leading” (neoconspeak for irrational bellicosity) or “following,” but the policy of intervention itself, which has been destructive for everyone concerned (American citizens included) except the profiteers.

Ah yes, the profiteers.  That is, the capitalists who have, from the very inception of capitalist social order, profited not only from endless wars but also state favors, privileges and protections at every stage of the building of the “free market” we know and love.  (Lunchables®, anyone?  How about some porn? Or maybe a “safe and legal” abortion?) But this is not the place to re-ignite that debate with the libertarians.  What Woods has written here is exquisitely incisive, and it suggests why Catholics ought to be ready to ally themselves with libertarians in opposition to the sacred modern-nation state, while never forgetting that the only effective remedy to its evils lies in the law of the Gospel, not the text of the Constitution.  On this score I never tire of quoting the words of Alasdair MacIntyre:

The modern nation-state, in whatever guise, is a dangerous and unmanageable institution, presenting itself on the one hand as a bureaucratic supplier of goods and services, which is always about to, but never actually does, give its clients value for money, and on the other as a repository of sacred values, which from time to time invites one to lay down one’s life on its behalf... [I]t is like being asked to die for the telephone company.

So here we stand some ten years after the Uniparty’s Iraq debacle began, on the verge of another senseless war in the long history of senseless wars that coincides with the emergence of what the moderns have the audacity to call Liberty, the idol whose origin and “progress” I trace in Liberty, the God that Failed.   What do we do?  We pray and fast, as Pope Francis has asked of us, and we implore Our Lady of Fatima to intercede for us by bringing about, at long last, the Consecration of Russia to Her Immaculate Heart in order effect in a miraculous manner the conversion of that poor nation and peace in the world.

It is no happenstance that a resurgent military power in a yet-to-be-converted Russia figures prominently in the precarious balance of powers now centered on the little nation of Syria. Events in little nations provoked the two Great Wars of the 20th century.  Pray that we do not witness the next Great War on account of our government’s uncontainable hubris and delusions of grandeur, which are driving its politicians toward yet another epochal blunder—perhaps the biggest of all.

Today the super patriots who abandoned The Remnant are conspicuously silent.  They have been for quite some time. And well they should be.

Published in Remnant Articles
back to top
Last modified on Friday, September 6, 2013
Tweet

More in this category: « What About those Six Protestants and the New Mass? Heart, Give Me Thy Son: A Story of Vocation »