Written by  Christopher A. Ferrara
Rate this item
(40 votes) 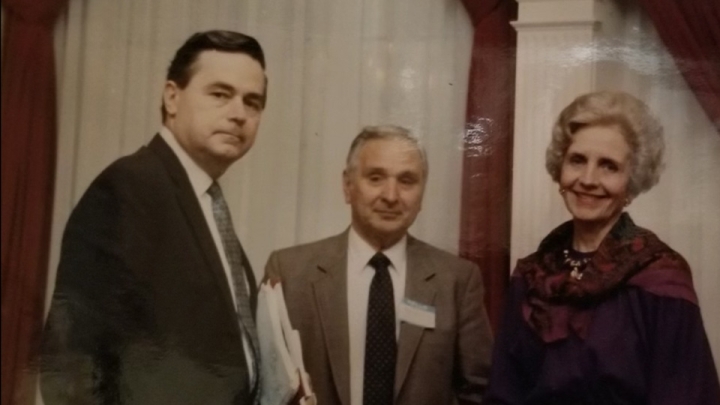 Editor’s Note: I've been an admirer of Mr. Howard Walsh all of my life. He was both friend and ally to my late father, Walter Matt, and his Keep the Faith apostolate was a lifeline for traditional Catholics over the course of the past four decades. He was a very close friend to Michael Davies, as well, and was the publisher of The Latin Mass Magazine. A warrior for the Latin Mass, Mr. Walsh was a gentleman of the old school who probably did more in the early days to raise the profile of the movement worldwide than anyone else -- always from behind the scenes, of course. But if you attend the Latin Mass today, one of the men to thank for that privilege is Howard Walsh. The Latin Mass movement has lost a champion and one of its greatest pioneers. He leaves behind a raft of children and grandchildren so, in your charity, please remember the entire Walsh family as you pray for the repose of the soul of the late, great Howard Walsh who fought the good fight, finished his course, and kept the faith. Requiescat in pace. Michael J. Matt

On January 19, 2023, at 3:00 AM, on the Feast of St. Marius and Companions, martyrs for the Faith, Howard J. Walsh, the founder of Keep the Faith, ended his earthly journey after a battle with cancer.   Howard had all the helps the Church provides for a holy death, including the Apostolic Blessing, and we can have confidence that the eternal light will shine upon him.

There is no layman on the face of earth who did more to advance the cause of the traditional Catholic faith than Howard.  Howard was not just one of the pioneers of the traditionalist movement that began in the 1970s in response to the ecclesial catastrophe of the “springtime” of Vatican II.  Without any public presence whatsoever, which he consistently shunned, Howard was nothing less than an engine of the entire movement, particularly where it concerned the liturgical restoration that culminated in Summorum Pontificum.

Through Keep the Faith and the Latin Mass magazine, Howard sponsored and promoted virtually all the visible leaders of the movement at conferences, in print, and in every other available medium.  He almost singlehandedly restored to the collective consciousness of the Church the work of Archbishop Fulton J. Sheen, whose weekly television show once captivated millions of Americans, before this nation began its rapid descent into the abyss.  He envisioned and made a reality an online resource that preserves and disseminates throughout the world virtually every aspect of Catholic theology, apologetics, philosophy, history, and social and political commentary.

My own debts to Howard are immeasurable.  I owe this great man everything that made it possible for me to contribute to the cause of the faith in public discourse and in the courts.  His guidance and support of my efforts determined the entire course of my life.  He was a second father to me.

There are very few men of whom one can say that they changed the whole world for the better.  Howard Walsh was one of those chosen few, truly an instrument of divine Providence for the good of humanity. That a man of such immense influence was, by his own insistence, unsung and invisible to the public is only a further testament to his greatness.   Quietly, behind the scenes, and on a massive scale equaled by no one else among the laity, he did what was right in the eyes of the Lord.

When news of his final illness spread among those who knew what Howard had accomplished, the common sentiment was that it would be impossible to imagine a world without him.  But his legacy to the Church lives on and will continue to nourish the faith of millions, including thousands of priests who were led to Tradition along the path that Howard had laid down. There is no human calculation of all the good that Howard has done.

Please pray for the repose of the soul of this selfless defender of the faith, who was as much as father to others as he was to his own devoted family.  But pray in the confidence that he has already entered that eternal realm in which God “shall wipe away all tears from their eyes: and death shall be no more. Nor mourning, nor crying, nor sorrow shall be any more, for the former things are passed away.”

[Comment Guidelines - Click to view]
The Remnant values the comments and input of our visitors. It’s no secret, however, that trolls exist, and trolls can do a lot of damage to a brand. Therefore, our comments are heavily monitored 24/7 by Remnant moderators around the country.  They have been instructed to remove demeaning, hostile, needlessly combative, racist, Christophobic comments, and streams not related to the storyline. Multiple comments from one person under a story are also discouraged. Capitalized sentences or comments will be removed (Internet shouting).
The Remnant comments sections are not designed for frequent personal blogging, on-going debates or theological or other disputes between commenters. Please understand that we pay our writers to defend The Remnant’s editorial positions. We thus acknowledge no moral obligation whatsoever to allow anyone and everyone to try to undermine our editorial policy and create a general nuisance on our website.  Therefore, Remnant moderators reserve the right to edit or remove comments, and comments do not necessarily represent the views of The Remnant.
back to top
Last modified on Friday, January 20, 2023
Tweet