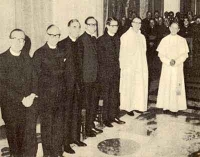 During the second show, Tradition was not well-represented by callers, and – to put it mildly – the hosts made a quick dinner of them. One caller in particular erroneously affirmed that Quo Primum said the Mass could not be changed and the New Mass was invalid because its consecration formula omitted the phrase “Mysterium Fidei”.

In all fairness, the radio show’s hosts ably and correctly replied to this caller’s mistaken statements. But the situation altered dramatically when the caller parlayed their corrections with a spot-on assertion: six Protestants helped to create the Novus Ordo Missae. The hosts replied “this is a myth” and cited a book which supposedly (and “authoritatively”) upheld their position.[1] They went on to state that like at other previous ecumenical councils, there were Protestant observers at the Second Vatican Council, but simply to watch the proceedings and not contribute.

In fact, this is a situation in which the proof (Protestantism) can be undeniably found in the pudding. But before addressing the “myth” about the New Mass’ fabrication, one point concerning ecumenical councils needs to be made – as in fact, it set the stage for the Consilium’s liturgical revolution.

Protestants were for example invited to the First Vatican Council (1868-1870), but this was in the authentic spirit of ecumenism – in an attempt to effect their conversion to the One, True, Holy and Apostolic Faith. Not however to advocate their heresies or errors as acceptable treatises. During Vatican II though, the liberal Council Fathers enabled the Protestant observers’ ideas to be introduced within the conciliar texts. This is an indisputable fact of which ample evidence can be found in the aforementioned titles – and which has been boasted about by Catholics[2] and Protestants alike.[3]

Sneak Peek: This article is scheduled to appear in the next print edition of The Remnant newspaper. Unlike this one, most Remnant articles never appear on this website.  Click here to find out how you can become a subscriber.

Returning to the “myth” that Protestant observers did not contribute in creating the New Mass, to hold this position is to deny the obvious – not only in fact, but also in substance. In the first place, an ecumenical liturgy that would no longer offend Protestants was Fr. Annibale Bugnini’s intention from the get-go as he declared in 1965:

While we learn from the close confidant of Pope Paul VI, Jean Guitton:

The intention of Pope Paul VI with regard to what is commonly called the Mass, was to reform the Catholic Liturgy in such a way that it should almost coincide with the Protestant liturgy. There was with Pope Paul VI an ecumenical intention to remove, or, at least to correct, or, at least to relax, what was too Catholic in the traditional sense in the Mass and, I repeat, to get the Catholic Mass closer to the Calvinist mass” [my emphasis][4].

To accomplish this ecumenical goal, the Consilium enlisted the help of these Protestant observers:

Their contribution in creating the New Mass was immortalized in a picture taken of them during an audience with Pope Paul VI after thanking them for their assistance. The image was subsequently published in L’Osservatore Romano on April 23, 1970 with the title: “Commission Holds Final Meeting, Pope Commends Work of Consilium”.

In addition to the self-evidence of this photograph, we also have verifying testimony from several persons, the most well-known being the aforementioned Anglican Jaspar, who described to Michael Davies how the Protestant contributors gave their input, often implemented verbatim.

But let’s pretend this picture does not exist, nor any credible testimonies from Protestants who were actually there. Even without these we still have more than sufficient evidence of Proof Protestant in the Pudding: in the texts of the Novus Ordo Missae itself.

For example, the Ottaviani Intervention clearly shows that the New Mass does not conform to the doctrines as infallibly defined by the Council of Trent – that is, the very Catholic beliefs about the Mass, the Blessed Sacrament and priesthood which Protestants reject.

But the most telling pudding proof comes from the Protestants themselves, who affirmed (in reference to the official edition and not merely a bad implementation of it), that they too could use Pope Paul’s new missal since the objectionable content such as “a false perspective of sacrifice offered to God” has been “abandoned” in “the new Eucharistic Prayers”.[6] Or that “...nothing in the renewed Catholic Mass need really trouble the Evangelical Protestant”.[7] Many more such testimonies exist, but space is fleeting here – so cf. Michael Davies again!

Even more significant were their actions. After declaring the doctrinal suitability of the Novus Ordo Missae, Episcopalians and Lutherans adopted its texts nearly verbatim. Obviously this indicates “a fundamental change of doctrine”,[8] because they were unwilling to do this with the undeniably orthodox texts of the 1962 Missale Romanum.

Time and again, we find “conservatives” denying these indisputable facts concerning the theological deficiencies of the Novus Ordo. While I could conclude with a quote from Archbishop Lefebvre wherein he affirms that the New Mass, even when said with piety is nevertheless impregnated with a Protestant spirit – I won’t. Rather, I will give the words of a post-conciliar French liturgist, Fr. Henri Denis, who at least had the intellectual honesty to say:

To claim that everything has changed is quite simply to be honest about what has happened. In some of the debates with traditionalists it has sometimes become the accepted practice to say that nothing has been changed. It would be better far to have the courage to admit that the Church has made important modifications and that she had good reason to do so. Why not acknowledge that religion has changed…?”[9]

Of course, the Catholic Church is Christ and thus cannot change her doctrine given to her by the Divine Word – but wayward churchmen certainly can try, while claiming it's a Church teaching, and when this occurs we must remember the Spanish proverb: Obedience is the servant of Faith, not Faith of obedience; or as St. Peter put it: “we must obey God before men.” This is the essence of the struggle that Catholics find themselves in today: obey what the Church has handed down (Tradition) or adhere to the errors of men (Modernism).

1 The book cited was The Pope, the Council, and the Mass: Answers to Questions the Traditionalists Have Asked by James Likoudis and Kenneth Whitehead. Sufficient time does not exist here to refute the fallacies related to our topic, let alone the entire book, a neo-conservative masterpiece.

2 And in L’Osservatore Romano no less!

3 Cf. chapter IX in Davies’ Pope John’s Council, and furthermore the 2001 conference given by Fr. Franz Schmidberger which revealed that the source of Lumen Gentium’s ecumenical phrase of “subsist in” was actually from a Protestant observer.

5 Note, he has been mistakenly listed as “Dr. Smith” in some publications; the correct list of names can be found in Michael Davis’ works.

6 Jean Guitton quoting a Protestant publication in the December 10, 1969 issue of La Croix.

7 As quoted from M.G. Siegvalt (Protestant professor of dogmatic theology) in La Croix on November 22, 1969.

8 As asserted by Cardinal Alfons Stickler in November 2004, in support of the Ottaviani Intervention.

Published in Remnant Articles
back to top
Last modified on Saturday, October 26, 2013
Tweet

The Remnant is currently supported by dozens of Catholic freelance writers.

More in this category: « A Woman's Right to Choose? Whither the Super Patriots? »