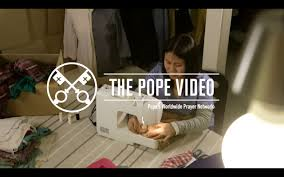 The irony here is rich. The Modernist heroes of Pope Francis crushed the old Catholic model of motherhood, toppled the thrones on which powerful women ruled over Christendom, declared war on true feminity, even forced wives and mothers to dress like their husbands and fathers.

They exiled the mothers from their own homes, sexualized the daughters, made fops of the men, emasculated the priesthood, homosexulized the Mass. And now that everything is destroyed, here they come on their white horses. Did you ever think you’d live to see the day when popes would become champions of Steinem, Fonda and Friedan?

Never mind that the message is so sickeningly politically correct nobody cares. They can get this kind of thing on CNN every night and The View every afternoon:

If Pope Francis really wants to do something for women, he should denounce the very idea that divorced and remarried Catholics--public adulterers who have abandoned their wives!--can return to the sacramental life of the Church.  He should hold high the model of the Virgin Mary, Queen of heaven and earth. He should consecrate Russia to her Immaculate Heart. He should advocate for the safe return of wives and mothers to the exalted pedestals Christendom built for them a thousand years ago (so despised by the modern feminists). He should turn away from the fanatical Modernist ideology that is destroying the Church, undermining the family, eradicating Christian marriage and leaving women vulnerable to a vicious world where morality is no more, marriage contracts mean nothing, sex means everything and women are left to fend for themselves without children, husband, or God. And this wretched condition they would call emancipation?

Here is an example of what we've lost--images of the last Catholic queen of the old Holy Roman Empire. Empress Zita was the model of the powerful Christian woman, wife and mother.  She represents everything the Modernists hate, and no cheesy video from the new & improved Church of Vatican II can change that. Note the dress, the dominant femininity, the grace, the humility, the awesome maternity, the importance placed on God and family, women as women, men as men, so much beauty, truth and goodness--all gone with the wind of a crushing and unyielding Modernism:

By the way, it looks like the Pope's pectoral cross is once again covered up throughout his entire video. I wonder why...

[Comment Guidelines - Click to view]
The Remnant values the comments and input of our visitors. It’s no secret, however, that trolls exist, and trolls can do a lot of damage to a brand. Therefore, our comments are heavily monitored 24/7 by Remnant moderators around the country.  They have been instructed to remove demeaning, hostile, needlessly combative, racist, Christophobic comments, and streams not related to the storyline. Multiple comments from one person under a story are also discouraged. Capitalized sentences or comments will be removed (Internet shouting).
The Remnant comments sections are not designed for frequent personal blogging, on-going debates or theological or other disputes between commenters. Please understand that we pay our writers to defend The Remnant’s editorial positions. We thus acknowledge no moral obligation whatsoever to allow anyone and everyone to try to undermine our editorial policy and create a general nuisance on our website.  Therefore, Remnant moderators reserve the right to edit or remove comments, and comments do not necessarily represent the views of The Remnant.
back to top
Last modified on Thursday, May 5, 2016
Tweet

More in this category: « The Tartuffe Papacy: Or How I learned to love Pope Francis Pope's Forte: Spilling the Beans »