The Tartuffe Papacy: Or How I learned to love Pope Francis Featured 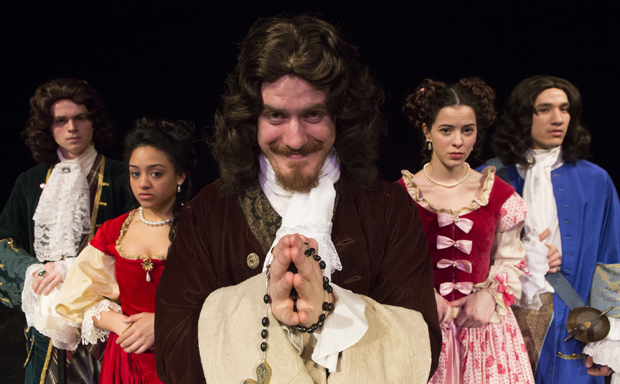 Despite its weakness and the qualifications that accompanied it, the criticism by Raymond Arroyo on the

There are two possibilities. The first is that Pope Francis is an agent of the Judeo-Masonic-Communist-Reptilian conspiracy, and he is craftily advancing the agenda of globalist occultists who worship 30ft owls at resorts in California and hold secret meetings at hotels shaped like spaceship pyramids in the Austrian Alps. Certainly, this is a possibility that cannot be ruled out. Pope Francis does have friends in high places, and he does say a lot of things that UNESCO and Bill Gates say. However, I would like to suggest another possibility: like the classic figure of French drama, Tartuffe, Pope Francis actually believes the stuff he says, writes, and does.

In order to uncover the real Francis, we must turn to our library and dust off an old volume of the French dramatist Moliere. Moliere was a consummate satirist whose work reveals, at times, a distinctly Catholic ethos (at other times, Moliere is at best a virtuous pagan). Among Moliere’s most prominent works is Tartuffe, the great exposé of the hypocrisy of some and the credulity of others.

At one point in the play, the title character, Tartuffe, a seemingly pious conman who has swindled his way into the life and pocket book of the credulous Orgon, attempts to seduce Orgon’s wife, Elmire, and admits that all this time he wasn’t actually pretending to be pious; he really believes that his miscreant behavior is sanctioned by God.

In his desperate attempt to win Elmire to his lust, he further creates an ad hoc theology suggesting that sin is only sin if it is uncovered. Tartuffe is then exposed as a fraud as Elmire had her husband Orgon hiding under the table in order to overhear the conversation and to break the spell Tartuffe held over the family. Tartuffe is humiliated and exposed but seeks revenge against Orgon, attempting to deprive Orgon of his property.

Like Tartuffe, Pope Francis is a showman, manipulating Catholics with his at times ostentatious piety and occasionally orthodox statements. He has his squadron of German theologians drag up old heresies to give license to the pestilent modern vices that have eroded our families and countries. But, at the same time, like Tartuffe, Pope Francis is a true believer. He seems to actually believe both the orthodox and heretical statements he makes. He seems to both hold that human life is sacred and that abortion should not be taken so seriously. He seems to believe that there is a struggle between good and the powers of darkness, and het allows himself to be filmed with pagans invoking those same powers of darkness in prayer. However, these are not the only qualities the Holy Father shares with Tartuffe: both have a taste for money, and, for Pope Francis, it is American money in which he interested.

Pope Francis makes orthodox statements because he believes them (and doesn’t believe them!) and because he knows that’s what American Catholics like to hear. And American Catholics (well, some of them) have lots of money. According to a 2012 article in the Economist (basically a hit piece with the intent to drum up support for taxing the Church), the Catholic Church in America may account for 60% of the Church’s wealth, and if the numbers add up, American Catholics may, just may, give 13 billion dollars per annum to the Church. That is a lot of money. Pope Francis, despite his Ford Focus, is a pope who knows about money. He rents out the Sistine Chapel and accepts lots of gifts from wealthy degenerates like the openly gay Apple CEO Tim Cook.

If Pope Francis were to come out in the open and express his heresy loudly and clearly, he may anger a lot of American Catholics and thus would need to make sure Apple’s stock does not drop any further. However, while the Franciscan papacy may be crushingly depressing, we must remember that the story will not end with Pope Francis, and like the play Tartuffe, our drama will have a happy ending.

At the end of Tartuffe, the title character does not get away with his attempted theft: the French king, Louis XIV, comes to settle the dispute over Orgon’s property and rules in favor of Orgon who has learned his lesson not to be too credulous. It is a very apocalyptic scene with deep theological undertones. The king’s justice prevails in the end, just like Christ’s will.

Hopefully, Amoris Laetitia was the last straw for the neo-Catholics; hopefully, we will see an awakening of American Catholics who will vote with their pocketbooks and on their knees and help to bring about a regime change (both of our political and ecclesiastical leadership). We can only hope and pray that the social reign of Christ, the true king, will return; when that time comes, we will be blessed with a holy pope, and we will see justice and true mercy.

[Comment Guidelines - Click to view]
The Remnant values the comments and input of our visitors. It’s no secret, however, that trolls exist, and trolls can do a lot of damage to a brand. Therefore, our comments are heavily monitored 24/7 by Remnant moderators around the country.  They have been instructed to remove demeaning, hostile, needlessly combative, racist, Christophobic comments, and streams not related to the storyline. Multiple comments from one person under a story are also discouraged. Capitalized sentences or comments will be removed (Internet shouting).
The Remnant comments sections are not designed for frequent personal blogging, on-going debates or theological or other disputes between commenters. Please understand that we pay our writers to defend The Remnant’s editorial positions. We thus acknowledge no moral obligation whatsoever to allow anyone and everyone to try to undermine our editorial policy and create a general nuisance on our website.  Therefore, Remnant moderators reserve the right to edit or remove comments, and comments do not necessarily represent the views of The Remnant.
back to top
Last modified on Tuesday, May 3, 2016
Tweet
More in this category: « The Catholic Services Appeal and Similar Frauds Supremely Politically Correct: Pope Francis' May Prayer Intention »