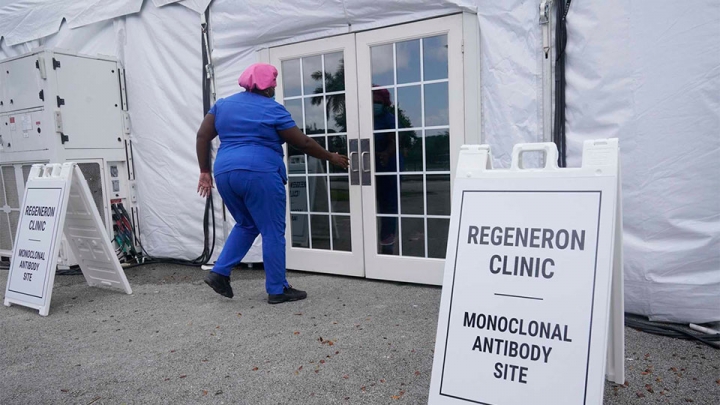 Remnant readers know that the mainstream media lies; so much so, that their editor-in-chief must be the Father of Lies himself. For that matter, it appears that nearly everything “mainstream” these days lies and deceives, to include the medical industry, big pharma and globalist governments. But once in a while the mainstream media actually tells the truth—as does the devil—but usually for some nefarious purpose.

Such was the case back in October of 2020, at a time when President Trump was suffering from the Coronavirus. As part of his treatment and swift recovery, it was revealed that he had been administered monoclonal antibodies as part of his medical regiment. Little was known about this treatment at the time but the mainstream media was swift to jump on this and accuse the pro-life President of being duplicitous.

Headlines across the Nation claimed that monoclonal antibody treatments were developed and/or tested using abortion derived fetal tissue. President Trump had by then stopped all federal funding of fetal tissue research, and that was part of his presidential platform for 2020. The media had their “gotcha moment.”

Monoclonal antibiotic research has depended upon the HEK-293T line of fetal cells developed decades ago.

It now appears that the mainstream media was correct, when they claimed that monoclonal treatments are abortion based. They only acknowledged this publicly, of course, for their own evil agenda, in order to damage the credibility of President Trump. But they were right: monoclonal antibody treatments have been developed and tested using fetal tissue from living babies which were aborted for such a purpose.

But this is not about President Trump. For all we know, he had no knowledge of this at the time. For that matter, and more to the point, neither do many good Catholics know this, who look to this increasingly popular and available treatment for Covid as a moral alternative to abortion tainted vaccines. In reality, both the Covid vaccines and monoclonal treatments were tested and developed through infanticide. In refusing the one, in order to avoid participation in a moral evil, many are unwittingly accepting the other.

Specifically, monoclonal antibiotic research has depended upon the HEK-293T line of fetal cells developed decades ago. I am not a medical expert but my understanding is that the number 293 indicates that there were 292 other children aborted for research until child number 293 was settled upon. One wonders how many more thousands of infants have been aborted and mutilated for medical research.

In addition to its dependency upon aborted children decades ago, more recently the monoclonal line of research has included the use of humanized mice.

But it gets even worse. In addition to its dependency upon aborted children decades ago, more recently the monoclonal line of research has included the use of humanized mice. What is a humanized mouse, you no doubt are wondering? It is a mouse that has been engrafted with something human. Guess what the most popular source of something human is? Organs harvested and tissue taken from aborted children.

Folks, this is a moral madness that goes way beyond what the fictional Dr. Frankenstein attempted. He at least sought to restore life to cadavers that were already dead. These modern real-life Frankenstein’s are breeding babies for the sole purpose of aborting them so that they can skin them alive and harvest their organs while their little hearts are still beating—or more likely pounding—in a frantic attempt to live on.

So, what are we to do? As a pastor of souls as well as an American citizen with the right to freedom of speech and choice, I urge the faithful and all others to reject and refuse any medication that has been derived or developed through the murder of children. This includes any of the currently available Covid vaccines, monoclonal antibody treatments, and oral medications in development that are abortion derived. Having provided nearly 1,000 religious exemption support letters and affidavits and pastoral support to those threatened with the loss of their livelihood or their access to education, I know what can be at stake.

Even beyond the serious moral issue of personal cooperation with evil that is at issue in this matter, there is the additional moral issue of omission, that is, the failure to give personal witness against the monstrous use of aborted children for the purpose of medical research and medications.

Even beyond the serious moral issue of personal cooperation with evil that is at issue in this matter, there is the additional moral issue of omission, that is, the failure to give personal witness against the monstrous use of aborted children for the purpose of medical research and medications. It untenable that only cells derived from murdered infants are viable for medical research. But the very fact that millions of Catholics have knowingly accepted abortion derived products--and have been encouraged or threatened to do so by religious leaders—stands as an implicit endorsement of an immoral practice and an incentive to continue.

Friends, be assured that my intention is not to shame anyone who may have unknowingly accepted some form of abortion tainted medication, to include monoclonal antibodies. Until recently, my assumption was that this was a morally acceptable medical treatment. But now I cannot turn a blind eye to this moral evil. I encourage you to do your own research on this as well, though you will find yourself sifting through lies and obfuscations that are the trademark of everything mainstream. Let me conclude with a web link that may provide a useful starting point and with the prayer that the remnant faithful stand fast in the Faith.

Catch the Latest from Remnant TV — THE GODLESS AGENDA: From Davos to the Vatican

[Comment Guidelines - Click to view]
The Remnant values the comments and input of our visitors. It’s no secret, however, that trolls exist, and trolls can do a lot of damage to a brand. Therefore, our comments are heavily monitored 24/7 by Remnant moderators around the country.  They have been instructed to remove demeaning, hostile, needlessly combative, racist, Christophobic comments, and streams not related to the storyline. Multiple comments from one person under a story are also discouraged. Capitalized sentences or comments will be removed (Internet shouting).
The Remnant comments sections are not designed for frequent personal blogging, on-going debates or theological or other disputes between commenters. Please understand that we pay our writers to defend The Remnant’s editorial positions. We thus acknowledge no moral obligation whatsoever to allow anyone and everyone to try to undermine our editorial policy and create a general nuisance on our website.  Therefore, Remnant moderators reserve the right to edit or remove comments, and comments do not necessarily represent the views of The Remnant.
back to top
Last modified on Friday, January 21, 2022
Tweet
More in this category: « French Traditional Catholics Defy Draconian Lockdown IT'S HAPPENING: 16 high-profile COVID players accused of genocide and crimes against humanity »