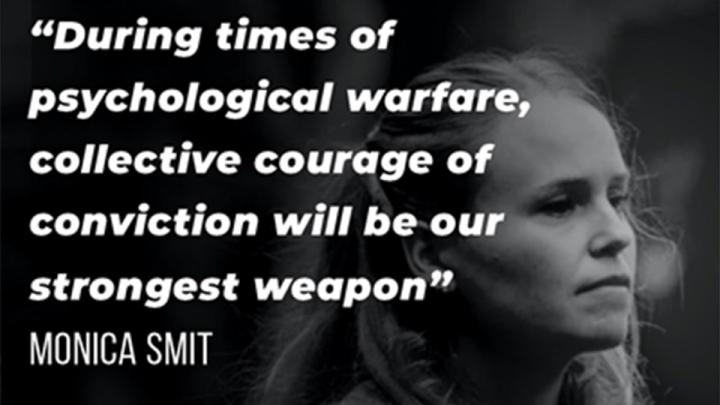 Many thanks to the courageous Monica Smit for agreeing to do this email interview with me for The Remnant.

Monica is an Australian freedom-fighter who was arrested on charges of incitement last month in Melbourne, Victoria. Unable to accept the draconian bail conditions imposed on her by the courts, Monica chose to remain behind bars as a political prisoner. She was released following a successful appeal in the Supreme Court but will return to face her charges in November.

Remnant readers are by now quite familiar with your story, Monica. What other international support have you received over your arrest and detention?

I did see pictures of people holding signs saying ‘free Monica’ in Portugal and Amsterdam, so that shows the reach the story got. It’s hard to know exactly how much, though, as I haven’t had time to look back at all the media. I plan to get involved internationally as much as possible in the coming months, so I guess we’ll find out. Alex Jones and LifeSite News interviewed me recently so I imagine the international exposure will keep growing.

That’s why we’re losing our liberty so quickly…because we have no experience in fighting for it.

Americans are very aware of their rights and freedoms; do you think Australians have taken their freedoms for granted?

Absolutely. My generation hasn’t had to fight for much and Australia is a very safe country with low murder rates and so forth. Australians have lived a very easy-going, free lifestyle for decades and that’s why we’re losing our liberty so quickly…because we have no experience in fighting for it.

Australia doesn’t even have a Bill of Rights and our constitution is not strong enough; for example, we have no protections for free speech. Our legal system does not protect our basic, God-given rights.

We are very friendly and easy-going people, we tend not to let things bother us much…until it’s too late! It’s been very hard to get people to understand the severity of the fight we’re facing right now. Our culture has taught us to let things go and try to avoid conflicts at any cost.

They honestly believe that COVID can suspend all human rights, so there is no way of negotiating with them.

We are also not bred to be patriotic, it’s just never really been that important from what I can remember. Being patriotic is now a far-right characteristic in Australia, which is quite extraordinary.

Monica, when you were arrested, protests were taking place relatively peacefully. You were released from prison into a climate of great unrest, with violence against protesters becoming almost a daily occurrence. How concerned are you about this escalation in violence?

I am extremely concerned. There was a protest on 21st August, just over a week before I got arrested, and that was the first time police used the ‘guns’. I felt so uneasy about it, I went into my local police station to beg and plead with them to change their tactics. I also contacted my police liaison and told her that the Freedom movement is growing every day and that new strategies need to be put in place or someone is going to get killed. I begged her to negotiate with the movement, but there was no point…they honestly believe that COVID can suspend all human rights, so there is no way of negotiating with them.

There are no leaders because if they make themselves known, they will get arrested like I did. The police have no intention of negotiating and that to me, is a huge concern!

Put my words on record…a police officer or protester is going to get killed if things keep escalating the way they are. I have gone out of my way to try and negotiate but they have refused.

As Christians, we know that it is essential to ask for God's help, particularly during these troubled days. What would you say to someone who says that their action or activism isn't necessary as long as they are praying?

Deep down, everyone knows their true strength and abilities. If everyone did what they knew they were capable of, we would not be in this position.

If your state-in-life only allows you to pray, then that is you doing what you can (for example, if you have a family, then obviously, they come first). However, if you can do more, then it is absolutely your duty to do more than pray.

Prayer is necessary, but it is not always enough: we often need action as well.

Remember, actions are prayers too. Every hour I spend fighting for democracy is considered prayer in God’s eyes. I don’t have time to pray for hours and hours per day, but my actions are in God’s name which makes every minute a prayer.

Some people might use the excuse that prayer is enough because they aren’t willing to make more effort, but our Catholic faith clearly teaches that faith and actions are necessary for salvation.

Prayer is necessary, but it is not always enough: we often need action as well.

What's the next step for RDA?

RDA is helping to facilitate shadow economies with businesses, employment, education, communication and community. This is not our preferred way of living but it’s what we must do to empower and unite people who won’t negotiate their God-given rights. We’ll also be heavily involved in political advocacy during the upcoming Australian federal elections.

But our Number One focus is to empower people to tap into their inner strength and have the courage of their convictions.

If you are willing to die for what you believe in, no one can break you.

What's the one take-away from your experiences over the past month that you'd like to leave us with?

When I was alone in that cell, I was completely at peace knowing I had upheld my values. I’ve learnt that when you do the right thing, no matter how painful it is, you will be at peace.
_________

Monica also attached this message she wrote while in jail:

COVID 19 - The ultimate weapon of tyranny

If you question the narrative…you’re a conspiracy theorist.

If you say you think thing’s don’t add up…you’re a conspiracy theorist.

If you share something against the narrative on social media…you’re censored and banned.

If you bring up statistics to prove your theory…you’re listening to the wrong science.

If you don’t wear a mask…you’re alienated and selfish.

If you don’t follow the CHO directions…you’re selfish and killing Grandma.

If you want to travel again…you’re selfish.

If you question the COVID vaccines…you’re anti-vax.

If you want to open your business to feed your family…you’re selfish and unreasonable.

If you complain about lockdowns…you’re an entitled brat and told at least you don’t live in Afghanistan.

If you protest for human rights…you’re scum and it’s your fault we’re in lockdown.

If you have a big platform advocating for freedom, you’re censored and called a conspiracy theorist and anti-vaxxer.

If you manage to find a way around the censorship…YOU GET ARRESTED!

If we keep fighting….we’ll win!

If we trust that good always prevails…it will!

If we find our inner strength…we’ll be unstoppable!

If we don’t let anyone break us…they won’t!

If we stick together…we’re stronger!

If we visualise victory…we’ll have it!

This has been planned for decades. Their objective is to break our minds and souls into submission, we will not let them.

The enemy is clever, no doubt, but they aren’t gods.

We have God on our side and God always wins in the end!

[Comment Guidelines - Click to view]
The Remnant values the comments and input of our visitors. It’s no secret, however, that trolls exist, and trolls can do a lot of damage to a brand. Therefore, our comments are heavily monitored 24/7 by Remnant moderators around the country.  They have been instructed to remove demeaning, hostile, needlessly combative, racist, Christophobic comments, and streams not related to the storyline. Multiple comments from one person under a story are also discouraged. Capitalized sentences or comments will be removed (Internet shouting).
The Remnant comments sections are not designed for frequent personal blogging, on-going debates or theological or other disputes between commenters. Please understand that we pay our writers to defend The Remnant’s editorial positions. We thus acknowledge no moral obligation whatsoever to allow anyone and everyone to try to undermine our editorial policy and create a general nuisance on our website.  Therefore, Remnant moderators reserve the right to edit or remove comments, and comments do not necessarily represent the views of The Remnant.
back to top
Last modified on Tuesday, October 5, 2021
Tweet

More in this category: « A Solution for our Time: Pray for the Police President of Brazil Will Not Allow Vax Pass »