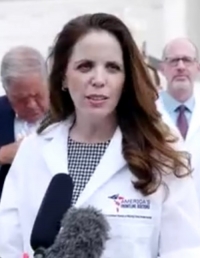 California doctor and the head of America’s Frontline Doctors, Dr. Simone Gold, was arrested Monday in connection with the Jan 6 Capitol debacle.  She is reportedly facing charges of “entering a restricted building or grounds, violent entry and disorderly conduct.”  She is expected to appear in court in Los Angeles on Tuesday.

Gold is an outspoken advocate for the use of hydroxychloroquine to treat the coronavirus, as well as a critic of untested vaccines.

According to her statement, Dr. Gold believed she was acting in good faith when she entered the Capitol, as the doors were opened to her by Capitol police and she remained well within the velvet ropes inside. She claims to have had no knowledge of the violence transpiring elsewhere in the building.

I would ask our readers to pray she is not now prosecuted as a "domestic terrorist."

So what about the Kraken Lady and the rest of the "legal experts", who have since disappeared, by the way, and dropped their court cases?

Exactly what was the point of convincing so many good people that there were realistic expectations of a successful outcome to the legal challenges?

After all their big talk, where are they now? Why are they silent when so many unsuspecting patriots--who thought they were fighting for justice in court...NOT violent insurrection--took them at their word?

I honestly believe Dr. Simone and a lot of other good people were set up, along with, evidently, Donald Trump himself.

Here at The Remnant, I am obliged to point out, we did not in any way support the Jan 6 debacle -- before, during or after the fact.

Please, dear friends, be careful in whom you place your trust. Nothing is as it seems, and Leftist trolls are all around us now.

For the record, here is our tweet from Jan 6, posted in real time as this ridiculous Reichstag fire stunt was unfolding:

[Comment Guidelines - Click to view]
The Remnant values the comments and input of our visitors. It’s no secret, however, that trolls exist, and trolls can do a lot of damage to a brand. Therefore, our comments are heavily monitored 24/7 by Remnant moderators around the country.  They have been instructed to remove demeaning, hostile, needlessly combative, racist, Christophobic comments, and streams not related to the storyline. Multiple comments from one person under a story are also discouraged. Capitalized sentences or comments will be removed (Internet shouting).
The Remnant comments sections are not designed for frequent personal blogging, on-going debates or theological or other disputes between commenters. Please understand that we pay our writers to defend The Remnant’s editorial positions. We thus acknowledge no moral obligation whatsoever to allow anyone and everyone to try to undermine our editorial policy and create a general nuisance on our website.  Therefore, Remnant moderators reserve the right to edit or remove comments, and comments do not necessarily represent the views of The Remnant.
back to top
Last modified on Friday, January 22, 2021
Tweet