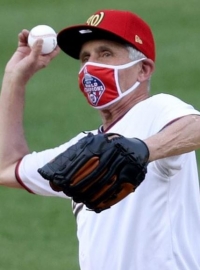 Dr. Anthony Fauci’s Brooklyn stickball days were anything but evident when he threw out the ceremonial first pitch of Major League’s Baseball (MLB) season’s opener between the New York Yankees and Washington Nationals in D.C, proving he doesn’t want anyone catching anything.

Perhaps Fauci thought he was there to throw out the First Amendment.

Maybe, Fauci is all bat and no balls, or as the New York Post put it, his pitch had finally flattened the curve straight into the ground.  The screwball attempt was about as accurate as his advice for immobilizing the COVID pandemic.

If anything, Fauci should be cited for baseball malpractice.

Baseball’s run up to that bamboozled opening toss was equally pathetic.

Two Yankees took a knee during the national anthem and all players of both teams took a knee for the Black Lives Matter (BLM) movement. The Los Angeles Dodgers and San Francisco Giants did the same in a stadium arbitrarily littered with cardboard cutouts of fans.

To his credit, Giants’ pitcher Sam Coonrod was the only player who defied the cancel culture choosing not to kneel.  Coonrod drew upon his Christian faith by resisting BLM’s Marxist creed.  “I meant no ill will by it,” Coonrod stated. “I don’t think I’m better than anyone. I’m a Christian.  I just believe I can’t kneel before anything besides God — Jesus Christ.” 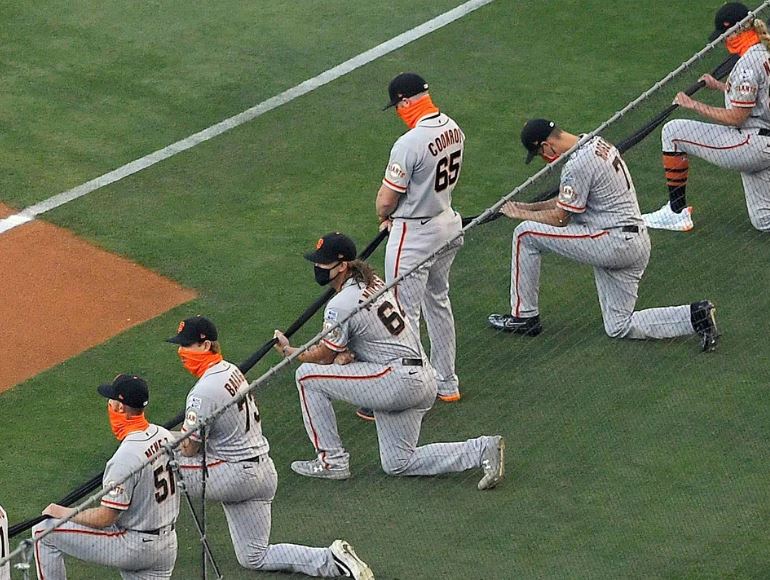 Through Twitter, MLB sanctioned the demonstrations saying such protests “have never been about the military or the flag.  The players and coaches are using their platforms to peacefully protest.”

MLB wants to have it both ways.

When you take a knee, you buy into the leftist mantra that America was racist from its founding and that nothing has changed.

After guerilla warfare, baseball is America’s historic game of origin, but no longer the national pastime. According to the annual Gallup baseball poll, only 9 percent say the game is their favorite sport. That is the lowest figure since Gallup started polling the question back in 1937 with the number consistently dropping.

According to Market Watch between the NFL, NBA and NHL, MLB has the oldest average fan base at 57.  As for any youth movement in the near future – well, forget it.  Only 7 percent of the game’s followers are below age 18, also the lowest among the four.

Such a decline is telling and the reasons are as numerous as the knees who bend to the cancel culture throughout both leagues.

The game’s at bats, pitching changes, commercial time between innings, and overall length are all too long.  Super Bowls are shorter and that includes their spectacle of a halftime sideshow.

Over the last generation, MLB has gone Sabermetric crazy where apps, algorithms, and databases has replaced gut instincts, heart and hustle.

The spoiled players playing a kid’s game while getting rich see nothing wrong with bashing the country that protects their liberty to pursue their dreams.  Any Venezuelan taking part should be shipped back to that socialist South American paradise, pronto.

Those cardboard cutouts have better seats than I ever realized.  Like anything, follow the money as the cutouts are paid for by absent fans who have shelled out as much as $40/cutout.

Despite shrinking game attendance and television ratings, MLB’s balance sheet leaves many industries in envy.  However as the years continue to pass, the owners and players will feel the crunch.  The overly generous television contracts will end and the average fan base will be senior citizens watching their dwindling Social Security checks.

If MLB seemingly does not care, why should the paying fan?

Baseball fans know America has offered more opportunity to more people than any other country in history.  Those players taking a knee need to enlist in a Marine Corps rifle company and deploy, which would be the perfect remedy to remove the beam from their eyes.

Such behavior is only more proof that no avenue in American life can escape the Marxist bandwagon.

The once proud and independent national pastime has succumbed.

Take me out to the ball game?

Let me know when the high school season finally returns.

[Comment Guidelines - Click to view]
The Remnant values the comments and input of our visitors. It’s no secret, however, that trolls exist, and trolls can do a lot of damage to a brand. Therefore, our comments are heavily monitored 24/7 by Remnant moderators around the country.  They have been instructed to remove demeaning, hostile, needlessly combative, racist, Christophobic comments, and streams not related to the storyline. Multiple comments from one person under a story are also discouraged. Capitalized sentences or comments will be removed (Internet shouting).
The Remnant comments sections are not designed for frequent personal blogging, on-going debates or theological or other disputes between commenters. Please understand that we pay our writers to defend The Remnant’s editorial positions. We thus acknowledge no moral obligation whatsoever to allow anyone and everyone to try to undermine our editorial policy and create a general nuisance on our website.  Therefore, Remnant moderators reserve the right to edit or remove comments, and comments do not necessarily represent the views of The Remnant.
back to top
Last modified on Tuesday, August 4, 2020
Tweet

More in this category: « Procession to Consecrate Atlanta and Georgia to the Sacred Hearts of Jesus and Mary An Educational Homecoming »