Who Will Be the Next Pope?

So as the "mess" created by Pope Francis reaches critical mass, many are rather eagerly looking ahead to the next conclave to see who might finally succeed the most humble pope in history.

In his March 20, 2018 column at Crux.com, "Could O’Malley be the center-right candidate for the next pope?", acclaimed Vatican expert, John L. Allen, Jr, opined on this:

ANAHEIM, California - For one weekend every year, the two great Magic Kingdoms of the world collide in Anaheim, California, when Disneyland’s neighborhood is taken over by the Catholic Church for the Religious Education Congress of the Archdiocese of Los Angeles, the largest annual gathering of Catholics in North America.

For those 72 hours, Anaheim becomes Rome, in that it’s entirely possible that around every street corner, you’re going to bump into an old Catholic friend.

This Sunday, Crux’s Christopher White and I bumped into one such old friend, and over breakfast we had one of those conversations that people absorbed by Church affairs often do. My friend posed the following question: If there were a St. Gallen group of center-right cardinals today trying to prepare for the next papal conclave, who would their candidate be?

(The reference is to a group of progressive cardinals who met occasionally between 1995 and 2006 to talk about future popes, and who played a role in the election of Pope Francis. The existence of the group was confirmed in a biography of Cardinal Godfried Daneels of Belgium.)

White and I kicked the question around, and here’s what we came up with: Cardinal Sean O’Malley of Boston.

Comment: The most distressing thing about John Allen's prediction is that should it turn out to be prophetic (which I doubt), O'Malley wouldn't be the worst choice, the pool now swimming with papabile cardinals positively allergic to orthodoxy.

While a Pope Raymond Burke would require a direct act of God, a Pope Christoph Schönborn, Oscar Rodriguzez Maradiaga or Luis Antonio Tagle would seem almost inevitable, given the anti-Catholic bent of the new & improved Church of Accompaniment.

Believe it or nor, Cardinal O'Malley would be a step up from the rest, God help us all. 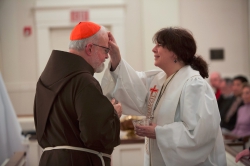 And here we have Cardinal Sean O'Malley at the Sudbury United Methodist Church back in 2014, receiving a special blessing from "Reverend" Anne Robertson (a United Methodist priestess), who described the moment on her blog, annerebertson.org:

Cardinal O'Malley looked me in the eye and asked me to anoint him.  I did.  The divorced, Scottish Protestant clergywoman anointed the Irish Catholic Cardinal in front of a pew of Catholic clergy and a Catholic Bishop, any one of whom would probably have given their eye teeth to have the honor.  I choked back sobs all the way to the overflow room.

And there you have it, Pope O'Malley would certainly have the ecumenical chops to succeed Pope Francis the Great. (How long, O Lord, how long.)

[Comment Guidelines - Click to view]
The Remnant values the comments and input of our visitors. It’s no secret, however, that trolls exist, and trolls can do a lot of damage to a brand. Therefore, our comments are heavily monitored 24/7 by Remnant moderators around the country.  They have been instructed to remove demeaning, hostile, needlessly combative, racist, Christophobic comments, and streams not related to the storyline. Multiple comments from one person under a story are also discouraged. Capitalized sentences or comments will be removed (Internet shouting).
The Remnant comments sections are not designed for frequent personal blogging, on-going debates or theological or other disputes between commenters. Please understand that we pay our writers to defend The Remnant’s editorial positions. We thus acknowledge no moral obligation whatsoever to allow anyone and everyone to try to undermine our editorial policy and create a general nuisance on our website.  Therefore, Remnant moderators reserve the right to edit or remove comments, and comments do not necessarily represent the views of The Remnant.
back to top
Last modified on Wednesday, April 11, 2018
Tweet