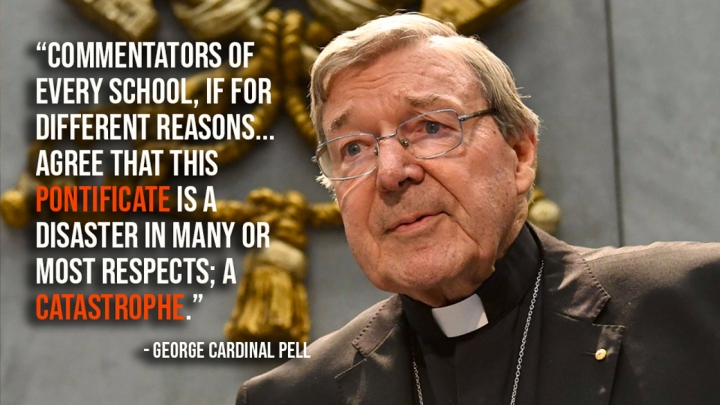 We Australians have been dealt a double-blow with the passing of George Cardinal Pell only a week after the death of the Pope Emeritus Benedict XVI. The news from Rome was completely unexpected: that His Eminence had died from complications due to a routine hip replacement.

Many Catholics here have special memories of George Pell, whether it was from shared meals, friendly conversations or from attending solemn liturgies over which he presided. A friend has a photograph of the Cardinal confirming him at the age of twelve; a priest-friend was then-Bishop Pell’s first ordination, others were able to visit him in prison, and so the list of memories flows on. Two of my own sons have stories of that kind: one served for Cardinal Pell at Latin Vespers during the 2008 World Youth Day in Sydney, another son happened to lunch with the Cardinal in Rome in 2011.

My great regret is that I was never able to meet the man. I like to think that we are good friends now though, since I prayed for him in life and continue to pray for the repose of his soul. I have hope that he does now, or soon will, intercede for me and for the Church from heaven.

Almost immediately after the Cardinal’s death, Vatican journalist Sandro Magister divulged that Pell was the author of a scathing critique of the Bergoglio administration, issued in early 2022 under the pseudonym, “Demos.” The memorandum referred to the current pontificate as “disastrous”, a “catastrophe”.

Although in many ways, Cardinal Pell was a product of his formation, he was also a great defender of tradition. It is true that he endorsed evolution in his famous debate with Richard Dawkins, and that his Novus Ordo Masses were celebrated facing the people, but his love of the old rite and desire for its continuance are also well-documented. His place on the liberal-traditional spectrum became irrelevant years ago, when good Catholics were obliged to defend this prominent churchman who was being unjustly accused of a heinous crime. While the Cardinal may have been guilty of failures in some areas, there is no doubt that he was innocent of the charges which led to his outrageous incarceration.

Almost immediately after the Cardinal’s death, Vatican journalist Sandro Magister divulged that Pell was the author of a scathing critique of the Bergoglio administration, issued in early 2022 under the pseudonym, “Demos.” The memorandum referred to the current pontificate as “disastrous”, a “catastrophe”; words which when used by traditionalists earn them labels such as “uncharitable” and “extreme”.

It is rather extraordinary that Anthony Fisher, Archbishop of Sydney, should deny that Cardinal Pell was “Demos”. [See video

around the 5 min. mark.] For one thing, his denial effectively labels the highly-respected Sandro Magister a liar. For another thing, there are similarities between the writing style of “Demos” and the Cardinal; similarities which had prompted some Australians to suspect from the beginning that Cardinal Pell was the memo’s mysterious author.

Fisher himself is playing a dangerous game these days. While once regarded as the pre-eminent pro-life voice among Australia’s bishops, his backflip on the morality of the experimental COVID treatments as well as his limp criticism of the Plenary Council have led many to conclude that he still considers himself a contender for the Cardinalate and will not do anything to jeopardise that possibility.  His Grace may soon come to realise that straddling both sides of the fence inevitably leads to a painful injury.

It will be interesting to see if the mainstream narrative around the current papacy will change in the wake of the Cardinal's strident comments.

Regarding Pell’s connection with the Demos letter, there is some evidence to back up the claim that he was its author. We know the writer was a Cardinal and the content shows that the writer had intimate knowledge of the inner workings of the Curia. An observant outsider may have known details of the Torzi hearing in London, or of the Pope’s multiple interventions in the trial of Becciu et al, but few could say with certainty that phone-tapping is practised regularly within the Vatican. Likewise, many know of the unjust treatment of Liberare Milone, but few would be able to comment authoritatively on the Vatican’s financial status.

In my possession is a letter written by Cardinal Pell from prison. As this letter represents my main link with the Cardinal, I will dwell on its provenance for a moment. Cardinal Pell wrote it in response to my request for a pastoral letter to the faithful which might help dispel the confusion which was rampant prior to the 2019 Amazon Synod. Remember, those were the pre-Pacha days, in which there remained in some quarters a small doubt - now dispelled - that Francis really was a destroyer, and not merely a misguided, idealistic Modernist.

My request included the proviso that the Cardinal’s wishes would be respected, should he not want the letter made public. His return letter mentioned no such stipulation so in its absence, I went ahead.

Publication of that letter led to a firestorm from within and without the Church: there were media reports of its release violating a little-known law which prohibits prisoners from using social media or the internet to post on their behalf. I received 3am texts telling me that Cardinal Pell’s appeal was in jeopardy; it was a stressful time. It eventually turned out that this law related only to content which attempted to influence a prisoner’s trial and, thankfully, there were no legal repercussions for His Eminence.

In his letter, the Cardinal wrote,

“One ancient saying teaches that there must be unity in essentials (Jesus’ essentials), while there can be diversity in non-essentials. But everywhere and in every thing we must have charity.”

In Point 6 of the memorandum, “Demos” writes in a similar tone, “Unity in the essentials. Diversity in the non-essentials. Charity on all issues.”

Surely it is time for the Church’s large Modernist-but-conservative faction to admit that it is reasonable for good Catholics to question the orthodoxy of a pope without undermining the papacy itself.

“The Apostolic Tradition, the teachings of Jesus and the Apostles, taken from the New Testament and taught by Popes and Councils, by the magisterium, is the only criterion doctrinally for all teaching on doctrine and practice. Amazon or no Amazon, in every land, the Church cannot allow any confusion, much less any contrary teaching, to damage the Apostolic Tradition.”

Similarly, in his posthumously-published letter to the Spectator, as well as in recent interviews, Cardinal Pell places great emphasis on the Apostolic Tradition. While not conclusive, this similarity in themes lends support to the claim that Pell and “Demos” were one and the same. Even in the unlikely case that Cardinal Pell was not the mysterious “Demos”, his “toxic nightmare” comments in the Spectator are just as explicit and controversial as the contents of the memorandum. Fisher and the other fence-straddlers really should come to terms with that.

After the Cardinal’s death, a friend shared the testimony of a woman who had known him for many years. She was involved in an outreach to marginalised people: to the homeless, the addicted, those with mental illness. At the request of a mentally-ill member of her group, Cardinal Pell had visited them to say Mass and share a meal. He decided to do this annually thereafter, and told his relatives how much he looked forward to visiting the group. This episode gives us an insight into the man who was regarded by some as cold and heartless.

“Cardinal Pell came every year that he was in Sydney. We celebrated his birthday each year and he shared the event with whoever else had a birthday round about then. He maintained his connection with us when he was in Rome, making sure that when we had to move to new premises the archdiocese was looking after us. He also continued his correspondence with a mentally ill lady who wrote to him often about her problems. Our people really missed him when he went to Rome. On one occasion the Cardinal obtained a Papal Blessing for one of our community members for his 80th birthday. This became the man's most precious possession.

“When he retires I would love to have the Cardinal work with us at David's Place. He thinks he is no good at street work, but he relates to our people so naturally, remembers their names and enquires after their concerns. He doesn't mind people calling out things like, " George, hey George! Look at this! " as happened once.”

This was Pell; this was the man I never knew, but about whom I have spent countless hours researching and writing. He wrote of me, too, mentioning me favourably in his first Prison Journal; perhaps it was a sign of his forgiveness for my hapless violation of confidentiality.

Vale, Your Eminence, George Cardinal Pell. Your death is a great loss for Australia, but you leave behind a great legacy: one of uncompromising moral strength.

It will be interesting to see if the mainstream narrative around the current papacy will change in the wake of the Cardinal's strident comments.  Surely it is time for the Church’s large Modernist-but-conservative faction to admit that it is reasonable for good Catholics to question the orthodoxy of a pope without undermining the papacy itself. Surely this group won't simply ignore the fact that Pell voiced from the Novus Ordo quarter what traditionalists have for years been voicing from theirs? One hopes that this conservative element will not continue on in its precarious state of cognitive dissonance, uneasily sweeping Pell’s “Demos” comments under the rug where the previous popes’ Assisi meetings lie undisturbed.

Vale, Your Eminence, George Cardinal Pell. Your death is a great loss for Australia, but you leave behind a great legacy: one of uncompromising moral strength. At a time when that quality is sorely absent from our hierarchy, may your example embolden other churchmen to fearlessly speak the truth in charity.

[Comment Guidelines - Click to view]
The Remnant values the comments and input of our visitors. It’s no secret, however, that trolls exist, and trolls can do a lot of damage to a brand. Therefore, our comments are heavily monitored 24/7 by Remnant moderators around the country.  They have been instructed to remove demeaning, hostile, needlessly combative, racist, Christophobic comments, and streams not related to the storyline. Multiple comments from one person under a story are also discouraged. Capitalized sentences or comments will be removed (Internet shouting).
The Remnant comments sections are not designed for frequent personal blogging, on-going debates or theological or other disputes between commenters. Please understand that we pay our writers to defend The Remnant’s editorial positions. We thus acknowledge no moral obligation whatsoever to allow anyone and everyone to try to undermine our editorial policy and create a general nuisance on our website.  Therefore, Remnant moderators reserve the right to edit or remove comments, and comments do not necessarily represent the views of The Remnant.
back to top
Last modified on Monday, January 23, 2023
Tweet

More in this category: « Viganò Homily on the Feast of the Chair of Saint Peter in Rome The DIE Penalty Box »