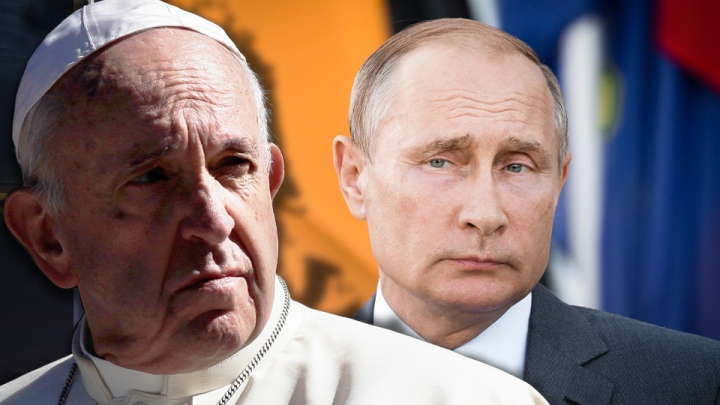 While there are varying theories about the sufficiency of the March 2022 consecration of Russia (and Ukraine) by the pope and virtually all of the bishops, we may ask what, if any, emerging trends since March 2022 suggest that the consecration is bearing at least some of the promised fruit.  Our Lady of Fatima promised that after the consecration was done in the manner She requested, Russia would be converted and the world would be granted a period of peace.  It was often suggested that these fruits would become obvious to the whole world as resulting from specific obedience to Our Lady’s request.

If you only listen to Western mainstream media, what follows may shock you.

To assess what is now emerging in the world, those of us who live in the West first need to free our perceptions from the blindness brought upon us by Western propaganda.  If you only listen to Western mainstream media, what follows may shock you.  In the United States (US) especially, we need to remember that true patriotism does not equate with love of the current ruling regime, but rather with love of the fatherland, and yearning for one’s nation to be free of political corruption and instead to be promoting justice and prosperity for the common people.  Since being the undamaged victor in World War II (then producing 50% of world GDP) the US has become ruled by a top 0.1%, a “deep state” of the well-connected that renders many elected officials mere puppets of “big money.”

The West has transformed itself into an aggressive world empire, centered in Washington and London, and controlling powerful vassal states such as the United Kingdom (UK), European Union (EU), Canada, Australia, and Japan.  With 750 military bases across 80 nations providing de facto occupation of much of the developed world, the empire is routinely obeyed, given tribute (largely by stealth), and not prone to tolerate dissent (now commonly known as “disinformation.”)  The empire has brought the world endless local wars, regime change where possible, and utter destruction of states daring to stand up against its hegemony (e.g. Afghanistan, Iraq, Libya, Syria, etc.)  Current foreign policy in Washington demands that the world remain “unipolar,” with only one superpower, the US.

In 2014, the US spent a billion dollars overthrowing the legitimately elected democratic government in Kiev, and installed a puppet regime beholden to US empire demands.

Therefore, the current long-term goal is to bring about regime change in Russia and China.  NATO encroachment upon Russia’s borders was long tolerated by Russia, which sought to become an equal partner with the West in a peaceful multi-polar world based on the level playing field of international law.  But the US empire would have none of this.  In 2014, the US spent a billion dollars overthrowing the legitimately elected democratic government in Kiev, and installed a puppet regime beholden to US empire demands.

The Kiev puppet regime hated all things Russian, and from 2014 to 2022 constantly shelled its own civilians in eastern Ukraine, where the populations are ethnic Russians.  Kiev even outlawed the use of the Russian language.  Kiev had planned a massive military operation against the Donbass region of eastern Ukraine for March 2022, so finally Russia had to send troops into eastern Ukraine to protect the people from continued genocide by the Kiev regime.  Russia had by then accepted the fact that the US empire was never voluntarily going to allow nations like Russia and China to be treated as equal partner nations in a multi-polar world.  Russia realized that the US empire plan was to effect regime change in Moscow, and then dismember Russia and steal its vast resources for the enrichment of Western oligarchs.  After that, China would be next.

But in recent years a key group of nations outside the US empire’s control finally awakened to this scenario.  They had grown weary of the US manipulating the entire world financial system by controlling the world’s “reserve currency”, the US Dollar.  So the BRICS nations banded together:  Brazil, Russia, India, China, and South Africa.  Other nations are beginning to join this bloc, and recently this includes Saudi Arabia.  The “third world” is waking up to the reality that there can be no peace, and no justice for the common man, as long as the US Empire continues to effectively enslave the world and extract tribute through its military and financial powers.

The war in Ukraine is really a proxy war, with Ukraine fighting Russia on behalf of the US empire.  The war is being waged to determine whether the world will continue to be unipolar, or whether a multi-polar world can once again emerge.

The US is now a fading empire, and history shows that empires losing their grip often lash out violently like a cornered beast.  The war in Ukraine is really a proxy war, with Ukraine fighting Russia on behalf of the US empire.  The war is being waged to determine whether the world will continue to be unipolar, or whether a multi-polar world can once again emerge.  The vast majority of nations understand this, and do not condemn Russia for intervening to stop the relentless genocide in eastern Ukraine.   Nor do they deny the right of oppressed peoples to vote to change their government to a form more suited to their aims (such as the five regions of Ukraine, so far, that have voted overwhelmingly to join the Russian Federation.)  As the European economy is devastated by energy shortages caused by US-enforced sanctions against Russia, even the EU vassal states may begin to realize that the US empire is not their friend, but rather their master.

Related from RTV — PUTIN'S WAR: Biden, Soros, and the Ghost of John McCain

World peace will probably emerge as the world returns to a multi-polar system based on the rule of law (that is, an equal playing field for everyone, with predictable and dependable rules.)  This is what the BRICS nations seek.  The US has instead insisted upon a “rules based order” where the US makes (and changes) the rules, and every one else submits or gets bombed.  Most of the world will no longer tolerate this.  So, from the perspective of most of the world (and contrary to US empire propaganda,) as Russia inevitably wins the war in Ukraine and stops the US empire from continuing to enforce a unipolar world, nations are becoming free to set up new economic systems using various currencies, and to have a level playing field for international commerce based upon mutual benefit.  Truly free markets are being sought, in which the rigging of prices by the US hegemon will gradually cease.

The US vassal states in Europe have been economically decimated by the idiotic anti-Russian sanctions imposed by the empire. Perhaps this will soon spur them to assert their own independence, to seek their own national interests.   The profligate money-creation by the US regime has triggered huge inflation at home.   Recently  79% of US citizens are telling polls that the US is seriously on the wrong track.  Mankind was shown at the Tower of Babel that a unipolar world is not consistent with heaven’s plan.  The dispersal of world power into multiple centers of local power, each with its own respected “sphere of influence,” will provide a natural system of checks and balances that will tend to promote a period of peace for the world.  The rapid decline of the US empire may well be the cause of a coming period of peace for the world.  So the waning of the US empire, and the rise of many cooperating nations forming a new multipolar world order, may actually be the beginning of the promised period of peace for the world.

Mankind was shown at the Tower of Babel that a unipolar world is not consistent with heaven’s plan.  The dispersal of world power into multiple centers of local power, each with its own respected “sphere of influence,” will provide a natural system of checks and balances that will tend to promote a period of peace for the world.  The rapid decline of the US empire may well be the cause of a coming period of peace for the world.

What about the conversion of Russia?  That may be a gradual process.  The current occupant of the Chair of Peter seems to be entirely in the thrall of the anti-Christian Western empire that is now waning.  Russia is gradually becoming increasingly Orthodox Christian -- but has a long way to go to eradicate the cultural corruption that the Western world empire has insinuated into the Russian nation, especially among certain wealthy Russian elite who had partnered with the West.  We can only assume that through some miracles we cannot yet see, the powers in the Vatican will eventually convert back to the one true Catholic faith, and Orthodox Russia will then be drawn to come back into union with that truly Catholic Rome.  Please, Lord, may it come quickly!

What then shall we Americans say about our native United States?  We shall say that we love her, and that we will pray and work for her to become once again truly great:  God-fearing, moral, rightly educated, industrious, and generous toward but not dominating other nations.  May she cease to be an empire, and instead become one great nation among a family of nations, centered on the principles enshrined in her Constitution and Bill of Rights.  May the socialists and communists and anti-Christian left-wing radicals be driven from power in all her institutions.  May she gradually become a truly Christian nation, and eventually a majority Catholic nation.  For the greatness of our beloved nation must lie not in the power to dominate other nations, but rather in the moral uprightness of her people -- for that goodness is the precondition for true justice and prosperity.  Let us pray and work to make America great again -- yes, much greater than ever before.

NOTE:  The opinions expressed in this article are those of the author, and do not necessarily reflect the opinions of this newspaper.
___________

* Russian Sunrise is a 2011 novel by Bruce W. Walters MD, exploring what wonderful world-changing events might emerge following the consecration of Russia as requested by Our Lady of Fatima.  It is now out of print, but can be downloaded and read for free online at https://www.fatima.org/wp-content/uploads/2018/02/Russian-Sunrise.pdf

[Comment Guidelines - Click to view]
The Remnant values the comments and input of our visitors. It’s no secret, however, that trolls exist, and trolls can do a lot of damage to a brand. Therefore, our comments are heavily monitored 24/7 by Remnant moderators around the country.  They have been instructed to remove demeaning, hostile, needlessly combative, racist, Christophobic comments, and streams not related to the storyline. Multiple comments from one person under a story are also discouraged. Capitalized sentences or comments will be removed (Internet shouting).
The Remnant comments sections are not designed for frequent personal blogging, on-going debates or theological or other disputes between commenters. Please understand that we pay our writers to defend The Remnant’s editorial positions. We thus acknowledge no moral obligation whatsoever to allow anyone and everyone to try to undermine our editorial policy and create a general nuisance on our website.  Therefore, Remnant moderators reserve the right to edit or remove comments, and comments do not necessarily represent the views of The Remnant.
back to top
Last modified on Tuesday, January 17, 2023
Tweet
More in this category: « Strike Back at the Empire! A Cooked-Up Nanny State Crockpot »