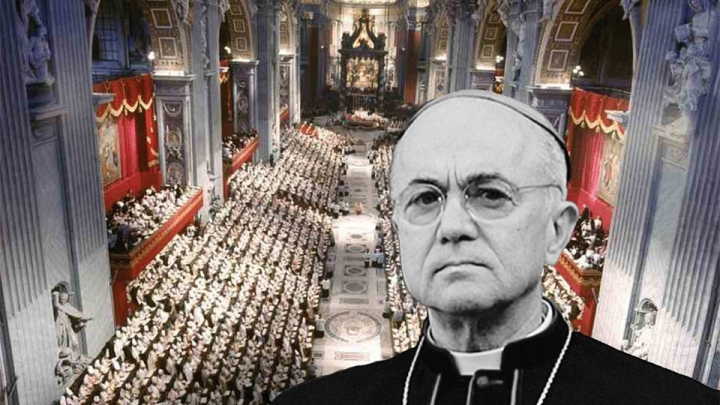 Thank you for sending Abbé…'s question to me regarding the reform of Holy Week.

I agree with him that the reform can effectively be considered a sort of trial balloon with which the architects of the subsequent conciliar reform introduced an entire series of modifications – which in my opinion were entirely questionable and arbitrary – to the Ordo Majoris Hebdomadæ as it existed up until that time.

I would say in fact that this modification may have appeared almost harmless, albeit bizarre, because the mens that had given birth to them was not yet apparent either with the reform of John XXIII or with the much more devastating reform inaugurated by the Constitution Sacrosanctum Concilium and then further exasperated by the Consilium ad exsequendam; but that which for a parish priest in 1956 may have seemed like a simplification dictated by the exigencies of adapting the complexity of the rites of Holy Week to the rhythms of modernity – and that probably was presented as such to Pius XII himself, keeping its explosive significance hidden – acquires quite another sense from our perspective, since we see at work in it first of all the casual pruning mentality of the modernists and the students of the never-deprecated-enough rénouveau liturgique; and in the second place because we recognize in the decisions that were supposedly made to simplify the ceremonies the same ideological imposition of the most daring innovations of the Novus Ordo. Finally, the personalities who stand out in that reform include the protagonists of the conciliar reform, promoted to higher positions precisely because of their notorious aversion to the solemnity of worship: it is difficult to think that what they started between 1951 and 1955 was not conceived as a first step towards the upheavals brought to completion less than twenty years later.

I do not agree with the co-existence of two forms of the same rite in the Church of the Roman Rite... I consider the reformed rite to be gravely lacking and certainly favens haeresim, joining myself to the denunciation of Cardinals Ottaviani and Bacci as well as that of Archbishop Marcel Lefebvre.

Of course, the air one breathes in certain parts of the rite of Pius XII – I am thinking of the Pater Noster recited by the celebrant and the faithful, for example – is the same air that we find in the Novus Ordo: one perceives “something” foreign and unnatural, which is typical of works that are not inspired by the Lord and that are obviously human, imbued with a rationalism that has nothing truly liturgical about it but that reeks of gnostic presumption that Pius XII rightly condemned in the immortal encyclical Mediator Dei. It is astonishing that these same errors that were providentially condemned in 1947 succeeded in re-emerging in the very reform that Pius XII himself promulgated: let us not forget, however, that the Pontiff was at an advanced age and very physically and spiritually exhausted by the recent global conflict. Including Pius XII on the list of demolishers of the Tradition would be as unjust as it would be ungenerous.

Having said this, it remains to be assessed whether the same exceptions raised for the Novus Ordo Missae promulgated by Paul VI by the Apostolic Constitution Missale Romanum of 3 April 1969 apply to the rite promulgated by Pius XII by the Decreee Maxima Redemptionis Nostræ Mysteria of 16 November 1955. Or better: given that the Motu Proprio Summorum Pontificum recognizes the right of Catholics to avail themselves of the preceding rite because of its ritual, doctrinal and spiritual specificity, and given that the Motu Proprio does not enter into the merit of an evaluation of the orthodoxy of the Novus Ordo but limits itself to a question of liturgical taste, so to speak, may we extend this principle to the rites preceding John XXIII’s Motu Proprio Rubricarum Instructum and Pius XII’s Decree Maxima Redemptionis Nostræ Mysteria, expressing our “preference” for the so-called rite of Saint Pius X?

I am convinced that the Novus Ordo should simply be abolished and prohibited and the traditional rite should be declared the only Roman Rite in force.

This is actually a provocation. First of all, because I do not agree with the co-existence of two forms of the same rite in the Church of the Roman Rite. Secondly, because I consider the reformed rite to be gravely lacking and certainly favens haeresim, joining myself to the denunciation of Cardinals Ottaviani and Bacci as well as that of Archbishop Marcel Lefebvre, and I am convinced that the Novus Ordo should simply be abolished and prohibited and the traditional rite should be declared the only Roman Rite in force. It is only from this point of view that I believe that it is possible to canonically “challenge” the Ordo Hebdomadæ Sanctæ Instauratus and, if we wish to be meticulous, the Motu Proprio Rubricarum Instructum as well, above all because of the consistency of their tone with the Novus Ordo and their obvious rupture with the tone of the preceding Missale Romanum.

Now, given the vacatio legis in which we find ourselves, I believe that if the Fraternity of Saint Pius X considers it legitimate to refer to the Missal of John XXIII because it recognizes the same malicious mind in all of the subsequent reforms that led to the Missal of Paul VI, then for the same reason – mainly of a prudential nature – it could apply the same principle to the reform of Holy Week, even if in itself – because in the Missal of John XXIII there is nothing heterodox or even remotely inclined towards heresy.

This, I believe, was the reason that Archbishop Lefebvre chose precisely the rite of 1962. On the other hand, since he had a juridical mind thanks to his solid formation, he understood well that it would not be possible to apply a sort of “free examination” to the Liturgy, because this would authorize anyone to adopt any rite. At the same time, however, the subversive nature of the conciliar reform did not escape him (just as it does not escape us today): intentionally open to execeptions ad experimentum, to an infinite number of ad libitum, under the pretext of recovering a supposed original purity after centuries of ritual sedimentation. Precisely for this reason, Archbishop Lefebvre decided to return to the less-compromised rite, the rite of 1962, perhaps without grasping some of the controversial aspects of the reforms made by Pacelli and Roncalli that only an expert liturgist would have grasped, especially during the troubled years of the 1970s. Let us not forget furthermore that the Rénouveau Liturgique began in France well before it developed in Italy, and that many innovations that later became the norm of the universal Church were experimented as early as the 1920s in French dioceses, beginning with the use of Gothic vestments and the altar versus populum, always in the name of that archaeologism that attempted to cancel an entire millennium of the life of the Church with the stroke of a pen. I imagine that in the eyes of an Italian prelate, celebrating coram populo with a medieval chasuble appeared to be an extravagance, while for a French archbishop it was by then an established and in some ways even an encouraged practice.

Archbishop Lefebvre decided to return to the less-compromised rite, the rite of 1962, perhaps without grasping some of the controversial aspects of the reforms made by Pacelli and Roncalli that only an expert liturgist would have grasped, especially during the troubled years of the 1970s.

We must also understand – and in this regard I believe that I have expressed myself extensively – that the mens of the reform that began at the local level well before Pius XII and then progressively spread throughout the Catholic world was completely anti-juridical: its architects availed themselves of the authority of the Legislator in order to impose with the force of law a rite that was supposed to be everything other than a slavish application of the liturgical text; the Missal was no longer supposed to contain the texts that the celebrant was meant to faithfully recite, but was looked at rather as a sort of canvas that authorized the worst eccentricities and insinuated in the ecclesial body an inexorable loss of the sense of the sacred. This was not yet visible in the Ordo Hebdomadæ Sanctæ Instauratus, nor in the Missal of John XIII; but the principle of the perpetual changeability of the rite and its casual updating (along with the erroneous persuasion that it has become corrupted with the passage of centuries and that as such it needs to be “pruned” by superfetations, when instead it is actually the result of a harmonious development given by circumstances, time, and places) was already in place. And certainly, the modification of the Roman Canon by Roncalli with the insertion of the name of Saint Joseph went in the same direction, touching even the most ancient and sacred prayer of the Holy Sacrifice.

I conclude with an observation. Many communities that make use of the Motu Proprio Summorum Pontificum celebrate the rites of Holy Week following the Missal prior to the reform of Pius XII: the Ecclesia Dei Commission itself authorized this dispensation, considering the reasons given by those who asked for it to be legitimate. Therefore, I do not see why the Fraternity, which has been at the forefront of the guarding of the Traditional Mass in much more difficult times, cannot do the same. Certainly, when the Church re-finds herself, all of this will have to be brought back into the riverbed of the law; a law that, we may hope, will wisely take into account the criticisms that have been raised.

I hope that these considerations I have offered may be helpful in some measure to Reverend Abbé...

I am grateful for the occasion to impart my paternal blessing to you all, dear friends.

[Comment Guidelines - Click to view]
The Remnant values the comments and input of our visitors. It’s no secret, however, that trolls exist, and trolls can do a lot of damage to a brand. Therefore, our comments are heavily monitored 24/7 by Remnant moderators around the country.  They have been instructed to remove demeaning, hostile, needlessly combative, racist, Christophobic comments, and streams not related to the storyline. Multiple comments from one person under a story are also discouraged. Capitalized sentences or comments will be removed (Internet shouting).
The Remnant comments sections are not designed for frequent personal blogging, on-going debates or theological or other disputes between commenters. Please understand that we pay our writers to defend The Remnant’s editorial positions. We thus acknowledge no moral obligation whatsoever to allow anyone and everyone to try to undermine our editorial policy and create a general nuisance on our website.  Therefore, Remnant moderators reserve the right to edit or remove comments, and comments do not necessarily represent the views of The Remnant.
back to top
Last modified on Tuesday, May 10, 2022
Tweet

More in this category: « Doubling Down CHRISTOPHOBIC GLOBALISM: Preparing Children for Persecution »