The First Words of Christ - Spoken for Today? 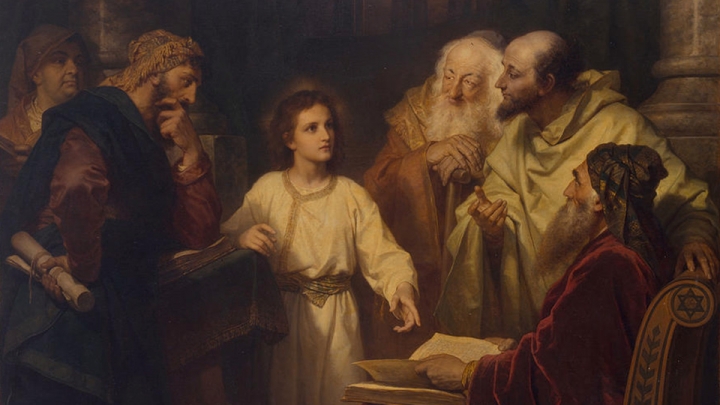 Planet Earth in the year 2022 is going to be a rough place for Catholics, given the ongoing perfect storm formed by government authoritarianism and Church modernism. It will be even rougher for those Catholics who love the Tradition of the Faith. Readers are likely familiar with Pope Francis’ Motu Proprio (Traditionis Custodes) of last summer curtailing the Traditional Latin Mass, as well as the noose-tightening letter issued in December by the Congregation for Divine Worship. Much has already been written about these, including commentary from two well-known PhD’s, Maike Hickson and Peter Kwasniewski.

In a recent blog, Dr. Hickson suggests that we are living in a time when crises in both Church and society are being allowed by God “so that mankind can amend its ways and find its way back to Him.” Later in the piece, she poses a scenario … that Vatican actions amid the crises, intended to squelch and isolate the Traditional Latin Mass, may actually help us “follow the Plan of God which surely is to unite Catholics of good will and mend our ways.” There would be hurdles along the way, one in particular, and here she invokes freshly-minted, poignant words from Dr. Kwasniewski. He calls on leaders of the traditional communities for a “Lefebvre Moment,” when priestly organizations honorably respond to Church authorities with “We cannot, in good conscience, comply with these prescriptions. Throw at us any penalties or punishments you wish; we will ignore them all, because they will have no force.” The confidence required to take such a bold stance can only be acquired after a mighty wrestling match with the powerful vow of obedience.

The confidence required to take such a bold stance can only be acquired after a mighty wrestling match with the powerful vow of obedience.

Since Vatican II, obedience has been at the heart of debates, especially about the Mass. We hear many thoughtful arguments and positions, but one that gets little attention is by a Jesuit writer, Father Henry James Coleridge. In his 1886 work The Mother of the King, Fr. Coleridge reflected on Christ’s first recorded words - in the Gospel of St. Luke Chapter 2, verses 49-51.

“How is it that you sought me?  Did you not know that I must be about my Father’s business?” And they understood not the word that he spoke unto them… His mother kept all these words carefully in her heart.

Nineteen words embedded in the fifth joyful mystery – Christ’s first documented words and the only words from His first thirty years conveyed in Scripture. Is it even possible to think them not important?

In his Ninth Chapter of Book II, titled The Mystery of the Twelfth Year, Fr. Coleridge points out that if Christ “had expressed to His parents the slightest wish to remain in Jerusalem for three more days … they would willingly have remained with Him.” But of course He hadn’t - and the Blessed Mother and St. Joseph endured much sorrow as a result. “The one most remarkable point in the mystery … is that He left Our Lady and St. Joseph without a word of warning, because He was called to something which belonged to that work of His Father which He came into the world to do.”

The question for all is “do we obey God or do we obey man?”

Why did Jesus, perfect in all things, choose disobedience on this occasion? Fr. Coleridge’s answer:

“… if there were any sphere of conduct or duty as to which obedience to parents, and even consideration for their wishes and feelings, might be out of place for the perfect follower of Our Lord, it might be necessary that there should be some example in His life as to this, in which deviation from uniformity of obedience might be set before us, as the conduct of our Lord Himself.  For it would not be well that Christians should be left to conjecture or reasoning in such a matter.”

And as for its relevance to the faithful through time?

“The occasions for such conduct are numberless in life, and they are parallel to those other cases in which the law or command of a legitimate ruler, who has his authority from God, must be set aside in order that we may obey the decrees of God Himself, and of these we may use the words of the Apostles to the rulers of the holy nation, that we must obey God rather than man.”

And why is this incident so important that God provides for its preservation in Sacred Scripture?

“The example of our Lord on this occasion was to cover even what may be extreme cases … The time was to come when it would be most important for the Church that it should be fully understood.…Many grateful souls must have owed their salvation or their peace to the doctrine founded on this example of our Lord.”

I’d like to emphasize Fr. Coleridge’s words “the time was to come when it would be most important for the Church that it should be fully understood.” Surely now is such a time, when we are told by the highest authority to banish the Mass of the Ages and replace it with a liturgy devised by modern man. Dual crises in society and in the Church sound the alarm. Our priests are called to their “Lefebvre Moment” and the faithful are called to support them. The question for all is “do we obey God or do we obey man?”

- R.J. Wenzel is the author of Why Your Children Won’t Get To Heaven

Michael Matt on the Fatima Consecration
The NEW WORLD OVER? (Why Resets Fail)

[Comment Guidelines - Click to view]
The Remnant values the comments and input of our visitors. It’s no secret, however, that trolls exist, and trolls can do a lot of damage to a brand. Therefore, our comments are heavily monitored 24/7 by Remnant moderators around the country.  They have been instructed to remove demeaning, hostile, needlessly combative, racist, Christophobic comments, and streams not related to the storyline. Multiple comments from one person under a story are also discouraged. Capitalized sentences or comments will be removed (Internet shouting).
The Remnant comments sections are not designed for frequent personal blogging, on-going debates or theological or other disputes between commenters. Please understand that we pay our writers to defend The Remnant’s editorial positions. We thus acknowledge no moral obligation whatsoever to allow anyone and everyone to try to undermine our editorial policy and create a general nuisance on our website.  Therefore, Remnant moderators reserve the right to edit or remove comments, and comments do not necessarily represent the views of The Remnant.
back to top
Last modified on Tuesday, March 29, 2022
Tweet
More in this category: « Hunter’s Pandora’s Laptop THE GREAT PRIVILEGE: Sharing in the Nature of Christ »