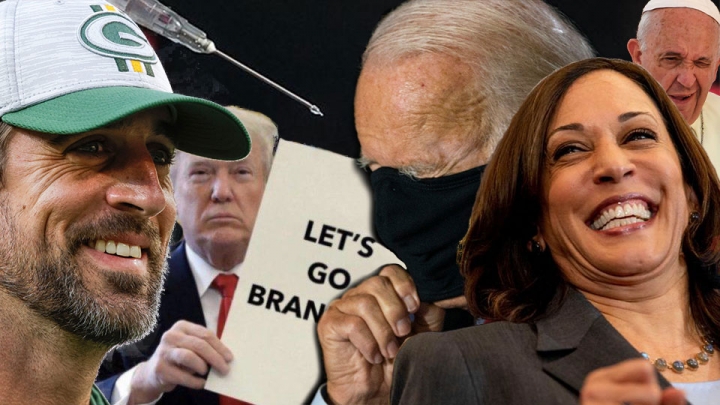 As the days gradually begin to lengthen and 2021 has been deposited into the annals of history, the time for the annual Rearview Awards has arrived.

Prick of the year: Dr. Tony Fauci, a Brooklyn native no less, seems to take joy in every new COVID variant and then doubles down on the inoculation and booster express.

Greatest lie: Politicians embellish and exaggerate, but Joe Biden’s claim that his “Build Back Better” legislation “costs zero dollars” is the year’s biggest and grandest canard.

Preeminent photo: A total of six photos where Mark Zuckerberg morphs into Jen Psaki. Ironically, you never see the two of them together.

Political bozo: George W. Bush who politicized 9/11 by equating it to the Capitol Hill protests on January 6, 2021. I expect that from Democrats, but GWB? Telling.

Question of the year:  Have you seen anyone wearing a Build Back Better hat?

Snowflake medal:  Santa Claus. The jolly elf has been barred on campuses throughout our fruited plain from saying his longstanding “ho-ho-ho” because it offends Kamala Harris.

Broken clock plaque: Joe Biden was actually right. Last January, Biden said of the COVID vaccine: “I don’t think it should be mandatory.”

Best Meme: The difference between CNN and the Titanic is, CNN had all its anchors when it sank.

Name of the year: Apophis. The name was the ancient Egyptian spirit of evil and destruction.  Apophis is an asteroid that will come closer to earth than most satellites.  It is  scheduled to pass us on April 13, 2029. NASA defines it as “one of the most important near-Earth asteroids ever discovered” and provided the asteroid were to hit the earth Apophis would cause “major damage to our planet and likely to our civilization as well.”

Wittiest farewell: Bob Dole saying he hopes heaven is as beautiful as Kansas and that he looks forward to voting in Chicago.

Snowflake medal:  Santa Claus. The jolly elf has been barred on campuses throughout our fruited plain from saying his longstanding “ho-ho-ho” because it offends Kamala Harris.

Truly duplicitous: Joe Biden driving through Rome in an 85-car motorcade to meet Pope Francis and strategize about how to overcome the “climate crisis.”

Company of the year: Fenix Ammunition of Michigan asks visitors to their website if they voted for Biden. If so, they are redirected to Biden’s campaign homepage preferring not to sell to Biden’s supporters because he is the most anti-gun presidential administration in history.

Word of the year: Altricial: An adjective describing those who are helpless and require parental care lasting decades. It’s synonym: Snowflake.

Most miserly:  Bucknell football had a promotion where they would donate $100 to a local food bank for every sack this season. They were at $200 by week five. Bucknell should have donated $100 for every point their porous defense allowed as the local food bank would have reaped a windfall of $41,700.

To honor the memory of my longtime friend and U.S. Marine who, along with his son, gave his life in the defense of their home during Hurricane Sandy in Staten Island, the ninth annual John Filipowicz Ironman Award: Kulpmont, PA native son, Walter Lutz.  Lutz, a septuagenarian, took on a healthy dose of the historic and challenging Appalachian Trail throughout the summer in order to raise funds for a new fire truck for the volunteer Kulpmont Fire Department.

There is much more but space is limited. No need to fret. In order to keep this New Year’s party going, part two is next week.

[Comment Guidelines - Click to view]
The Remnant values the comments and input of our visitors. It’s no secret, however, that trolls exist, and trolls can do a lot of damage to a brand. Therefore, our comments are heavily monitored 24/7 by Remnant moderators around the country.  They have been instructed to remove demeaning, hostile, needlessly combative, racist, Christophobic comments, and streams not related to the storyline. Multiple comments from one person under a story are also discouraged. Capitalized sentences or comments will be removed (Internet shouting).
The Remnant comments sections are not designed for frequent personal blogging, on-going debates or theological or other disputes between commenters. Please understand that we pay our writers to defend The Remnant’s editorial positions. We thus acknowledge no moral obligation whatsoever to allow anyone and everyone to try to undermine our editorial policy and create a general nuisance on our website.  Therefore, Remnant moderators reserve the right to edit or remove comments, and comments do not necessarily represent the views of The Remnant.
back to top
Last modified on Thursday, December 30, 2021
Tweet

More in this category: « CHRISTMAS DOWN UNDER: Tyranny’s Greatest Tragedy Another SUPER DUPER Update on TC: Has Pope Francis Done It Again? »