WALL STREET BUBBLES ARE ALWAYS THE SAME: All Dollars and Little Sense 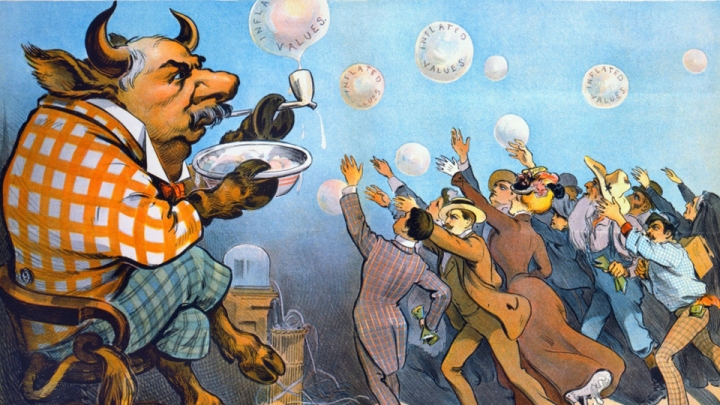 The stock market bull rally that got underway after a giant fall last February and ushered in the COVID era has been relentless.  Who would believe record highs were even possible after such a swift drop during a pandemic, followed by political turmoil and civil chaos.

After the Federal Reserve cut interest rates again and went on a printing spree pumping trillions into the economy through three stimulus packages, the benchmark S&P 500 and the Dow Jones Industrial Average were catapulted to virgin territory.  Likewise, we are in the midst of a cryptocurrency revolution where their hourly values run like an amusement park roller coaster.

With the M1 Money supply – the amount of liquidity available for spending – also at an all-time high at $18.4 trillion, the potential for one of the biggest economic booms in U.S. history is primed.

You cannot ignore the laws of physics, gravity, or economics, as the government is spending itself into oblivion.

This optimism has predicted a strong 2021 second half.

The larger concern is 2022 and beyond.

Historically, long periods of low interest rates combined with a growing federal debt is no yellow brick road to Oz. You cannot ignore the laws of physics, gravity, or economics, as the government is spending itself into oblivion.  From 2010 to 2019, the aggregate GDP growth was nearly the same Uncle Sam spent in COVID stimulus.

Can you whisper bubble?  Such a pop would result in a fiscal 9/11 and catch many nascent investors napping.

Can you whisper bubble?  Such a pop would result in a fiscal 9/11 and catch many nascent investors napping.  Many were too young to recall the dot-com bubble burst over a generation ago and will pay dearly.

As the stock market rolls along, so does the national deficit.  In fact, it seems to be about the only thing that is mushrooming faster.  This should concern plenty, but along the D.C. Beltway such matters are dismissed.

Do not confuse a bull market for brains.

Stock trading has drawn plenty of new players armed with their “stimmy.”  Rather than paying bills, buying necessities, or paying down their debts, these emerging investors have turned day trading into gamification.  With success they gain confidence and buy more shares, but the market’s present trajectory won’t last.  When it drops many will see it as a fire-sale opportunity.

The stock app at center stage is aptly named Robinhood having taken its namesake from the English Democrat who robbed from the rich and redistributed their wealth.  In this stimulus era of Robinhood fever and GameStop, why waste time researching good companies at reasonable prices, and then waiting years for returns to compound?

Apps like Robinhood, SoFi, Webull, and Public.com can be fun, but addictive, and a bookkeeping nightmare.

Such internet trading platforms make basic tax-abating strategies difficult to implement.  Buying and selling stocks by the lot can lower your tax bill by choosing which shares to sell.  However, selling specific lots are difficult or impossible to do online as sales are based on a first-in-first-out (FIFO) basis, where the oldest shares are sold first.

These time-honored tactics may be the least of their concerns when the market turns because it will. Once the public buys in, time is short and the potential for disaster gains momentum. When the melt down commences, nearly everyone will lose more on the way down than they made on the way up.  Melt Downs do not end quickly, but over time.  If the market is one thing – it is unforgiving.

Market peaks are clear in retrospection, but not in the moment, but the warning signs are there.

Do not confuse a bull market for brains.

As the timeworn adage rings: “Markets can remain irrational longer than you can remain solvent.” That applies for booms, too.

Most people do not have an exit plan like trailing stops that protects your gains and prevents you from losing more money.  A diversified portfolio and fixed selling points is always your friend.

[Comment Guidelines - Click to view]
The Remnant values the comments and input of our visitors. It’s no secret, however, that trolls exist, and trolls can do a lot of damage to a brand. Therefore, our comments are heavily monitored 24/7 by Remnant moderators around the country.  They have been instructed to remove demeaning, hostile, needlessly combative, racist, Christophobic comments, and streams not related to the storyline. Multiple comments from one person under a story are also discouraged. Capitalized sentences or comments will be removed (Internet shouting).
The Remnant comments sections are not designed for frequent personal blogging, on-going debates or theological or other disputes between commenters. Please understand that we pay our writers to defend The Remnant’s editorial positions. We thus acknowledge no moral obligation whatsoever to allow anyone and everyone to try to undermine our editorial policy and create a general nuisance on our website.  Therefore, Remnant moderators reserve the right to edit or remove comments, and comments do not necessarily represent the views of The Remnant.
back to top
Last modified on Wednesday, April 21, 2021
Tweet

More in this category: « SSPX Pastor on COVID Vaccinations FRANCIS THE MERCIFUL AND JEFFREY SACHS: Moving the Goalpost in Human Trafficking »