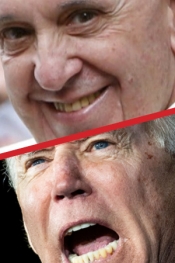 Pope Francis’s recent condemnation of “the movement” associated with the tragic events at the U.S. Capitol should come as no surprise to faithful Catholics who have seen him condemn even the mildest and most faithful members of his supposed spiritual flock.

“Thank God,” he said, “that this has burst into the open and is clear to see well.”

Unless Reuters has misquoted the pope, the apparent meaning is that he is grateful for, and attributes to the benevolence of God, the tragic events so that the people involved may be properly condemned. In this respect he completely shares the sentiments of his high-ranking spiritual children, including Biden, Pelosi, and AOC.

Faithful Catholics have long experience not only with the pope’s condemnations but also his ability to seemingly annihilate truth and still retain enough benefit of the doubt to continue his fight against true Catholicism. Inexplicably, he apparently never crosses the line of actual heresy in a way that would lead to his removal. And yet we all know that if we were simply evaluating the man by his words and deeds, without considering his title, we would never believe he was a Catholic.

Indeed, we would not hesitate to rank him among the greatest enemies of the Church. Whereas his spiritual children in the United States will soon hold us captive through economic and legal coercion, he holds us captive by virtue of his ability to technically retain the title of Vicar of Christ despite his unambiguous opposition to Christ’s Church.

Another link between Pope Francis and his spiritual children is the bizarre way in which they choose to give us their playbook under the pretense of describing what their enemies do. Consider, for instance, paragraph fourteen of Fratelli Tutti, describing cultural colonization:

These are the new forms of cultural colonization. Let us not forget that ‘peoples that abandon their tradition and, either from a craze to mimic others or to foment violence, or from unpardonable negligence or apathy, allow others to rob their very soul, end up losing not only their spiritual identity but also their moral consistency and, in the end, their intellectual, economic and political independence.’”

In the preceding paragraph of Fratelli Tutti, Francis set forth some of the the actual methods of the cultural colonization program:

If someone tells young people to ignore their history, to reject the experiences of their elders, to look down on the past and to look forward to a future that he himself holds out, doesn’t it then become easy to draw them along so that they only do what he tells them? He needs the young to be shallow, uprooted and distrustful, so that they can trust only in his promises and act according to his plans. That is how various ideologies operate: they destroy (or deconstruct) all differences so that they can reign unopposed. To do so, however, they need young people who have no use for history, who spurn the spiritual and human riches inherited from past generations, and are ignorant of everything that came before them.”

This is what the “Catholic” innovators have accomplished in the Church since Vatican II. They have convinced Catholics to ignore their history and reject tradition. In so doing, they have imposed an entirely new culture, with its novel theologies and practices. Although Francis appears to denounce cultural colonization, he is in fact a central player in the most comprehensive cultural colonization program in history.

Why have they done this? As we now see, those who wish to remake the world — to “build back better” — must preserve some semblance of the old structures. With respect to the Catholic Church, they recognize that at least some men and women will always adhere to the institution that Jesus Christ assured His disciples would never completely fail. As such, the innovators need to give the “faithful” an apparent substitute church, one that claims to be Catholic but supports the globalist (anti-Catholic) agenda. This substitute church also lends its imprimatur to the various anti-Catholic measures necessary to build back better.

And, as we may soon see, the globalists will be able to more forcefully denounce traditional Catholics to the extent that their beliefs and practices deviate from those of the “official Church.” We already see this occurring with the Chinese Catholic churches.

All of this also fits with Biden’s program of building back better, which requires Americans to lose their sense of history and culture so that they can fully embrace beliefs and practices that recently were repugnant to most Americans. So history books are rewritten, statues and flags are destroyed, holidays are changed, and new American heroes are found. We are now told it is anti-American to hold beliefs that almost all Americans held until recently; and true patriots are those that stand for all that Americans fought against.

Of course not all Americans can be brainwashed so easily. Accordingly, recalcitrant citizens must be demonized. Thus we find Biden using the tragic events at the U.S. Capitol to describe (and implement) a key aspect of the cultural colonization program — the Big Lie. Instead of simply making reasoned arguments about why he believes Senators Cruz and Hawley should have ignored the allegations of election fraud, he compared them to Nazi propagandist Joseph Goebbels, adding that: “I think the American public has a real good, clear look who they are . . . they’re part of the big lie.”

As Biden continued to ramble about how effective and sinister it is to repeat lies, and especially to have many other people repeat the lies, surely informed Americans of good will recalled the enormous lies that were instrumental in Biden’s election “success”: that shutting down the economy and vastly expanding the use of mail-in ballots were appropriate responses to Covid (that just so happened to also sabotage President Trump); that the ANTIFA and BLM riots that destroyed cities and terrorized citizens were peaceful, laudable, and sure to continue if Trump were reelected; that nobody could call into question election results, suggest improper interference, or even obtain a proper investigation of the voting irregularities; and that the Democrats have too much respect for the Constitution to allow Vice President Pence to challenge state certifications. The Democrats certainly do not have a monopoly on Big Lies, but they have now made it clear that they will make full use of them to build back better.

Clearly we must reject falsehood and steadfastly maintain what is true. We must restore and defend authentic Catholic culture. As the Church has repeatedly taught, we ought to stay close to the traditional Catholic sacraments. It is a great blessing that many Catholics have found the Tridentine Mass, but it is worth recalling that the architects of Vatican II, and those who approved and implemented its reforms, had spent their entire Catholic lifetimes attending the same Mass and learning the Church’s timeless teachings. Authentic Catholic practices are essential but will not suffice if we are similarly disposed to accept changes to aspects of the Faith that can never change.

To this end, St. Pius X’s Oath Against Modernism required “all clergy, pastors, confessors, preachers, religious superiors, and professors in philosophical-theological seminaries” to swear, among other things, that they would maintain the authentic Catholic doctrines:

I sincerely hold that the doctrine of faith was handed down to us from the apostles through the orthodox Fathers in exactly the same meaning and always in the same purport. Therefore, I entirely reject the heretical misrepresentation that dogmas evolve and change from one meaning to another different from the one which the Church held previously.”

Pope Paul VI’s regime removed the obligation to say the oath, but the need to say it increased dramatically and remains today. If we do not have this fundamental attitude and resolve about our Catholic Faith, why would we bother to believe?

The cultural colonization program will almost certainly continue until we do what Our Lady of Fatima told us to do: all of us must pray for ourselves and others (including the pope), repent of our sins, amend our lives, and perform penance; and the pope must consecrate Russia to the Immaculate Heart of Mary. We are, sadly, seeing the consequences of ignoring her message. As Our Lord told Sister Lucia:

Make it known to My ministers, given that they follow the example of the King of France in delaying the execution of My command, they will follow him into misfortune. It is never too late to have recourse to Jesus and Mary. Like the King of France, they will repent of it, and they will do it, but it will be late. Russia will have already spread its errors in the world, provoking wars and persecutions against the Church. The Holy Father will have much to suffer.”

More and more, we are seeing the spread of Russia’s errors, even to the United States. “It is never too late to have recourse to Jesus and Mary,” but we will regret every moment of delay.

[Comment Guidelines - Click to view]
The Remnant values the comments and input of our visitors. It’s no secret, however, that trolls exist, and trolls can do a lot of damage to a brand. Therefore, our comments are heavily monitored 24/7 by Remnant moderators around the country.  They have been instructed to remove demeaning, hostile, needlessly combative, racist, Christophobic comments, and streams not related to the storyline. Multiple comments from one person under a story are also discouraged. Capitalized sentences or comments will be removed (Internet shouting).
The Remnant comments sections are not designed for frequent personal blogging, on-going debates or theological or other disputes between commenters. Please understand that we pay our writers to defend The Remnant’s editorial positions. We thus acknowledge no moral obligation whatsoever to allow anyone and everyone to try to undermine our editorial policy and create a general nuisance on our website.  Therefore, Remnant moderators reserve the right to edit or remove comments, and comments do not necessarily represent the views of The Remnant.
back to top
Last modified on Monday, January 11, 2021
Tweet

More in this category: « Deploying the Airbags Archbishop Viganò’s Considerations on the promotion of the vaccine by the Holy See »