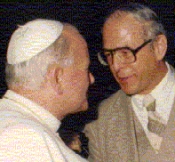 After a long and hard-fought battle with dementia, the longtime editor of The Wanderer, Alphonse J. Matt, Jr., passed away peacefully on December 8, 2019. He was 88 years old.

For those new to The Remnant, let me briefly provide some historical context:

The Wanderer is the oldest Catholic weekly newspaper in the country. In 1867, the German-language newspaper, Der Wanderer, was founded by two Benedictine monks then serving the Assumption Church in St Paul, Minnesota.

In the wake of the political revolutions in Germany in the late 1840s, the dangerous new ideas of the German “enlightenment” had been growing in popularity and influence among German Catholics, even German immigrants living in the United States.

This influence was rooted in the anti-Catholic, Masonic juggernaut that ultimately would help give rise to Hitlerism itself in Germany. These two monks, in trying to counteract this influence, founded a newspaper, Der Wanderer, to help educate German immigrants, not only in their German Catholic heritage, but also in the dangers of Masonry’s Anti-Catholic agenda.

After two years of editing Der Wanderer, they felt the need to bring in a professional editor so that they might devote themselves to their priestly duties. Their choice for a replacement was my great-grandfather, Hugo Klapproth.

The Wanderer as it appears today (in English) was established by Klapproth’s son-in-law, my grandfather, Joseph Matt, KSG.

Longtime readers of The Remnant will surely recall the decades-long civil war that ripped the Matt Family in half after the close of the Second Vatican Council. Throughout the 1970s, 80s and 90s, my cousin, Alphonse, was at the Wanderer’s helm, his father (my uncle) having passed away in 1973.

Serious disagreements notwithstanding, I’d be the first to admit that Alphonse Matt devoted his life to the service of Holy Mother Church. His defense of orthodoxy and Catholic moral teaching was substantial. And after years of betrayal at the hands of wayward shepherds that left us all bruised and battered, I’m sure my own father of happy memory would be more than content to let the historical record show that it was the Revolution itself that left our Catholic family bitterly divided for nearly half a century.

My father and his brother, Alphonse, Sr, made peace with each other some forty years ago, but their two newspapers remained bitterly at odds over the nature of the crisis in the Church and the proper course of action to take on her behalf.

Despite principled differences of opinion, they each attempted to be faithful to Mother Church, despite the crisis that slowly brought her to her knees. One side of the family believed that, no matter what, obedience to Rome was paramount, while the other saw resistance to Rome as unavoidable.

This, of course, was the dilemma that millions faced at the time and, without a doubt, the civil war in my family was the same one that would divide the entire Church, pitting father against son, brother against brother and cousin against cousin.

In life, the Revolution drove a wedge through the heart of my family. And on the occasion of Al Matt’s death, I welcome this opportunity to denounce that Revolution — not my cousin! — for what happened to our family and to so many other families in the post-conciliar chaos that followed Vatican II.

These days we're all casualties of that same Revolution which tore my family in half but which has now grown old and embittered, drifting so far to the Left that where Rome is concerned today, both The Wanderer and The Remnant can be summarily dismissed as bomb-throwing extremists.

This article appears in the December 31 Remnant Newspaper.
To read the rest, Subscribe Today!

In fact, Rome’s slouching towards apostasy today would seem to be uniting that which it divided so many years ago. And although it would be premature to claim that the Matt ‘Clan’ is fully reunited, it's only a matter of time before all faithful Catholics will unite against the infiltrators from St. Paul to St Peter's who will do all in their power to destroy Christ's Church – over our dead bodies, if need be.

The current editor of The Wanderer, Joseph Matt (eldest son of Alphonse), and I enjoy a cordial relationship, thanks be to the God both of our fathers strived to know, love and serve in this life. May they both now be happy with Him forever in the next life, and may the Revolution never divide their sons again. Time to unite the clans!

In your charity, please remember the repose of the soul of Alphonse Matt in your prayers this Christmas. May he rest in peace.

And Merry Christmas to all the Catholic clans around the world. May the Christ Child unite us all in the Hope and Love that fills the hearts of all those who follow the star out of the darkness of the desert and into the light of Bethlehem. Puer natus in Bethlehem, Alleluia. ■

[Comment Guidelines - Click to view]
The Remnant values the comments and input of our visitors. It’s no secret, however, that trolls exist, and trolls can do a lot of damage to a brand. Therefore, our comments are heavily monitored 24/7 by Remnant moderators around the country.  They have been instructed to remove demeaning, hostile, needlessly combative, racist, Christophobic comments, and streams not related to the storyline. Multiple comments from one person under a story are also discouraged. Capitalized sentences or comments will be removed (Internet shouting).
The Remnant comments sections are not designed for frequent personal blogging, on-going debates or theological or other disputes between commenters. Please understand that we pay our writers to defend The Remnant’s editorial positions. We thus acknowledge no moral obligation whatsoever to allow anyone and everyone to try to undermine our editorial policy and create a general nuisance on our website.  Therefore, Remnant moderators reserve the right to edit or remove comments, and comments do not necessarily represent the views of The Remnant.
back to top
Last modified on Friday, December 27, 2019
Tweet

More in this category: « Merry Christmas: Waiting for the Christ Child THE TWO POPES: Two Enthusiastic Thumbs Down »