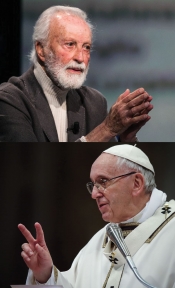 In this week’s Sunday sermon from south St. Paul, Father discusses the ramifications of a catholic denying either the divinity of Christ or His Resurrection. Drawing from Sacred Scripture, Father points out how those who deny either one can according to St. Paul, be rightly condemned as an anti-christ.

One of the many subplots of the recent Synod in Rome involved a bizarre accusation by a friend of Francis, a journalist, who claimed that Francis told him that he does not believe Jesus Christ was Divine while He walked the Earth.

Given the severity of the scandal, why would Francis NOT clarify what he believes?

The scandal, therefore, is up to Francis to rectify, which is why Father asks the question of the Pope: Does your silence signify consent?

Donate to our Tax-Exempt Foundation

[Comment Guidelines - Click to view]
The Remnant values the comments and input of our visitors. It’s no secret, however, that trolls exist, and trolls can do a lot of damage to a brand. Therefore, our comments are heavily monitored 24/7 by Remnant moderators around the country.  They have been instructed to remove demeaning, hostile, needlessly combative, racist, Christophobic comments, and streams not related to the storyline. Multiple comments from one person under a story are also discouraged. Capitalized sentences or comments will be removed (Internet shouting).
The Remnant comments sections are not designed for frequent personal blogging, on-going debates or theological or other disputes between commenters. Please understand that we pay our writers to defend The Remnant’s editorial positions. We thus acknowledge no moral obligation whatsoever to allow anyone and everyone to try to undermine our editorial policy and create a general nuisance on our website.  Therefore, Remnant moderators reserve the right to edit or remove comments, and comments do not necessarily represent the views of The Remnant.
back to top
Last modified on Monday, November 18, 2019
Tweet

More in this category: « The Whole (Hi)Story Behind the Conversion of St. John Henry Newman DEATH PENALTY ACCORDING to FRANCIS: A Response to Trent Horn’s “Can Doctrine Ever Change” »