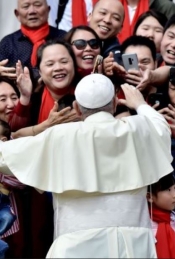 The three-part deal sought to clarify the manner of episcopal appointments, with the atheistic regime appointing bishops that were then approved by the Vatican, the status of the seven illegitimate bishops and the future of the faithful “underground” Catholic Church. Incredibly, the Vatican agreement with China allows the communist-controlled Chinese “Catholic” Patriotic Association (CPA) to nominate Catholic bishops and instructs the Underground Church to unite with it. 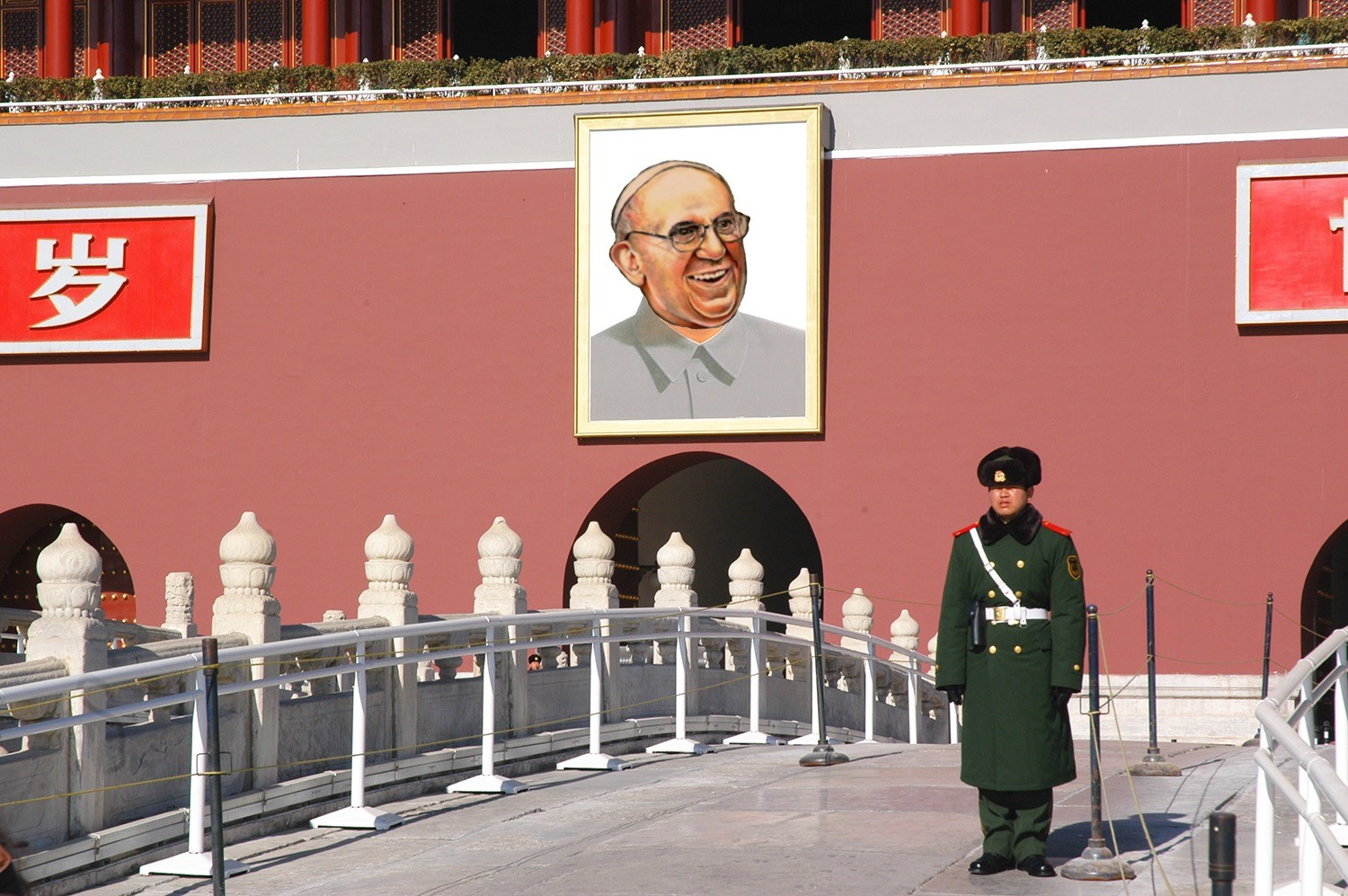 “For you, a new age of the catacombs will begin. It will be winter. It will be hard on you. The government will seize your churches. The priests will no longer be able to administer the sacraments. All that will be left for you is to go home to farm the land.”

Zen alerted his faithful priests and predicted that persecutions would begin if the Vatican signed a deal with the ChiComms.

Zen accurately described the Vatican deal as “suicide” and a “shameless surrender” to the Communist Government. As if on command, the devastation predicted by Zen has begun. Yet, the Vatican remains stonily silent and issues no protestations.

No one knows the Chinese government better than Cardinal Zen. This feisty and fearless 87-year-old prelate saw the handwriting on the 40-foot Vatican wall. He recognized that the Vatican was desperate for a deal, any deal. “In recent years, the almost unrestricted desire for dialogue to reach an outcome has weakened our Church in China.”

No fool for the ChiComms, Cardinal Zen warned the Vatican about the malevolent tactics of Chinese authorities:

“We cannot rule out the danger of deception. The Chinese are masters at playing with words. The gentlemen in the Vatican are no match. Moreover, for the Communists there is no truth; truth is what is needed for the success of the party.”

The Vatican clearly got played, badly played by the Communist Chinese. Not only did the Vatican cede its spiritual authority to an atheistic, totalitarian, brutal regime but, in so doing, it seriously endangered the faithful underground Catholic Church of 6 million Chinese Catholics.

The blind Chinese human rights activist lawyer Chen Guangcheng also blasted the Vatican deal over the selection of bishops as “preposterous” and “a slap in the face to millions of Catholics and other faithful religious people in China who have suffered real persecution under the CCP.”

Chen, who personally endured violence and torture at the hands of the CCP, bitterly described the Christian suffering as a result of this terrible Vatican deal:

“I am sure that the active members of underground churches in China who have persevered against crippling persecution for so long can only feel betrayed.”

The ruthless Chinese Communist government surely detected Vatican weakness during the negotiations, thus setting the stage for its dechristianization demolition. The world is now witnessing a brutal assault, an open season on the practice of Christianity in China.

Early in his pontificate, in June of 2013, Francis launched his Vatican-Sino rapprochement by dispatching Cardinal Ted McCarrick to China. McCarrick proved to be a curious and troubling choice.

Although Francis was informed of McCarrick’s reputation as a notorious sexual predator, he sent him anyway. Francis wanted access and McCarrick would open the doors for the Vatican negotiations with the Chinese government officials, who knew Cardinal McCarrick since he had visited China often.

McCarrick described himself as “a habitual visitor” to China. He boasted that he was friends with high level Chinese government officials. No doubt, the Chinese intelligence service took special note of this compromised papal envoy. McCarrick was someone they could work with, based on his friendship and sympathy toward the ChiComms. Curiously, speculation has recently been raised by Catholic media that McCarrick was a long-time Communist agent.

Did the famously verbose McCarrick let the Siamese cat out of the bag? Was McCarrick suggesting that the Vatican was maneuvering for a papal invitation to Communist China? Is the Vatican willing to throw the faithful underground Catholic Church to the Communist wolves in exchange for a historical papal trip?

Cardinal McCarrick obsequiously remarked to the Global Times that the similarities between Pope Francis and President Xi Jinping could be “a special gift for the world.” Tell that to the underground Chinese Catholics who watched in horror as their churches and bibles were burned by the authorities, following the deal.

The ChiComms knew they had the upper hand in the negotiations when the Vatican envoy sounded more like a communist party member than a Prince of the Church. McCarrick, like Francis, showed a propensity to curry favor with totalitarian regimes, much like Cuba and Iran. Who could forget the unnerving gesture in 2015, when Pope Francis met Bolivian Marxist President Eva Morales and accepted a crucifix adorned with a hammer and sickle?

Cardinal Zen understood the nature of Communism. He daily witnessed and experienced its brutal reality. Chairman Mao famously threatened that, “communism is not love. Communism is a hammer we use to crush the enemy.”

The Vatican continued its campaign of Chinese bootlicking throughout the negotiations. In February 2018, Argentine Bishop Marcelo Sanchez Sorondo, head of the prominent Pontifical Academy of Social Sciences, commented about China that set off a jaw-dropping global gasp throughout the Christian world. Sorondo observed that “right now, those who are best implementing the social doctrine of the Church are the Chinese.”

Incredibly, Sorondo applauded China for implementing Pope Francis’s eco encyclical, Laudato Si “better than many other countries” and praised it for defending the Paris Climate Accord. Sorondo is evidently ignorant of the World Health Organization polluted cities data, which places China as the leader on the list with 287 of the 500 most polluted cities in the world.

Chinese Propaganda Promulgated by the Vatican

Wait, there’s more windmill gushing from the Vatican and Sorondo. To the utter horror of the global pro-life movement and in light of the brutal one-child policy of the PRC, Sorondo observed that “China is assuming a moral leadership that others have abandoned.”

The Vatican propaganda machine continued to roll out lavish praise for the ChiComms—again, as Cardinal McCarrick gushed over the similarities between President Xi and Pope Francis:

"A lot of things that China worries about, [Pope Francis] worries about—about the care of poor, older people, children, our civilization and especially the ecology. I see a lot of things happening that would really open many doors because President Xi and his government are concerned about things that Pope Francis is concerned about," the cardinal said.

Oh, how touching— just picture the two leaders chatting about the poor, the children (those that survive the China one-child policy) and the climate, strolling along the Great Wall of China! The Vatican is hopelessly naive to trust China’s compliance because it signed the Paris Climate Treaty. Most astute observers scoff at the Chinese climate hypocrisy. This atheistic totalitarian regime rarely abides by any of its agreements or honors its pledges.

Do you subscribe to the oldest Traditional Catholic Newspaper in the world?

The Vatican’s pitiful and submissive fawning signaled to the Chinese that they owned the upper hand in the negotiations. The Chinese intuit the lesson of Sun Tzu, the ancient Chinese military general:

“When envoys are sent with compliments in their mouths, it is a sign that the enemy wishes a truce.”

After the deal was signed, Francis claimed that “both sides lost something in the talks.” Then he casually noted that members of the underground Chinese Church ‘will suffer’ as a result of the deal. Think about that bizarre, harsh and cruel concession by the ‘humble and all merciful’ Pope. Is this Francis’ idea of progress and religious freedom by increasing the pain and persecution for members of his own Church?

The “suffering” freely conceded and breezily acknowledged by the Vicar of Christ involves the wholesale surge in coldblooded religious persecution, after his very own negotiated deal.

“In recent years, the almost unrestricted desire for dialogue to reach an outcome has weakened our Church in China. They even say that a bad deal is better than no deal. This is absolutely incomprehensible!”

Zen aptly described the deal as “the whole world sees the state of religious freedom in China go from bad to worse.”

So, as the Chinese proverb cautions, “a bad beginning makes for a bad ending.”

Pray for the Persecuted Church in China.

[Comment Guidelines - Click to view]
The Remnant values the comments and input of our visitors. It’s no secret, however, that trolls exist, and trolls can do a lot of damage to a brand. Therefore, our comments are heavily monitored 24/7 by Remnant moderators around the country.  They have been instructed to remove demeaning, hostile, needlessly combative, racist, Christophobic comments, and streams not related to the storyline. Multiple comments from one person under a story are also discouraged. Capitalized sentences or comments will be removed (Internet shouting).
The Remnant comments sections are not designed for frequent personal blogging, on-going debates or theological or other disputes between commenters. Please understand that we pay our writers to defend The Remnant’s editorial positions. We thus acknowledge no moral obligation whatsoever to allow anyone and everyone to try to undermine our editorial policy and create a general nuisance on our website.  Therefore, Remnant moderators reserve the right to edit or remove comments, and comments do not necessarily represent the views of The Remnant.
back to top
Last modified on Monday, April 15, 2019
Tweet

More in this category: « St. Hermenegild, April 13 Purification of Notre Dame by Fire »